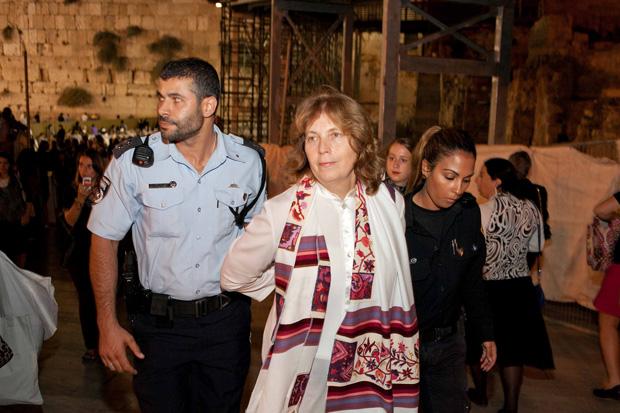 Israeli police arrest Anat Hoffman after she said the Shema Israel prayer at the Western Wall in Jerusalem, Oct. 16, 2012. Photo: Women of the Wall

TEL AVIV — Last week’s episode was hardly the first time Israeli police stopped activist Anat Hoffman while she was leading a women’s prayer service at the Western Wall in violation of Israeli law.

But this time, police actually arrested Hoffman — a first, she says — and the incident appears to be galvanizing liberal Jewish groups in the United States and Israel.

In the United States, the Union for Reform Judaism called for a police investigation and expressed its dismay to Michael Oren, Israel’s ambassador in Washington. The United Synagogue for Conservative Judaism announced a global “Shema flash mob” for Monday — a nod to the prayer Hoffman was reciting when she was arrested.

In Israel, the Israel Religious Action Center, which Hoffman leads, launched a petition to the Supreme Court requesting that the Western Wall Heritage Foundation, which runs the holy site also known as the Kotel, change its decision-making process to include non-Orthodox Jews.

“There is no voice around that table for women, for the paratroopers who liberated the Wall, for the variety of pluralist voices,” Hoffman, who is also chairwoman of Women of the Wall, told JTA. “We want to dismantle this body. If the Wall belongs to the Jewish people, where are the Reform, Conservative, secular?”

For now, however, there is no grand coordinated strategy to challenge the laws governing Israel’s holy site, which bar women from praying while wearing a tallit prayer shawl or tefillin, or from reading aloud from the Torah. In a 2003 Israeli Supreme Court decision, those rules were upheld on the ground that “local custom” at the Wall did not allow for such practices.

So with Women of the Wall intent on continuing its practice of organizing a women’s prayer service at the site every Rosh Chodesh — the beginning of the Hebrew month — another incident likely is not far off.

Hoffman’s arrest during last week’s Rosh Chodesh service on the evening of Oct. 16 garnered more attention than previous incidents in which Hoffman was detained but not arrested. Hadassah, which was holding its centennial celebrations in Jerusalem, had sent some 200 women to pray with Hoffman, giving a significant boost in numbers to the service, which totaled about 250 women.

After Hoffman was arrested, she claims Israeli police chained her legs and dragged her across the floor of a police station, leaving bruises. She also claims that police ordered her to strip naked, and that she spent the night in a cell without a bed. She was released the following morning after agreeing to stay away from the Kotel for 30 days.

Israeli police spokesman Mickey Rosenfeld said Hoffman’s claims about her treatment are “not accurate and not right.”

As the incident received wide coverage in the American Jewish media, the condemnations of Hoffman’s arrest poured in, particularly from women’s groups such as the Women’s Rabbinic Network and the National Council for Jewish Women. Hadassah’s national president, Marcie Natan, told JTA that Hadassah “strongly supports the right of women to pray at the Wall.”

Yizhar Hess, executive director of Israel’s Conservative movement, said that if Hoffman actually is charged with a crime, it would force a reexamination of the rules governing the Western Wall.

“It’s not an easy experience to be accused in criminal law, but it will take this debate to a different phase: What can be done and what cannot be done in the Western Wall plaza,” Hess said.

Hoffman says she wants the courts to allow her group to pray for one hour per month at the Wall, and ideally wants the Wall’s council to allocate some time for prayers without mechitzah — the divider that separates men and women. She sees an opening in the Supreme Court’s reliance on “local custom” as the basis for upholding the current rules. The The Israel Religious Action Center’s petition aims to change who defines “local custom.”

Shari Eshet, director of the National Council of Jewish Women’s Israel office, said legal initiatives are the best way to effect change on the issue.

“With all of the screaming and yelling and American Jews banging on the table, at the end of the day this is a land with a court system,” Eshet said. “We need to find another way to bring this back into the court system.”

Leaders of some religiously pluralistic American Jewish groups admit that their efforts to date on this issue have not worked. Some hope that Hoffman’s arrest will galvanize their constituents anew.

“This is a moment for us to think differently,” said Rabbi Rick Jacobs, president of the Union for Reform Judaism. He said his organization was considering an array of options and that more details would be forthcoming in a matter of weeks.

“We’ve been very reactive thus far to these circumstances when they come,” he said. “Whatever strategies that we’ve been doing previously are not enough because this issue in recent years is getting progressively more difficult and troublesome.”

In Israel, groups working for religious pluralism face a dual challenge: They are fighting legal and legislative battles on a range of issues, and most Israelis are not motivated to join the fights — especially when it comes to the Western Wall.

“Israelis view the Wall as something not relevant to day-to-day life,” Hess said. “What could have been a national symbol to connect Jews from all over the world is now only an Orthodox synagogue.”

Women of the Wall could attract more of an Israeli following if it linked its cause to other religious freedom issues, said Rabbi Uri Regev, president and CEO of the Israeli pluralism organization Hiddush. “As emotionally attractive and justified as Women of the Wall is, there are bigger and more compelling issues,” like legalizing non-Orthodox Jewish marriage in Israel or funding non-Orthodox Jewish rabbis, he said.

Hoffman says she hopes Diaspora Jews will push the issue with Israeli leaders. Wernick says he wants the Jewish Agency for Israel’s board of governors to put the issue of women praying at the Western Wall on its agenda. He also is pushing for a meeting with Israeli Prime Minister Benjamin Netanyahu about it. USCJ, however, will not press for a new Israeli law on the matter, he said.

“We’re not Israeli citizens and we respect Israel’s right to determine its own course,” Wernick said.

Hoffman says, “The Western Wall is way too important to be left to the Israelis.”

Click here for complete coverage on the 2012 elections from JTA.