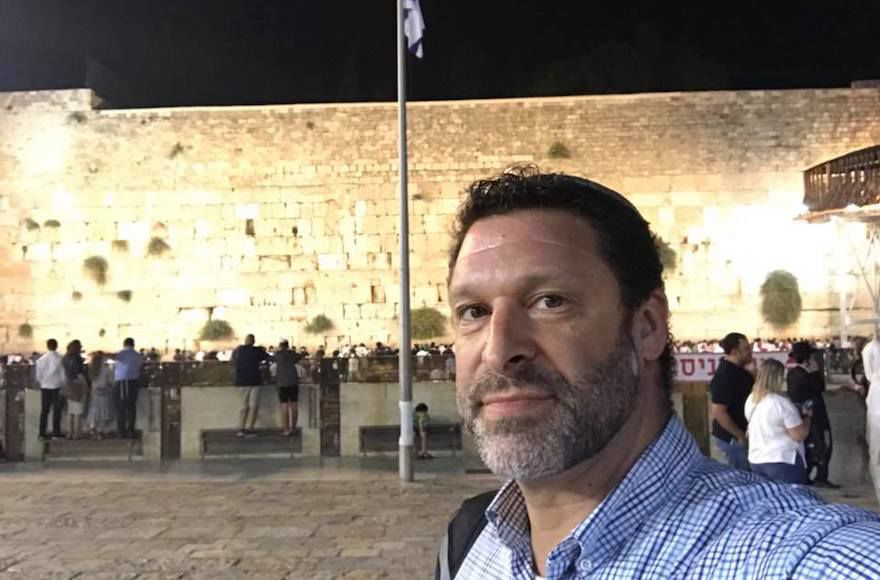 Ari Fuld at the Western Wall in Jerusalem. (Facebook)

JTA
JERUSALEM (JTA) — An employee of a falafel shop at the Gush Etzion junction said the Palestinian teen who stabbed Ari Fuld was running at her brandishing his knife when Fuld shot him.

After he was stabbed, Fuld, an American and Israeli citizen who served in the Israeli army and continued to serve in the reserves, ran after the stabber, then planted his feet and shot at him before collapsing to the ground. He was pronounced dead at a Jerusalem hospital after resuscitation efforts failed. A civilian bystander also shot the assailant, who remains in a Jerusalem hospital with slight injuries.

The attack and Fuld’s actions were captured by surveillance cameras.

Hila Peretz told Israel’s 10 News that she had served Palestinian assailant Khalil Jabarin, 17, the falafel platter he had purchased from the shop and that he sat on a railing outside the shop for about 45 minutes before pulling out a knife and stabbing the 45-year-old father of 4.

She said that after the teen stabbed Fuld, he began running toward her brandishing the knife. She said she started running away from him shouting “terrorist.”

“I started running down the stairs but he jumped to try to get in front of me. The man that was killed really saved my life,” she said of Fuld.  “He’s not just a hero. He gave his life for me.”