With the help of a NYC synagogue, two young Ukrainian Jewish refugees will soon marry in Israel

(New York Jewish Week) — Following an incredible journey of survival that began in Kyiv in February, passed through Belarus and finally ended in Israel in April, Yakov Poluden, 28 and Malka Bukreeva, 21, refugees from Ukraine, plan to marry on July 10 in Tiberias, a city on the shore of Israel’s Lake Kinneret.

The wedding will take place thanks to the support of many individuals and organizations — including a $15,000 donation to help pay for the ceremony from the Altneu, a new congregation on the Upper East Side that was founded by Rabbi Benjamin Goldschmidt and his wife Avital Chitzik-Goldschmidt last fall.

Helping refugees in Ukraine was one of the first initiatives that the pair put together as heads of the new synagogue, which they started after Goldschmidt was ousted as assistance rabbi at Park East Synagogue. “When we thought about fundraisers and doing campaigns, one of the most important things was that we raise [money] not just for our institution, but for those in need,” Chitzik-Goldschmidt, whose family is from Kyiv, told the New York Jewish Week.

The story of how Poluden and Bukreeva safely fled their home, got together and got engaged is an unlikely one — about as unlikely as a Manhattan synagogue paying for their wedding. But, as  Chitzik-Goldschmidt explained: “We also believe in supporting people directly rather than going through an organization where there’s unclear overhead costs.”

The couple’s story began last year at the Beis Aharon veYisorel Yeshiva in Kiev, which is run by Rabbi Yitzchok Kozlov and his wife, Naomi Kozlova. Poluden, a yeshiva student, was in charge of the boy’s dormitory; Burkeeva, who had attended the yeshiva as a high school student and returned after getting a college degree in nursing, was the head of the girl’s dormitory.

“She was my right hand,” Naomi Kozlova said of Burkeeva, who had gradually become more observant during her year working at the yeshiva. In fact, Burkeeva had expressed to her that she was ready to find a shidduch — a marriage prospect — who was dedicated to living a religiously observant life.

“We never considered [Poluden] for a match for Malka,” Kozlova said. “I don’t know why.”

According to Burkeeva, it was because the two hardly got along as heads of the dormitories. Poluden, she told the New York Jewish Week, only messaged her when he needed something for the boy’s dormitory, and she was often frustrated by his lack of communication. “He seemed weird to me,” Burkeeva said. “I was annoyed by him.” Burkeeva refused to consider a shidduch with him.

Things between the two started to change in February 2022. With a Russian invasion on the horizon, the yeshiva community had been warned to leave Kiev earlier in the month. The group had relocated to Medzhybizh, a small town in Western Ukraine. On Feb.25, the day after the invasion, the community was evacuated once again to Belarus — they were told only hours beforehand that they would be leaving for the Ukrainian-Belarussian border on Saturday, Feb. 26, a Shabbat morning. Suddenly, the Kozlovs, as well as Burkeeva and Poluden, were part of a group of about 100 people associated with the yeshiva who were all trying to get safely out of the country. More than a dozen were students younger than 15, who were in the Kozlovs’ care in the dormitories.

Burkeeva watched as Poluden, the quiet but sometimes annoying yeshiva boy, transformed into a leader and a hero. In Medzhybizh, he worked at a call center helping organize evacuations out of Ukraine. He corralled the younger children and helped keep everyone calm.

“Everyone kept telling me, ‘look, he’s a good boy, he’s good with kids!’” Burkeeva said. “I began to think about what going on a date with him would be like.”

By the end of February — thanks, in part, to Poluden’s efforts — the community was able to relocate to Pinsk, Belarus. Though they were safe from Russian fire in Belarus, the ultimate goal was for the community to relocate to Israel. The group remained in Belarus throughout March and April, and days were spent in long lines waiting for their documents to be processed in order to get on a flight to Israel. There was no time for dating, even if Burkeeva had thoroughly warmed up to the idea of a formal meeting with Poluden.

Eventually, Poluden was accepted into Israel along with a large group from the community, but Burkeeva’s documents were held up. She had to wait in Belarus for another three weeks.

It was during that period that Burkeeva realized she had been thinking about Poluden — even planning to say yes if she were asked on a date while they lived in Pinsk. “Before all of this, I didn’t want anything to do with him,” she said. She was surprised to find herself upset when he left for Israel, wondering if she’d missed her chance.

By the time Burkeeva made it to Israel on April 14, she convinced herself on the flight over that Poluden was the one for her. Kozlova remained in Belarus, although she used her network to orchestrate the couple’s first date from afar. In more observant communities, like Burkeeva’s and Poluden’s, couples go on a number of “shidduch dates” before deciding to marry, a process that can take weeks or months.

The date was planned for April 18 — Poluden did little to redeem himself by showing up late. Burkeeva hadn’t told any of her friends that she was meeting up with him, just in case they weren’t a match.

But she need not have worried. The date, at a hotel in Jerusalem overlooking the city — ”everything I loved, as if he knew,” Burkeeva said — went well. They spent more than three hours together, “but I didn’t even notice how the time passed,” she said.

By the second date, an evening walk in Wohl Rose Garden, Poluden was ready to propose. He brought flowers to the third date, at an outdoor fountain; on the fourth, on April 31, he popped the question. It had only been two weeks of dating, but after the journey they had been through, the couple knew they were ready to start life together. 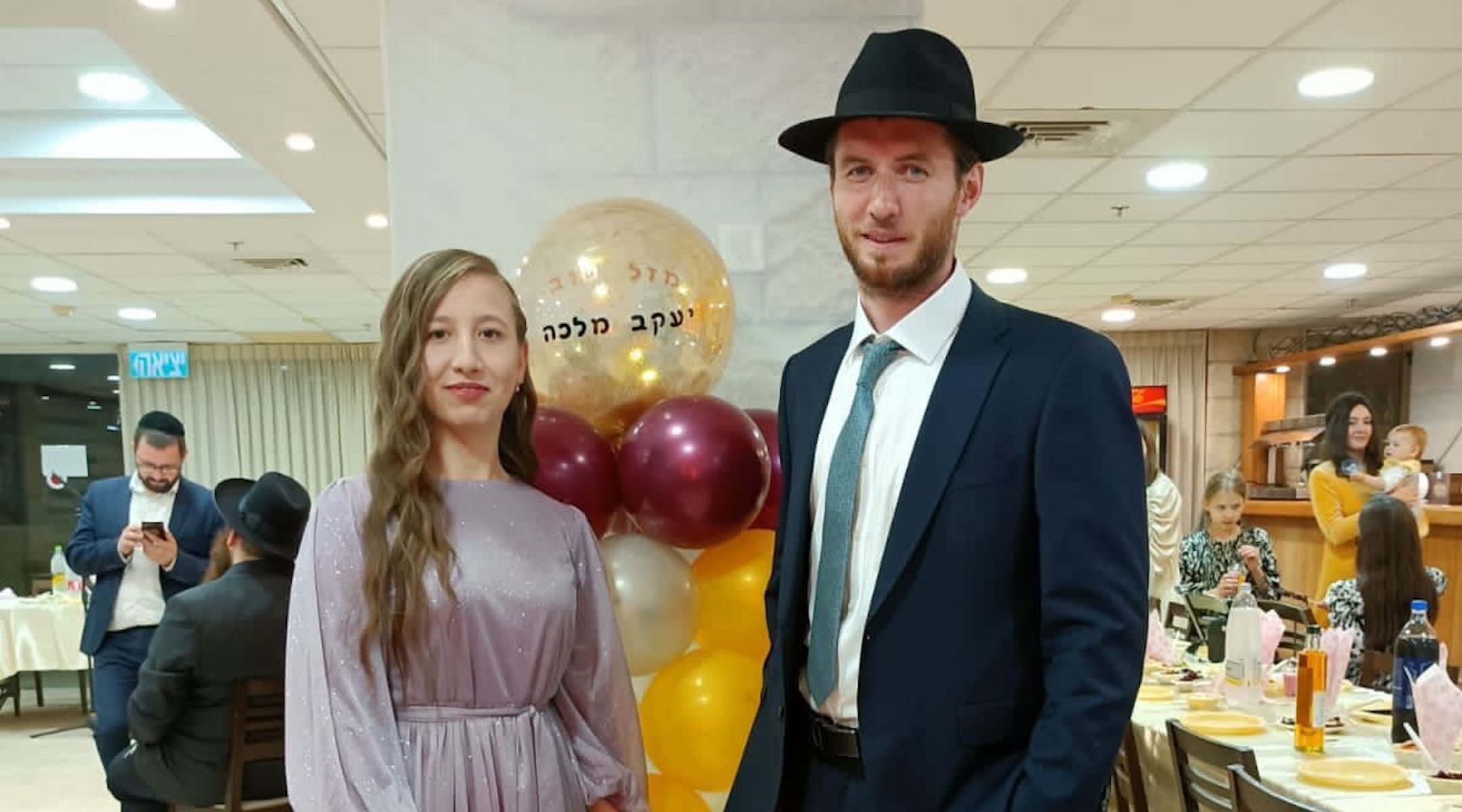 Burkeeva and Poluden at their engagement party in Israel. (Courtesy)

Meanwhile, in Manhattan, “We were looking for a reputable address for tzedekah,” said Chitzik-Goldschmidt. “Because we know Eastern Europe very well and we know how these things can go sometimes, unfortunately. We know the Kozlovs personally, we knew we could trust them and we knew that every dollar we sent would be going to the right place.”

After coordinating with the Kozlovs, the Goldschmidts announced their first fundraiser for Ukraine to the Altneu in March, only a few weeks after they had officially announced the name of the brand-new congregation.

Within the span of three months, the congregation raised just over $35,000. “We are proud that our very first crowd-sourced fundraiser was not for our own shul, but rather for our brothers and sisters in crisis,” the Goldschmidts wrote in an email to the congregation. “We felt it was important to do a communal fundraiser, too, allowing all to take part in this mitzvah.”

Of the total amount, $15,000 will go toward helping to pay for the wedding in Tiberias. Burkeeva said more than 200 people are planning to attend. The rest of the money, according to Rabbi Kozlov, was applied to the costs of getting the yeshiva’s students and, in some cases, also their families out of Ukraine — expenses for tickets, medicine, doctors, assembling the right documents and flights to Israel, as well as supporting parents whose kids made it to Israel or Belarus with the Kozlovs, but who are or were still stuck in the war-torn country themselves.

Kozlova said she and her husband are planning to remain in Belarus for the time being. “I feel the support,” Kozlova said. “It was a miracle that we even stayed alive on the whole trip from Ukraine to Belarus, because it was a very dangerous trip. But what scares me most is the feeling of loneliness. We never felt lonely. There was always support.”

As for Burkeeva and Poluden, after their wedding, they will remain in Israel, where they plan to learn to speak Hebrew; Poluden will continue his studies at a yeshiva and Burkeeva will work. Eventually, however, they hope to return to Ukraine. “I always comfort myself with the fact that everything that happens, happens for the better,” Burkeeva said.

—
The post With the help of a NYC synagogue, two young Ukrainian Jewish refugees will soon marry in Israel appeared first on Jewish Telegraphic Agency.