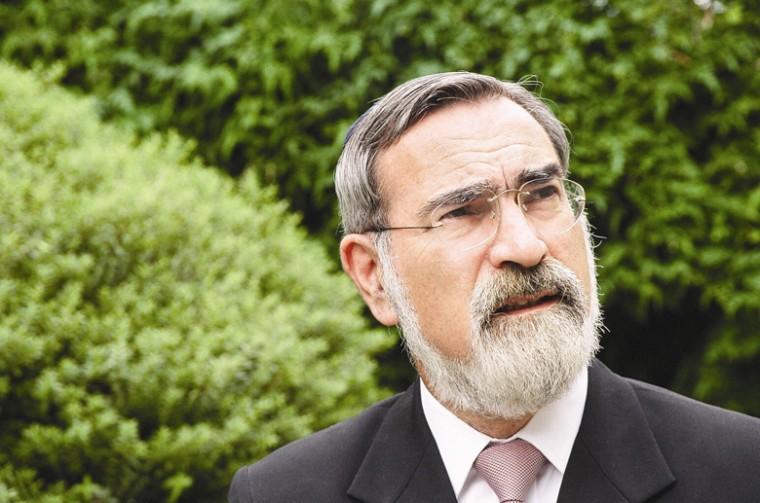 The search to replace Britain’s powerful longtime chief rabbi has gone international, but even as resumes are gathered and interviews conducted, some are questioning whether the position is still relevant and what it means today for the Anglo Jewish community.

As chief rabbi, Lord Jonathan Sacks brought international attention to the post as an eloquent writer and speaker on modern Jewish and social issues, gaining recognition as an ambassador for the whole of the Jewish community. Sacks’ writings on strengthening education, creating social mechanisms to counter crime and violence, and instilling moral values in society are often taken into the public policy sphere for discussion.

“With Jonathan Sacks you have somebody who has the gravitas and respect of the wider population of this country as a leading spiritual figure,” said Alexander Goldberg, a Jewish chaplain and interfaith expert.

But Sacks’ tenure as head of the centrist Orthodox United Hebrew Congregations of the Commonwealth coincided with an era of sweeping decline in Jewish affiliation, particularly among the mainstream Orthodox he leads.

In the 21 years since he became chief rabbi, Modern Orthodox Jewry dropped from two-thirds of Britain’s affiliated Jews to just over half.

In a time of deepening polarization among the Jewish denominations, Sacks has been criticized for alienating progressive and secular Jews, particularly over Jewish status issues such as conversion and marriage. He is seen as leaning right, toward the haredi Orthodox community, while the Reform, Liberal and Masorti (Conservative) movements don’t recognize his authority and each has its own senior rabbi.

“The current chief rabbi of the United Synagogue is a very wise counsel who has done an enormous amount for interfaith relations and is a really valuable addition to the British Jewish community,” said Ben Rich, the Reform movement’s chief executive. “He’s very good at interfaith, but not very good at intrafaith.”

With the fragmentation of Britain’s Jews, there is debate over what the office of chief rabbi means today: who should it represent, what should its focus be and, for some, whether the institution has become bigger than the position it represents.

“I argue that the chief rabbinate has all but passed its sell-by date,” said Meir Persoff, the longtime former Judaism editor at the London-based Jewish Chronicle and author of “Another Way, Another Time.”

“The chief rabbinate has caused more controversy than peace,” Persoff said in an interview. “For the sake of peace, the non-Orthodox movements have let him have his say as spokesman for Anglo Jewry. But they argue with him over conversion, marriage and divorce to such an extent that the chief rabbinate is bound to create more problems than drawing the community together.”

Modeled after the archbishop of Canterbury, the chief rabbinate was created in Victorian times to give the monarchy a single address for British Jewry. He is selected by the United Synagogue, the governing body of the Orthodox synagogues, which decides on the method and chooses the committee that will make the appointment.

At the time the post was created, 85 percent of British Jews were Orthodox. But modern-day Judaism, much like the Anglican Church, is losing ground as a uniform community.

Centrist, or Modern, Orthodoxy lost 20,000 of its 66,000 members, countered by a doubling of the haredi community and sharp growth in the tiny Conservative community, which went from 1,226 members to 2,269 in the same period.

Within the Modern Orthodox fold, there is discussion over how to breathe new life into the movement and whether the new chief rabbi should focus internally on strengthening the United Synagogue. That would be a departure from Sacks, whose external focus made him one of the most recognized religious figures in Britain.

A key question is whether the chief rabbi can — or should — continue to try to unite British Jewry under a single umbrella.

Goldberg, the American Jewish Joint Distribution Committee’s international interfaith and community relations adviser, believes the chief rabbi should be a bridge not just to other denominations but also to the unaffiliated, who “need to become conversant with the Jewish world if they are going to continue with the Jewish community.”

Goldberg said the Orthodox rabbinate’s rigidity on issues of conversion and same-sex marriage is alienating many young Jews by forcing them to choose between their partners, who are not viewed as legitimate under Orthodoxy, and their affiliation.

“I think the main issue the community wants to discuss is [Jewish] recognition, so people can marry each other,” said Goldberg, who also is chaplain at the University of Surrey. If the new chief rabbi “turns inward, particularly to the Orthodox community … you are not going to have that discussion at all.”

Whoever takes the post will face a challenge, particularly with the growth and influence of the haredim, who support the chief rabbi as an external voice for Orthodoxy, though only in a limited capacity.

“He’s broadly representing the view of the community and he’s representing it to the outside world,” said Avrohom Pinter, a haredi leader and principal of the haredi Yesodai Hatorah schools. “It’s very valuable that the Orthodox Jewish perspective is heard in the halls of government when ruling on issues of shechitah [kosher slaughter] or circumcision.”

Other affiliated movements stress the need for a plurality of voices and argue that striving for a united Jewish front is counterproductive.

Masorti and Reform leaders say they now have their own rabbis in the public arena to express their specific values.

“I don’t believe that the Jewish community represented only by an Orthodox rabbi would get these points across,” said Rich, whose Reform movement appointed its first official movement rabbi in January, a position it sees as equal to chief rabbi. “So may a thousand voices bloom.”

The Conservative movement’s director, Matt Plen, said the face of Judaism is changing.

“There’s almost a renegotiation going on among certain parts of Anglo Jewry with the idea of what it means to be Jewish,” Plen said. “Younger people, especially … are more willing to take Judaism on their own terms and figure out for themselves what sort of Judaism they want to have in their lives.”

Geoffrey Alderman, a Jewish Chronicle commentator, belongs to the rival centrist Orthodox Federation of Synagogues, which does not follow the chief rabbi. He says the chief rabbinate has become “silly and expensive” because no one person can represent Anglo Jewry any longer.

“There is no such thing as Anglo Jewry,” Alderman said. “There are Anglo Jewries, with an ‘s.’ The Anglican Jewish community has polarized and pluralized.”

Orthodox leaders point out that Sacks is resigning but not retiring, and thus he will maintain his charismatic presence as a Jewish leader in the House of Lords and on the public stage.

“This gives us the luxury of being able to look for somebody who can devote a bit more time to matters within the [Modern Orthodox] congregations,” said Stephen Pack, president of the United Synagogue, which is conducting the search and hopes to find a replacement well before Sacks leaves office in September 2013.

“Do we have an appetite just to maintain the status quo and push it along for, say, another 20 years, or do we recognize that demographics change and there are different forces and pressures, that there is scope to do things differently?” Pack asked.

“I think that when we are looking at candidates, we will be looking at people who will have come up with a vision on how they’d like to do the job which is refreshing and new.”