With resolution against hiring women rabbis, RCA votes for confrontation 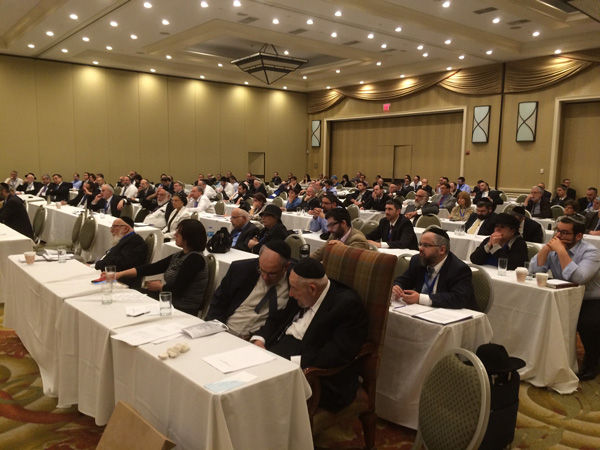 Rabba Sara Hurwitz, right, is the dean of Yeshivat Maharat in New York, which since its founding in 2009 has ordained 11 Orthodox clergywomen. (Uriel Heilman)

NEW YORK (JTA) – When America’s main modern Orthodox rabbinical association voted last week to ban the hiring of clergywomen by its members, the question wasn’t whether to endorse women rabbis.

It was whether to widen the group’s well-established repudiation of female clergy or keep quiet and focus on finding common ground with modern Orthodox Judaism’s progressive wing.

While the Rabbinical Council of America’s membership ultimately voted for the confrontational approach, the margin of victory was narrow, and the group’s president made a point of saying he voted against the motion.

The RCA first addressed the issue of Orthodox clergywomen in 2010, coming out unanimously in opposition. The group reaffirmed that stance in 2013.

In addition to noting the closeness of the vote, RCA leaders pointed out that the resolution was proposed by members, not by the RCA’s resolution committee. In keeping with RCA policy, they declined to provide the exact vote tally, but said that about half the association’s 1,000 members participated.

“The vote count on the women’s resolution was very close,” the professional head of the RCA, Executive Vice President Rabbi Mark Dratch, told JTA. “Many of the people who voted against the resolution weren’t voting against it on the merits, but felt this wasn’t the right way to handle the issue, that it needed to be handled in a more nuanced, proactive and educational manner.”

The RCA’s president, Rabbi Shalom Baum, issued a similar statement in a news release, noting that he, as well as “the vast majority of current officers and rashei yeshiva [yeshiva leaders] with whom he consulted,” felt the resolution was unnecessary and ill-timed.

RCA leaders are doing a delicate dance between their own opposition to Orthodox clergywomen and the growing agitation within some segments of modern Orthodoxy to allow women access to greater leadership opportunities and ritual roles, such as leading prayer services. On the grassroots level, there is a widening fissure between modern Orthodox Jews who support pushing the envelope on women’s issues and those who want to hew more closely to tradition.

The envelope-pushing camp, sometimes called Open Orthodoxy, is led by Rabbi Avi Weiss of Riverdale, New York. He founded a progressive modern Orthodox rabbinical school for men in 1999, Yeshivat Chovevei Torah, as an alternative to Yeshiva University’s rabbinical school; established America’s first and only seminary for ordaining Orthodox clergywomen in 2009, Yeshivat Maharat, and ordained the first American Orthodox Jewish clergywoman, Sara Hurwitz, upon whom he conferred the title “rabba,” a feminized version of “rabbi.”

Hurwitz is now dean of Yeshivat Maharat and a clergywoman at Weiss’ synagogue, the Hebrew Institute of Riverdale. Like male clergy, she delivers sermons, officiates at weddings, brises and funerals, and provides pastoral counseling. Hurwitz has said she wants to see women lead Orthodox synagogues on their own. Her synagogue recently hired its second clergywoman, Rabba Anat Sharbat, a 2015 graduate of Yeshivat Maharat.

In the traditionalist camp are the RCA and Yeshiva University. In 2014, Yeshiva University’s rabbinical school, the Rabbi Isaac Elchanan Theological Seminary, threatened to withhold rabbinic ordination from a student who hosted a so-called partnership minyan: a traditional prayer service with gender-separate seating, but in which women may read from the Torah and lead certain prayers.

In August, an influential rosh yeshiva, or rabbinic leader, at Yeshiva University, Rabbi Mordechai Willig, caused a stir by penning a d’var Torah, or homily, suggesting it may have been a mistake to allow Orthodox women to study Talmud given the subsequent campaigns for expanding the religious roles of Orthodox women.

“The inclusion of Talmud in curricula for all women in Modern Orthodox schools needs to be reevaluated,” Willig wrote in his essay, “Trampled Laws.” “While the gedolim [Torah greats] of the twentieth century saw Torah study to be a way to keep women close to our mesorah [tradition], an egalitarian attitude has colored some women’s study of Talmud and led them to embrace and advocate egalitarian ideas and practices which are unacceptable to those very gedolim.”

For its part, the RCA has long refused to open up membership to clergywomen – or even male rabbis whose sole ordination is from Weiss’ seminary. Weiss, who was ordained by Yeshiva University, announced earlier this year that he had quit the RCA over these policies. The rabbinic association Weiss co-founded some years ago as an alternative to the RCA, the International Rabbinic Fellowship, admits clergy from both his male and female seminaries. 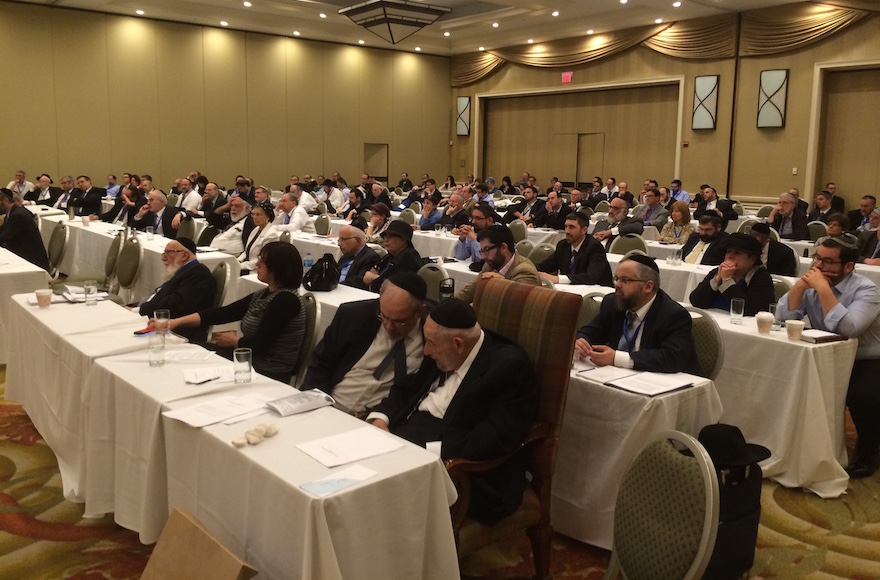 The haredi Orthodox Agudath Israel of America has taken an even harsher line against the purveyors of Open Orthodoxy, seeking to cast them outside the pale of Orthodoxy. On Monday, Agudah leaders decided to issue a fresh condemnation.

“‘Open Orthodoxy’ and its leaders and affiliated entities (including, but not limited to, Yeshivat Chovevei Torah, Yeshivat Maharat, and International Rabbinic Fellowship), have shown countless times that they reject the basic tenets of our faith, particularly the authority of the Torah and its Sages,” the Agudah’s Council of Sages declared in a statement. “We therefore inform the public that in our considered opinion, ‘Open Orthodoxy’ is not a form of Torah Judaism (Orthodoxy), and that any rabbinic ordination (which they call ‘semicha’) granted by any of its affiliated entities to their graduates does not confer upon them any rabbinic authority. May the Almighty have mercy on the remnants of His people and repair all breaches in the walls of the Torah.”

By contrast, RCA leaders in recent months have sought to steer clear of doing direct battle with Weiss and the proponents of Open Orthodoxy. The RCA says it supports expanded leadership roles for women within the bounds of Jewish law, or what is “halakhically and communally appropriate.” That means no to women rabbis or clergy, yes to female yoatzot halachah — Jewish legal advisers who may serve as authorities on such women’s issues as laws of sexual purity — and female lawyers in religious courts.

“The RCA stands for a lot of positive things about the modern Orthodox community; unfortunately, we don’t get those out enough,” said Baum, who assumed the RCA presidency this summer. “While I don’t support women as rabbis, I don’t for a second question their motivation, sincerity or commitment to the Jewish community.”

Baum said RCA leaders tried to derail last week’s resolution but were outnumbered by member rabbis determined to draw a line in the sand. Those backing the resolution – according to RCA rules, they were not publicly identified – were motivated by a number of developments over the past year, according to Dratch, including the growing acceptance of Maharat graduates as clergy, the ordination of Orthodox clergywomen by Har’el Beit Midrash in Israel and the activities of Rabbi Shlomo Riskin, the chief rabbi of Efrat in the West Bank.

Riskin has established a Women’s Institute for Halakhic Leadership at the Midreshet Lindenbaum college for women in Jerusalem that offers women the same training offered to male clergy, and in January he hired an American-Israeli woman in Efrat, Jennie Rosenfeld, to be the first woman to jointly lead an Orthodox community in Israel.

It remains to be seen whether last week’s RCA resolution empowers the organization to take punitive action against rabbis who violate the ban. Dratch said the RCA’s executive committee is in the process of determining whether the resolution constitutes a new rule or is merely a statement. The RCA has no authority over Orthodox institutions.

One thing is clear: The resolution is likely to exacerbate the growing divide within Orthodoxy over women’s roles, mobilizing opposition rather than quelling controversy and unifying the movement.

On Sunday, a Chicago-area doctor, Noam Stadlan, launched an online petition called “We Support Women in Orthodox Leadership Roles” that as of Monday morning had garnered more than 400 signatories. Also on Sunday, Hurwitz distributed a fact sheet about Yeshivat Maharat that underscored the seminary’s growing cadre of female Orthodox clergy.

Hurwitz told JTA she didn’t think the RCA resolution would have any impact on Yeshivat Maharat’s clergywomen.