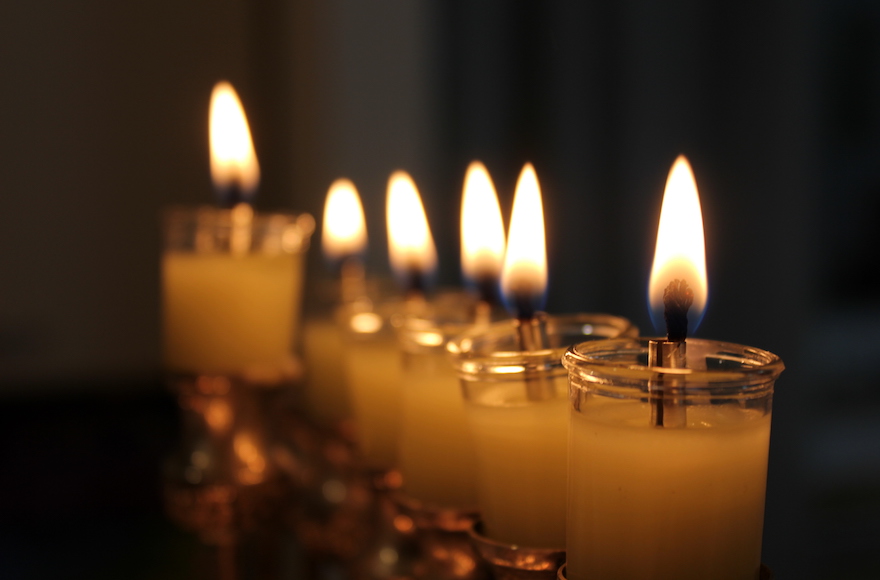 KIRYAT ONO, Israel (JTA) — Last year, at the diverse campuses of Ono Academic College, some of my students expressed concern and even dismay over the Christmas tree we had set up next to the Hanukkah menorah. The students were understandably wary of what such Christian symbols have meant to Jews throughout history. The concept of embracing and accepting the other does not, after all, erase a long and painful history of Jewish persecution.

This multicultural holiday setup led to an important conversation about how we see each other.

The lighting of the Hanukkah menorah can mean different things to different people. Some Jews focus more on the military victory that highlights Jewish strength and vitality, while others emphasize God’s miracles in reclaiming the Temple in Jerusalem.

Whichever aspect of Hanukkah one focuses on, the directive still revolves around “pirsum ha’nes,” publicizing the miracle. But what exactly does that mean?

Maimonides also discusses pirsum ha’nes in the Mishna Torah, and ends the discussion by presenting us with a hypothetical question: When Hanukkah coincides with Shabbat, and there is only enough oil to light either Shabbat or Hanukkah candles, which candles should take precedence?

When two mitzvot are in conflict with each other, we commonly favor the mitzvah that we engage in more regularly. This predicament is called “tadir v’sheino tadir, tadir kodem,” which roughly translated as “[when presented with] that which is frequent and that which is not frequent, the frequent takes precedence.” In this regard, the halachah, or Jewish law, says lighting Shabbat candles takes precedence over lighting Hanukkah candles.

However, Maimonides does not give this typical halachic response to the question, even though it would be the most obvious one to give. Instead, he explains as follows:

The lamp for one’s home [i.e., Shabbat] receives priority, since it generates peace within the home … Peace is great, for the entire Torah was given to bring about peace within the world, as [Proverbs 3:17] states: “Its ways are pleasant ways and all its paths are peace.”

The act of lighting candles represents a larger Jewish value of bringing peace and harmony into the family home (“shalom bayit”) and sanctifying God’s name (Kiddush Hashem). Lighting Shabbat candles, a private mitzvah, is rooted heavily in domestic peace and is performed to impact one’s own family, to fill the home with the joy and light of Shabbat.

In contrast, the public mitzvah of lighting Hanukkah candles is an expression of Kiddush Hashem. We are directed to place our candles in our windows and at our doorsteps in order to publicize the miracle of the holiday (or the victory of the Maccabees) by radiating our spiritual light outward.

Maimonides urges us to realize that the value of peace in the home is primary. We must first have peace in our own domains and personal relationships before we can hope to bring a meaningful light and true peace to the world at large. Therefore, Shabbat candles take precedence because the act of solidifying peace within the household sets the stage for what we want to convey about ourselves to the outside world.

It’s no secret that the house of the Jewish nation is not yet in order. Among ourselves, we struggle to find a way to accept and include each other, despite our differences, and to figure out how to create room in our home for everyone. To make things even more complicated, we share our home here in Israel with other peoples from various religious and cultural backgrounds, and we struggle mightily to relate to the other. But as we contemplate what pirsum ha’nes means during Hanukkah, there are answers within our own tradition that we can look to and choose to live by.

Rabbinic commentaries agree that we are not allowed to show off the light to the outside world as a way to flaunt a supposed achievement of being a “light unto the nations,” an example for others to follow. Instead, we must treat the light as a reminder of the work that must still be done within ourselves, our own homes and beyond, and to not get caught up in the pitfalls of triumphalism.

Our Hanukkah and Christmas displays served as a crucial reminder that various traditions, and the people who practice them, can occupy the same space without one negating the other. Lighting Hanukkah candles next to a Christmas tree is an invitation for dialogue about who we are as individuals and how we relate to each other. It allows us to stand side by side with the other, with both of us present and proud of who we are. It reminds us that this is the work we have to do here at home in Israel and everywhere else we go.

But now that we are the ones in power here in Israel, and we are back in our own home, we must ask ourselves what we can do today for the sake of shalom bayit. After all, it’s not just our home – we are sharing it with others, too.

During the upcoming Festival of Lights, it’s important that we consider what exactly we’re radiating out into the world. When our home is fragmented by conflict, derision and marginalization, we are not really observing the laws of Hanukkah. We are neither putting our best foot forward, nor are we contributing more light to the world. Like everything else of value, a lasting, fulfilling peace begins at home.

(Tova Hartman is the dean of humanities at Ono Academic College, a model of multicultural graduate and undergraduate programming and education-based social reform, as well as the fastest growing institute of higher education in Israel.)