Why does a man need to star in a play about legendary politician Bella Abzug? 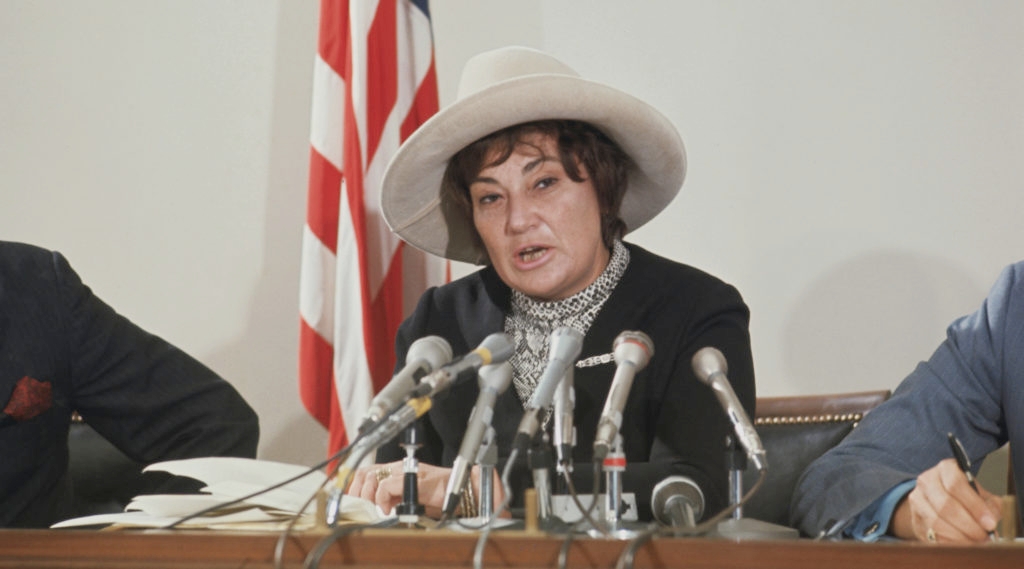 This piece originally appeared on Alma.

“Bella Bella,” a play about the legendary Jewish politician Bella Abzug, is currently playing Off-Broadway. The solo show takes place on the eve of the 1976 Democratic senatorial primary, as Abzug tells tales of her life as a lawyer and congresswoman in the early days of women’s liberation. While some of the text comes from Abzug’s letters and speeches, the play was written by Harvey Fierstein — who also plays the title role.

When I first saw that the celebrated Broadway writer and actor would be embarking on a solo play about Abzug, I assumed he would be playing her in drag. Fierstein is known for changing the game for drag performers in mainstream, commercial theatre. He adapted the films “La Cage Aux Folles” and “Kinky Boots” into stage musicals, both of which feature men embracing their drag personas. He won Tony Awards for both writing and performing in “Torch Song Trilogy,” which chronicles the offstage life of a drag performer. If you’re not a theater person, you may still recognize Fierstein as the original Edna, Tracy’s overprotective mother in the Broadway hit “Hairspray.” (He also played a terrific Tevye a few “Fiddler on the Roof” revivals ago.)

But Fierstein opted not to don a dress for Abzug; he briefly wears one of her famous hats, but is dressed otherwise neutrally, with all-black clothes and bare feet. In a New York Times profile of the show, Fierstein defended the team’s choice to divorce gender from the physical role, saying, “I am not putting on makeup, I am not putting on a wig, I’m not even a woman pretending to be Bella. What I have to say you can trust because I am not a person here in disguise.”

This would be a more compelling argument if Abzug herself hadn’t been known — along with her trailblazing politics — for large hats and fur coats, for funky dresses, thick jewelry, and a clenched, shaking fist. A man adopting the over-the-top femininity of Abzug — a woman with few contemporaries in labor law, progressive activism, and Congress — could enter the somewhat contentious territory of misogynist mocking. A woman seeing herself in and dressing as Abzug to play the role could instead be a different story, one that recognizes the struggle many working women face: the expectation to dress well and beautify ourselves so that men are less threatened by our professional ambitions.

This tension speaks to the main difference between drag as an art form and cornerstone of LGBTQ+ culture and the abuses of drag that simply mock women. There is a long tradition in theatre of casting men as women who are older, stricter, meaner, fatter, louder — in other words, deviant. Men have played the shrill Mrs. Jennings in various stage adaptations of Jane Austen’s “Sense and Sensibility”; the musical adaptation of “Matilda” featured men as the domineering and mole-specked Mrs. Trunchbull; men have played Lady Bracknell, arbiter of Victorian values, in “The Importance of Being Earnest” from community theaters to Broadway.

Even without the overt drag, I was apprehensive that “Bella Bella” would contribute to this pattern. (And with Fierstein’s tongue-in-cheek declaration to the Times that “I don’t play a woman, I am a woman,” combined with his Abzug espousing that “Men are not women, women are not men,” I still worry that the play wanders into transphobic territory.)

Early in the show, when Fierstein’s Abzug mentions that she will be the only woman in the Senate if elected, he brawls, “Is that too much to ask? One woman?” What’s meant as a wink-wink, nudge-nudge reference to the obvious presence of a man onstage feels more like a jab in the gut: Fierstein auditioned multiple actresses for the role before claiming it as his own, allegedly frustrated with busy big-name stars. It would be impossible to mount a show about Abzug’s life and work without discussing the quotidian effects of systemic sexism, and indeed, as Abzug hides from friends and family in a hotel bathroom on election night, she monologues about the many injustices she faced as a working woman postwar. The show’s marketing emphasizes that Abzug disrupted the “boys’ club” of politics and lays claim to her famous slogan, “This woman’s place is in the house — the House of Representatives!”

Why, then, was it too much to ask for Fierstein and his producers to find one woman to play the feminist icon?

There is one woman at the helm of this production: director Kimberly Senior. I hate to say that Senior feels irrelevant — as a theater artist, I know it’s not possible to truly tell who or what has derailed a production — but this play is Fierstein’s vehicle through and through. He rambles on with old stories of Abzug’s life that could be from his own; he frequently responds to audience laughter with raised eyebrows in recognition of praise; he spouts off Yiddishisms as if he weren’t playing a character at all. I don’t mean that Fierstein has so immersed himself in the character that I really believed he was Abzug; rather, he seems oblivious to the specifics of his protagonist, as though he were just reveling in the attentions of older theater goers who have shelled out $100 minimum to see him. I suppose everyone’s entitled to the pursuit of a cash cow, but by claiming Abzug as his own, Fierstein is perpetuating the very boys’ club his heroine fought to dismantle.

And when aspects of Abzug’s life don’t fit the show’s agenda, they’re tossed out. Fierstein recalls how Abzug left her Orthodox synagogue because it did not allow her the same opportunities as male congregants, but neglects to mention that she later enrolled in a Conservative theological seminary. Her Judaism is instead boiled down to endless grandmotherly phrases, even when it’s clear that her pursuit of justice was married to her religion and culture. Tongue-in-cheek jokes comparing Presidents Truman and Trump ring out as desperate. The play also pares down the Israeli-Palestinian conflict into a few one-liners about universal humanity that let the audience pat themselves on the back instead of grappling with larger issues. It’s clear that “Bella Bella” was not made for the inheritors of Abzug’s legacy, the women and girls who carry on her hard-fought battles, but instead for the pseudo-progressives of our grandparents’ generation.

The play does offer a few important insights into buried stories of 20th-century politics, even if they are doled out like a high school history class. It rightfully mentions that FDR. delayed U.S. intervention in the Holocaust long after he learned of its atrocities. It also details Abzug’s time defending Willie McGee, a black man accused of assaulting a white woman in 1945 Mississippi who was sentenced to death after an initial jury deliberation of two and a half minutes. It’s crucial for white people — especially the upper classes that often make up theater audiences — to learn about our country’s history of lynchings and wrongful executions, and while the explicit details of McGee’s execution are stomach churning, they are as necessary for someone like me as descriptions of the gas chambers are to a non-Jew.

The fact that the women most impacted by Abzug’s fiery feminism are excluded from her theatrical narrative is no coincidence: In the 2018-19 Broadway season, male directors and writers outnumbered their women colleagues 8 to 1. Theater of today remains in large part the same boy’s club of Abzug’s age, and this is not for a lack of women theater artists. (If you’re wondering how to diversify your artistic team on the basis of gender, this company literally keeps a list of women and gender nonconforming theater-makers.)

If we’re going to continue to change the world according to Abzug’s vision, we have to demand more authentic stories. This means including women’s voices at every level of theater, especially in artistic programming and producing. As the line between passive and active feminism continues to blur in our everyday lives, we need to remember that the mere presence of a woman director does not make a piece of media feminist. If we truly want to honor Bella Abzug’s spirit, we need to fight for the intersectional inclusion of women onstage and off, not just for the ones who can afford to see a celebrity-headlining show.