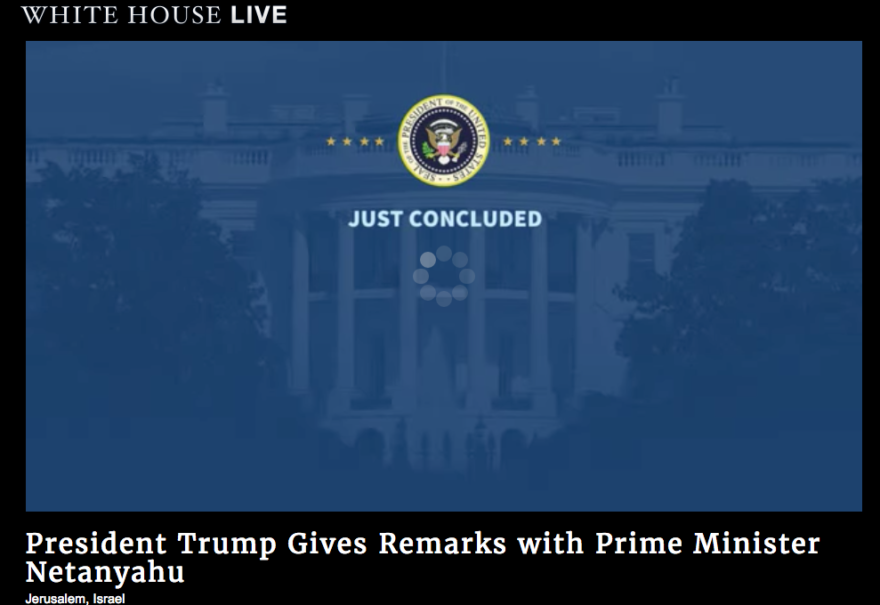 The White House captures a live feed as being broadcast from “Jerusalem, Israel” on May 22, 2017. (Screenshot)

WASHINGTON (JTA) — The White House captioned a live video feed of President Donald Trump and Israeli Prime Minister Benjamin Netanyahu speaking together as being broadcast from “Jerusalem, Israel,” a departure from the policies of past presidents.

The caption during Monday’s news conference at the prime minister’s residence came as Trump administration officials continue to differ over whether to describe the city as being part of Israel.

The Obama administration at least twice – in 2011 and then again last year – corrected photo captions and datelines that had read “Jerusalem, Israel” to “Jerusalem,” reflecting longstanding executive branch policy that the city should not be described as being in any country until there is a final status agreement. (Congress recognized the city as Israel’s capital in 1995.)

The George W. Bush administration also routinely captioned photos and listed the city on schedules and in news releases as simply “Jerusalem.”

Trump campaigned on a pledge of moving the U.S. Embassy to Jerusalem, Israel’s capital, but has since retreated.

His administration has delivered mixed messages on the topic. His ambassador to Israel, David Friedman, has said he would prefer to be based in Jeruslem, and his ambassador to the United Nations, Nikki Haley, has said she regards the city as being in Israel. His secretary of state, Rex Tillerson, and his national security adviser, H.R. McMaster, have both refused to say the city is in Israel when asked by reporters ahead of and during this week’s presidential Middle East tour.

Trump earlier Monday also appeared to split the difference: He visited the Western Wall in the Old City – in the city’s eastern sector, captured by Israel in 1967 – accompanied by Israeli government officials, including the rabbi of the wall. However, he would not agree to allow Netanyahu to accompany him.