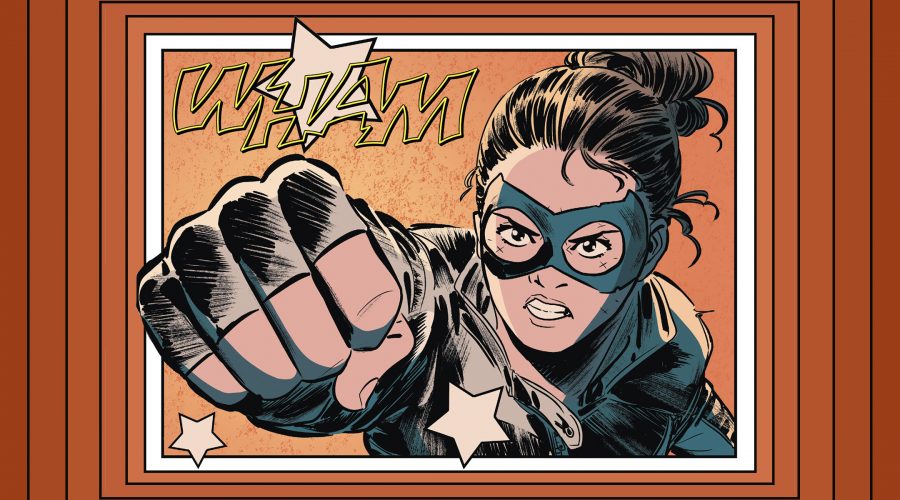 (JTA) — It turns out that Batman’s hometown of Gotham City has a historically Jewish neighborhood, complete with a synagogue. And for this year’s High Holidays, at least one masked superhero will be worshipping there.

Her name is Whistle, a.k.a. Willow Zimmerman, and she’s a Jewish superhero — DC Comics’ first to be explicitly created as Jewish in 44 years. She’s an activist-turned-masked-crusader who draws inspiration from Jewish teachings; she develops the ability to talk to dogs; and she’s making her debut this month in “Whistle: A New Gotham City Superhero,” a graphic novel geared to young adults.

“There’s a long and fascinating history of Jewish creators in comics,” the book’s author and character creator, E. Lockhart, told the Jewish Telegraphic Agency. “Superman, Batman and Spider-Man were all invented by Jewish men, and scholars have interpreted them through a variety of lenses that take that into account. But while there have certainly been Jewish superheroes before, Whistle is the first Jewish hero to originate as Jewish from DC Comics since 1977.”

Lockhart was referring to Seraph, a superhero from Israel who helped Superman in “Super Friends #7″ before immediately falling out of the public eye.

Yet the roots of superheroes are distinctly Jewish.

Joe Shuster and Jerry Siegel, the sons of Jewish immigrants, effectively kicked off the lucrative genre in 1938 with the debut of Superman in “Action Comics #1.” Superman was a new kind of hero, a noble, all-powerful defender of American ideals who harbored a secret identity and origin story that made him distinctly an outsider. If his origins weren’t specifically Jewish, they were certainly informed by the Jewish experience.

Superman became an unexpected bestseller and, consequently, the blueprint for a whole genre, as the market soon flooded with new superheroes. The vast majority of these comic book pioneers — writers, illustrators and publishers — were Jewish, including Stan Lee and Jack Kirby. However, their characters were a generic form of “all American” without any religious or ethnic affiliation. So while Captain America was allowed to punch Hitler on the cover of the hero’s debut, it took decades for superheroes to have a Jewish identity.

There have been exceptions over the decades, most notably Marvel’s “X-Men” villain Magneto, retconned as a Holocaust survivor following his debut, and popular DC antihero Harley Quinn, a Brooklynite who sprinkles in Yiddish phrases and was voiced in her original 1990s animated TV debut by the Jewish comedienne Arleen Sorkin. (Harley’s current film incarnation, played by Margot Robbie, drops the Jewish signifiers.)

But what makes Whistle unique is that her origin story is centered around her Jewish identity. Willow Zimmerman is a social justice activist who volunteers at a local pet shelter and lives with her single mother, an adjunct Jewish studies professor, in Down River, a Gotham City neighborhood modeled after the Lower East Side. That means it comes with a long Jewish history, making Judaism canonical in Gotham more than eight decades after Bob Kane and Bill Finger, two Bronx Jews, created the Dark Knight.

The setting was informed by Lockhart’s own upbringing. Growing up, she often visited the real Lower East Side with her father, the playwright Len Jenkis, who wrote for “The Incredible Hulk” TV show in the 1970s.

“I always had a strong sense of my paternal family’s heritage and the history of New York City as intertwined,” she said. “I had done research on the Jewish history of the LES for another book, so when DC invited me to create a new Gotham City hero, it felt natural to use some of that research and my own love of the neighborhood to create a new part of Gotham that’s a lot like the LES of the 1980s.” 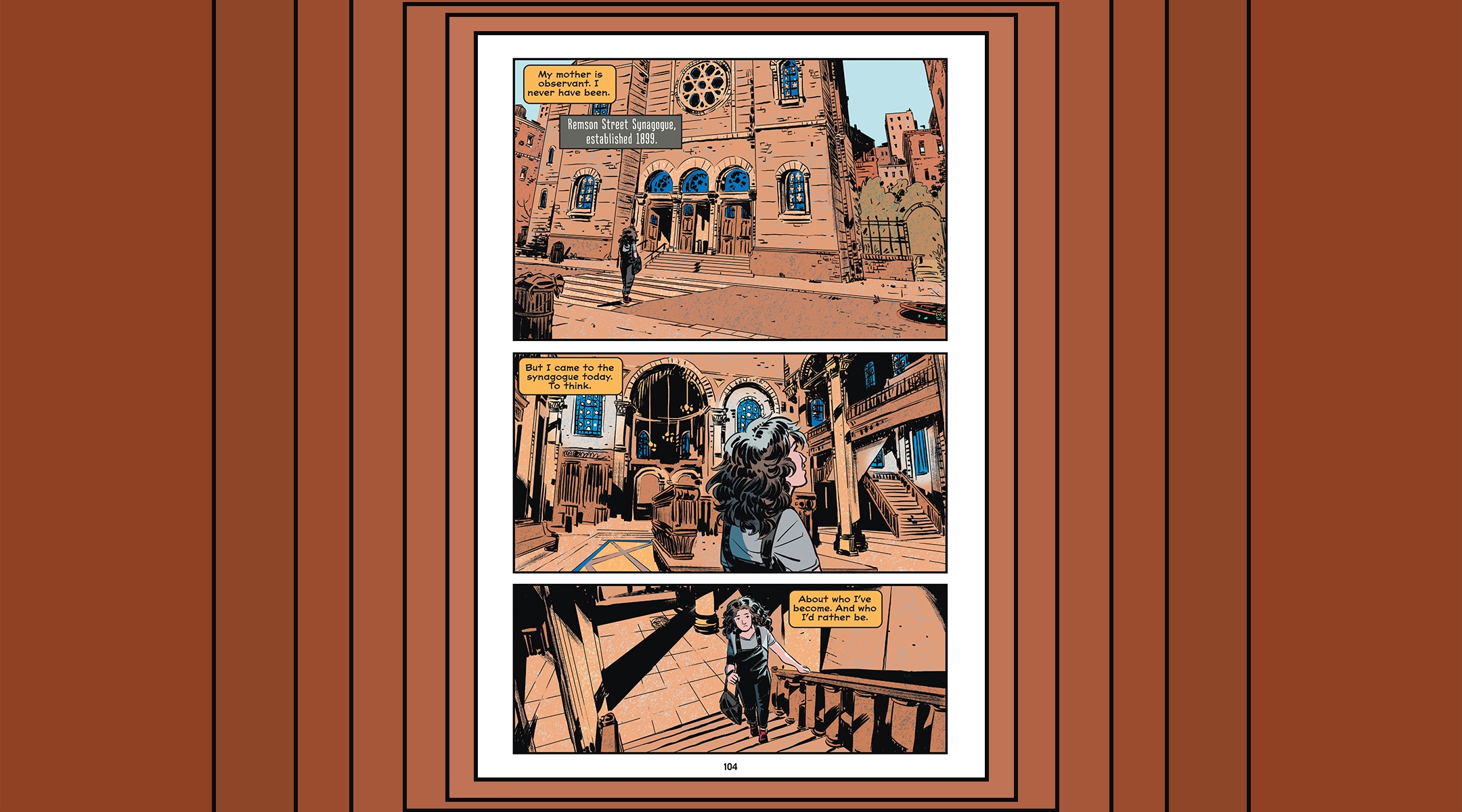 For Whistle herself, Lockhart drew inspiration from a different trailblazer at DC’s rival: Kamala Khan, the Muslim Ms. Marvel introduced in 2013.

“I love Ms. Marvel and was definitely inspired by the way [author] G. Willow Wilson engaged with questions of heroism and the superheroic body through the lens of Kamala’s Muslim identity,” Lockhart said. “I thought about it a lot while I was writing Whistle.”

“Whistle,” which is illustrated magnificently by Manuel Preitano, is Lockart’s debut as a graphic novelist.

“I write novels about young women who are navigating morally complicated situations,” she said. “Very often the stories are about agency and power and self-knowledge, one way or another.  So in that sense, ‘Whistle’ is right on brand for me.”

Those familiar with the Batman universe will recognize many side characters, such as the Riddler and Poison Ivy, in the narrative.

“It was great fun […] to play in the sandbox of DC Comics’ Gotham City, which has a wonderful rogues gallery of spectacularly deranged supervillains,” Lockhart said.

Another Batman supervillain, Killer Croc, plays a central role in Willow’s transformation into a superhero. Outside her local synagogue, she and her sidekick, a loyal stray Great Dane named Lebowitz (named after Fran, Lockhart confirms), collide with Killer Croc and wake up being able to understand each other.

“When she gets superpowers, she becomes Whistle — and no longer feels helpless,” Lockhart explains. “It’s a fantasy of empowerment, but her position is also morally complicated. I didn’t want to shy away from asking questions about what it means to be a hero, emotionally and ethically.”

Like Lockhart herself, Willow is secular. Her visit to Gotham’s synagogue is for meditation purposes.

“I knew I would tell the most truthful and nuanced story if I wrote from my own identity and from the community I’m in,” Lockhart said on her decision not to make the character strictly observant. “My heroine engages with her Jewishness in much the same way that I do.”

Rooted in Lockhart’s own past, Willow’s Judaism leans on old-neighborhood nostalgia and Yiddishisms like “bubbeleh. It’s a more traditionalist approach to a Jewish superhero identity than other recent efforts, such as Marvel’s relaunch of “White Tiger” in 2002 as a biracial Jew of color struggling with his Black and Jewish identities.

But Lockhart does touch upon many present-day topics animating Willow’s generation, such as gentrification, social justice and environmental issues. With Willow, a hero whose actions are clearly informed by her Jewish identity and the concept of tikkun olam, or repairing the world, Judaism will now be an integral part of Gotham’s mythology.