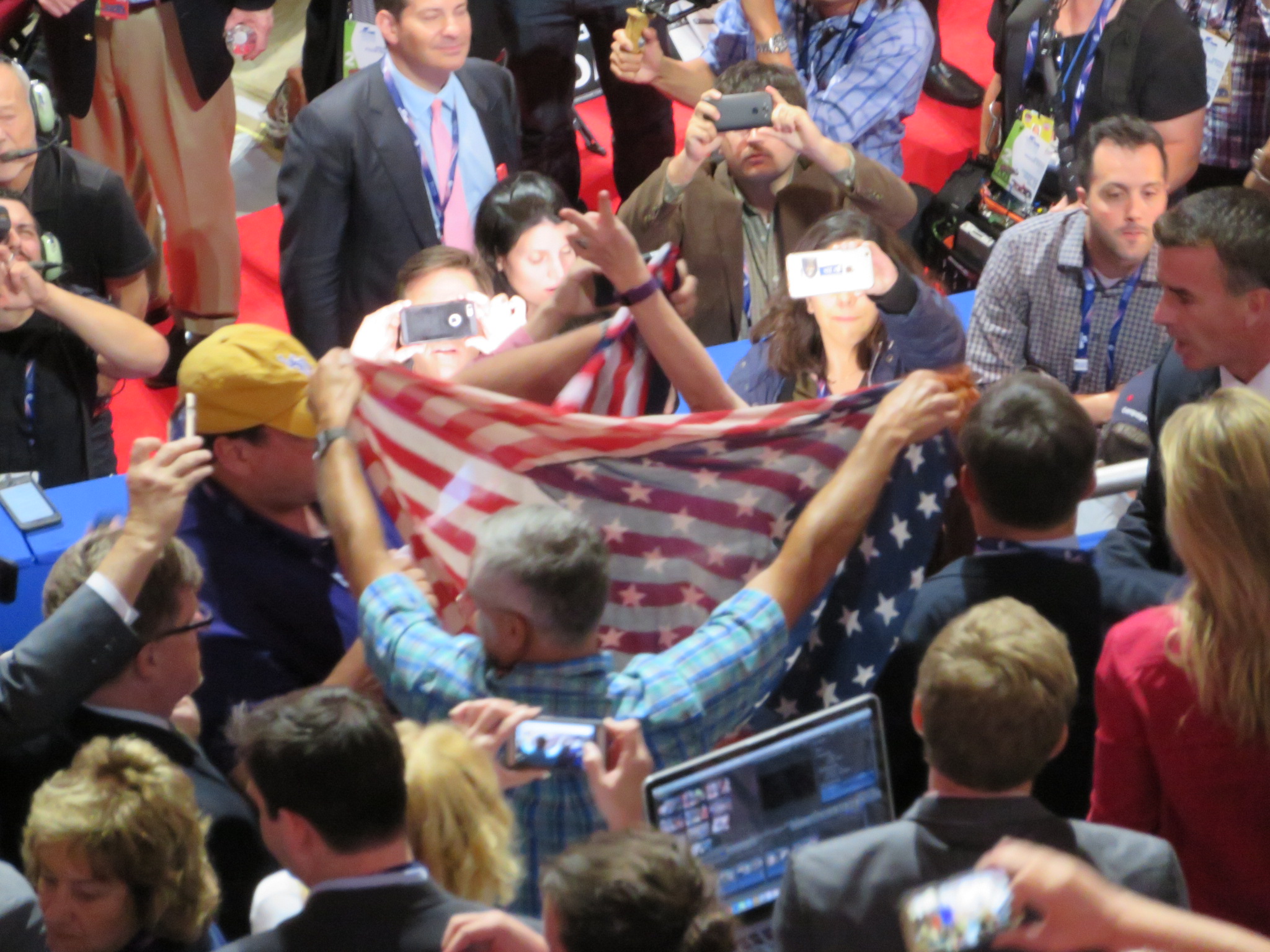 A Code Pink protester pokes a victory sign through a shroud of American flags created by angered delegates at the Republican National Convention in Cleveland on July 19 2016. (Ron Kampeas)

CLEVELAND (JTA) — Two days into the coronation of Donald J. Trump, the arrival of Saul Alinsky, in all his dead Jewish radical glory, was not a surprise.

Lucifer, on the other hand, was an unexpected guest, brought into the proceedings by Ben Carson, the rival Trump defeated.

Alinsky is the community organizer and author whose templates have loomed large in the conservative mind in recent years as the ur-text of leftist nefariousness.

Among other techniques, he advocated using non-violent conflict as a rallying principle, and the identification of an external threat as a means of uniting an afflicted community.

Those disruptive tactics and Alinsky’s associations with Hillary Clinton and Barack Obama have made him a bogeyman for the right wing. Clinton wrote her undergraduate thesis on Alinsky, and interviewed him – she was critical of some of his tactics, but her association still incurs conservative wrath.

Newt Gingrich embraced the Alinsky-Obama nexus during his abortive 2012 run for president, thrice mentioning Alinsky in his South Carolina primary victory speech. The Forward’s Gal Beckerman wondered at the time if Gingrich was sending out a high-pitched whistle.

“I might be overreacting, it’s possible, but if I hear what I hear when he uses that obviously Jewish, foreign-sounding name, I’m sure others do as well,” Beckerman wrote.

No surprise, Alinsky had a walk-on Tuesday night, hours after Donald Trump formally assumed the nomination through a roll call vote on the floor of the Quicken Loans Arena in Cleveland on the second night of the convention.

Carson is now ensconced in the Trump camp – it came down to hating Ted Cruz even more than he did Donald – and was the penultimate speaker.

Carson was charming and self-deprecating at first, wondering, in his neurosurgeonish way what had happened to the brain of Democrats, who, he argued, were losing their minds to political correctness.

Then came Hillary Clinton, and this:

“One of her heroes, her mentors was Saul Alinsky. Her senior thesis was on Saul Alinsky. He wrote a book called ‘Rules for Radicals.’ On the dedication page it acknowledges Lucifer, the original radical,” Carson said.

“This is a nation where every bill in our wallet says ‘In God we trust,’” Carson continued, and the audience joined in with him on the last four words, and also when he got to “under God,” reciting the pledge of allegiance.

“Are we willing to elect as president someone who has as their role model somebody who acknowledges Lucifer?” he asked.

Here’s Alinsky’s dedication (or, to be precise, an epigraph that precedes his book, along with a quote from Rabbi Hillel): “Lest we forget at least an over the shoulder acknowledgment to the very first radical: from all our legends, mythology and history (and who is to know where mythology leaves off and history begins — or which is which), the very first radical known to man who rebelled against the establishment and did it so effectively that he at least won his own kingdom — Lucifer.”

Alinsky, a Jew, is not embracing Christian phenomenology, nor is he lauding its antithesis. He is asking why a society needs a Lucifer, and suggesting that the invention of the devil is a product of repressing tendencies that might at times prove productive.

It’s Freudian, and, in its identification of a pariah as a possible savior, Jewish. But anti-Christian? No. Alinsky believed in religion as a useful structure for effecting social change.

Why Alinsky comes up every four years among conservatives – and especially this Satanic iteration – raises interesting questions.

Why would Carson, who has stumbled on Jewish issues in the past (confusing Hamas with hummus, suggesting the Holocaust was a result of gun control, among others), once again tread these perilous Jewish waters? There’s a morbid history attached to identifying Jews as anti-Christian, one that is not particularly useful in the service of a nominee, Trump, whose interactions with anti-Semites have disrupted his campaign.

Also, the wonderment Beckerman articulated still stands: What exactly is it about Alinsky that drives the right wing nuts? Alinsky’s recipe for coming together – identifying a common enemy as a rallying force — should come as no surprise to a party and a nominee borne to triumphs in recent years through a robust rejection of all things Obama.

The Alinsky stalking the room Tuesday was not embodied in Hillary Clinton, but in how speakers used her in a way that would have done the Jewish radical proud. New Jersey Gov. Chris Christie, emerging gamely from pique triggered by Trump’s selection of Indiana Gov. Mike Pence as his running mate, “prosecuted” Clinton for her alleged sins. He whipped the crowd into cries of “Guilty!” for shaping the Iran deal, opening up Cuba (which did not happen on her watch as secretary of state), screwing up the Russia reset, abandoning Syria, hiding her emails and, he said, coming to the defense of Boko Haram. (Yes, I know, but Christie didn’t explain.)

Christie’s Alinsky-like venture worked only too well. Every mention of Clinton and her sins unleashed a rumble of low, insistent, knowing laughter throughout the arena, as if the thought of her and her impending electoral doom was a punchline to an inside joke. “Guilty!” was not enough for the crowd; several times, they wrested away the narrative from Christie, chanting “Lock her up!” and he gently reeled them in, urging patience.

An hour or so after Christie finished, Carson was speaking, and the crowd was still antsy. Some folks leapt up and applauded at the name of God, others stalked the rows of chairs, appearing to be in search of Hillary-like Pokemon icons ready for the snatching.

Just as Carson was wrapping up, a Code Pink activist unfurled a pink banner inscribed with the word “racism” – I couldn’t make out much else, because a man and a woman were ready with flags, draping them over her.

Carson retreated and the evening’s final speaker, Kimberlin Brown, a soap opera star, avocado grower and a “California Businesswomen for Trump” who had been billed by the organizers as an “average” Trump voter, stepped forward. The tussling on the floor did not abate.

“Many of you know me as your favorite soap opera actress,” Brown said, as the Code Pink activist tugged at her banner, locked in a delegate’s death grip. A crowd gathered around the mayhem, some leaning forward, shouting “U.S.A!”

Brown listed her credits, making a pun on “One Life to Live” rendered inaudible by the chanting, which was increasing in volume. Soon she was touting the robust health of her youthful avocado growers as a repudiation of Obamacare and the struggle on the floor intensified. The flags fluttered, the banner twisted into knots, the chanting intensified.

One could envision Saul Alinsky, atop a cloud drifting over Cleveland’s dark summer sky, nudging Lucifer’s shoulder, pointing down and smiling.