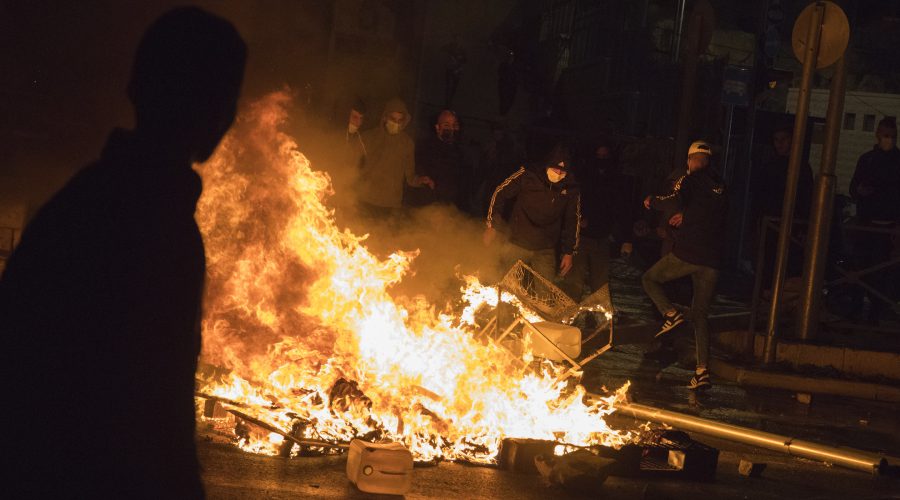 (JTA) — The videos circulating out of Jerusalem — of beatings, stone throwing and racist chants — are shocking. Reporters say it’s some of the worst fighting the contested city has seen in years.

But the tensions that fueled the violence in the Old City on Thursday night are anything but new.

Hundreds of Jewish extremists marched down Jerusalem streets chanting “Death to Arabs” and singing “Burn their village.” The demonstration followed days of unrest in eastern Jerusalem in which Palestinian residents clashed with police over restrictions imposed during the Muslim holy month of Ramadan. In recent weeks, Palestinians have posted videos to TikTok showing them harassing visibly Orthodox Jews on the street, seemingly unprovoked.

Videos shared on social media showed Jews attacking an Arab home in Jerusalem as children cried, as well as scuffling with police. Another video showed Palestinians beating a Jewish man, who was taken to the hospital. The Israeli media reported that more than 100 people in all were injured in the melee.

Here’s what you need to know about the unrest now taking place.

Thursday’s violence was unusually bad, even for Jerusalem.

Jerusalem is no stranger to interethnic tensions, but the footage that emerged was among the worst in recent memory, according to reporters on the scene.

It followed more than a week in which Palestinian residents of eastern Jerusalem protested barriers that had been erected around the Damascus Gate preventing crowds of Palestinians from partaking in an annual Ramadan tradition — sitting at the steps of the gate at night.

The TikTok videos have also made the rounds on social media this week showing Palestinians knocking the hats off the heads of haredi Orthodox Jews, hitting them or throwing stones at them. In response, bands of Jewish extremists have roamed the streets of Jerusalem looking for Palestinians to assault.

It all came to a head on Thursday night when a crowd of hundreds of far-right Jews marched together on the Old City. They were organized by Lehava, an extremist group that seeks to prevent intermarriage or coexistence between Jews and Arabs. Its leader is Bentzi Gopstein, a disciple of the late Rabbi Meir Kahane, a Jewish extremist who opposed the presence of Arabs in Israel.

As the Lehava march neared the Old City, hundreds of Palestinian counterprotesters gathered chanting “With spirit and blood we’ll redeem you, O Aqsa!,” according to The Times of Israel. Police attempted to separate the two crowds, who shouted insults at each other.

But violent protest is far from rare in the Old City.

Thursday’s unrest, if shocking, was anything but unique in Jerusalem, and particularly in its Old City. Home to Jewish and Muslim holy sites, and at the center of one of the most bitterly contested cities on Earth, the Old City has seen conflict of one kind or another throughout history.

In recent years, the fighting has centered on the Temple Mount, the holiest site in Judaism, which is revered by Muslims as the Noble Sanctuary. In an arrangement more than a half-century old, the site is under Israeli control but governed in practice by a Jordanian-affiliated Muslim body. Jews may visit during limited hours and their rights are otherwise restricted there.

A group of Jewish activists has pushed for expanded rights at the site. Palestinians have protested, sometimes violently, in response. This has sparked no shortage of clashes, from bombings, attacks and shootings, to protests, to diplomatic tensions between Israel and Jordan. In 2015, anger over restrictions at the Temple Mount set off a wave of Palestinian attacks across Jerusalem.

Jewish Israelis and Palestinians have also been fighting over the future of the Old City as a whole, which Israel captured from Jordan in the 1967 Six-Day War. Israel claims the Old City as part of its undivided capital, while the Palestinians see it as the heart of their own capital  in a future state. Most of the international community views the eastern part of Jerusalem, including the Old City, as illegally occupied by Israel.

On Jerusalem Day nearly every year, right-wing Jews march through the Old City, some chanting “Death to Arabs,” the slogan heard on Thursday.

For years, right-wing Jewish families have been buying property in the Old City’s Muslim Quarter, as well as in the adjacent neighborhood of Silwan, saying that they are seeking to live in an area rich with Jewish historical and religious significance. The Palestinians complain that Israeli courts have used unjust means to evict Palestinian families that have lived in the area for generations, transforming an Arab neighborhood into a Jewish one.

The uncertainty seems bound to continue.

While this week’s violence did not flare up again on Friday, renewed unrest would not be surprising. Palestinians often clash with Israeli police during Ramadan, which ends on May 12.

Israel’s political quagmire could also feed the unrest. The future leadership of the country remains in limbo as Prime Minister Benjamin Netanyahu has so far failed to assemble a new governing coalition following last month’s election. Meanwhile, for the first time in years, another follower of Kahane, Itamar Ben-Gvir, holds a seat in Israel’s parliament, the Knesset. It’s also unclear whether Palestinian elections, scheduled for next month, will actually take place.