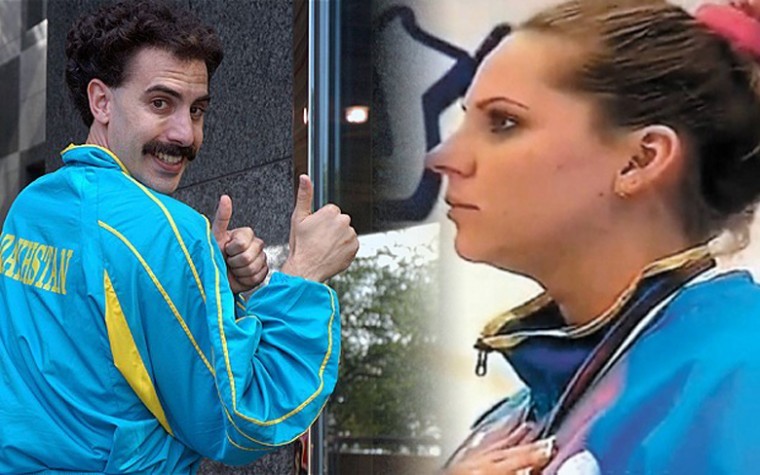 Kazakh shooter Maria Dmitrenko had to listen to a spoof of the national anthem of Kazakhstan from the movie "Borat" as she received a gold medal at the Arab Shooting Championship in Kuwait, March 22, 2012.

NEW YORK — It’s been quite a week for KISS frontman Gene Simmons.

On Tuesday, the band joined with members of Motley Crue for a news conference to promote their tour this summer. Simmons was asked about pop stars overshadowing rock stars and let loose with this seemingly unprompted rant against Rihanna:

“We’re sick and tired of girls getting up there with dancers and karaoke tapes in back of them,” Simmons said. “No fake bulls—. Leave that to the Rihanna, Shmianna and anyone who ends their name with an ‘a.’ ”

Motley Crue’s Tommy Lee backed up Simmons, telling Billboard, “No disrespect to Rihanna, she’s a great singer, but we’re in a slump for some s— that has some personality and appeal beyond a bunch of pop stuff that’s floating around out there. I’m glad he said that actually because I don’t think i can bear watching another f***ing award show that is just a little bit better than ‘American Idol.’ It’s f***ing pathetic to watch people go out and f***ing karaoke with a bunch of lights and video. It’s all completely watered down.”

If that weren’t enough, Simmons also picked a fight with the Rock and Roll Hall of Fame. In an interview with Rolling Stone, he took aim at the hall’s incoming class — a group that includes Guns N’ Roses, Red Hot Chili Peppers and the Beastie Boys — because he’s not in it.

“It’s become a joke,” he said. “We’ll just buy it and fire everybody.”

Simmons has never been one to keep his mouth shut. Last year he bashed President Obama on CNBC for his 1967 Israel borders speech, saying that Obama “has no f****g idea what he is doing.” Then he called Madonna an “inappropriate choice” to do the Super Bowl halftime show.

It’s been five years since Sacha Baron Cohen’s film “Borat: Cultural Learnings of America Make Benefit Glorious Nation of Kazakhstan” ravaged Kazakhstan’s reputation (well, almost), and since then the former Soviet republic has been trying to prove to the world that it’s more than anti-Semites proud of their home-grown prostitutes.

For most of us it’s water under the bridge. But an incident at last week’s Arab Shooting Championship in Kuwait injected new life into an old saw.

Maria Dmitrenko won a gold medalist at the championship, and at the medal ceremony she expected to hear the Kazakh national anthem. Instead, organizers played the spoof rendition from Baron Cohen’s film, which include the lyrics “Kazakhstan’s prostitutes cleanest in the region, except of course Turkmenistan’s.”

Apparently the organizer in charge of the anthem downloaded the wrong version from YouTube, despite the Kazakh delegation’s offer to provide the real anthem. The Kazakhstan national sports agency has filed a complaint to the Asian Olympic Committee.

Max Weinberg of the E Street Band fame was scheduled to stop by the National Museum of American Jewish History on Tuesday night prior to Bruce Springsteen’s gigs the next two nights at the Wells Fargo Center in Philadelphia. The “Mighty Max,” as the Boss calls his longtime drummer, will be talking not only about his many years performing with the iconic band but his early days growing up in New Jersey, playing his first bar mitzvah at age 7 and attending synagogue at Temple Sharey Tefilo in East Orange.

In an email interview with JTA, Weinberg said he is “certainly pleased if people respond to my musical offerings” and that his drumming “was my way of living a life of tikkun olam.”

Talking about Temple Sharey Tefilo, Weinberg said, “I was greatly influenced by the poetic approach to leadership by the late Rabbi Avraham Soltes, who made the stories and scripture come alive through music and his charismatic teachings.”

Things on the new Springsteen tour pushing the “Wrecking Ball” album are going “wonderfully well,” Weinberg said. “The audience definitely enjoys Bruce’s new material, and seems to be both be stirred up and soothed by the message of the songs.”

He adds, “Touring with Bruce and the E Street Band is a dream come true.”

Weinberg acknowledges that life “has a big hole in it” since the deaths of longtime clarinetist Clarence Clemons last June as well as keyboardist Danny Federici in 2008.

Actress Mayim Bialik spoke Sunday at the National Museum of American Jewish History in Philadelphia, marking the 90th anniversary of the first bat mitzvah ceremony in the United States. Bialik, who noted that she was the first woman in her family to become a bat mitzvah, said the ceremony offers “the means by which we as women can begin to engage with the divine world,” the Philadelphia Inquirer reported.

“The bat mitzvah is the beginning,” TV’s “Big Bang Theory” actress said. “It’s not the end.”

The first bat mitzvah ceremony in the United States took place in 1922 when Rabbi Mordecai Kaplan called his daughter Judith to the Torah. The museum, in cooperation with Moving Traditions, has organized an exhibition, “Bat Mitzvah Comes of Age,” that will travel to communities throughout North America.

Israeli Madonna fans (especially the ones who couldn’t get tickets to her May 29th concert) will probably be thrilled to know the Material Girl is planning a second show at the Ramat Gan Stadium, two days after the first one, and calling it a “Concert for Peace.”

The Queen of Pop kicks off her MDNA tour in Israel (unless the Israelis attack Iran, as some Madonna fans are afraid), and for the second concert she invited representatives from peace organizations to the show.

“Music is so universal, and if there’s any chance that through my performance I can bring further attention and enlightenment to honor the peace efforts in the Middle East and help people come together, it would be an honor for me,” she wrote on her official website. “It is my way of thanking those who are making so much effort toward bringing peace to the Middle East.”

This will be Madonna’s second tour visit to Israel and her fourth concert.

Remember Esther Petrack, the Modern Orthodox contestant on “America’s Next Top Model”? Her ballsy appearance on the show’s Cycle 15 at age 18 included her lifting up her shirt, dressing provocatively and doing other non-kosher stuff. ANTM devoted an entire segment to Petrack’s Judaism, where she talked about how different she is from other contestants, especially when it comes to food habits (she keeps kosher).

Some people didn’t like the fact that the Jerusalem-born, Massachusetts teen told host Tyra Banks that she would (brace yourselves) break the Sabbath to appear on the show. Petrack’s mother, Marina, said the comment was the result of manipulative editing.

This week we learned that Petrack is now a private in the Israeli army’s Armored Corps and will become a tank instructor next week. Petrack told the Israeli paper Yediot Achronot that she enjoys the tank instructor course a great deal and that the girls are nicer than her peers on the show. The Israel Defense Forces released two photos of Petrack posing next to a tank.

Click to login and write a letter to the editor or sign up for the Daily Briefing.