We need dialogue, not demagoguery, when it comes to Israel 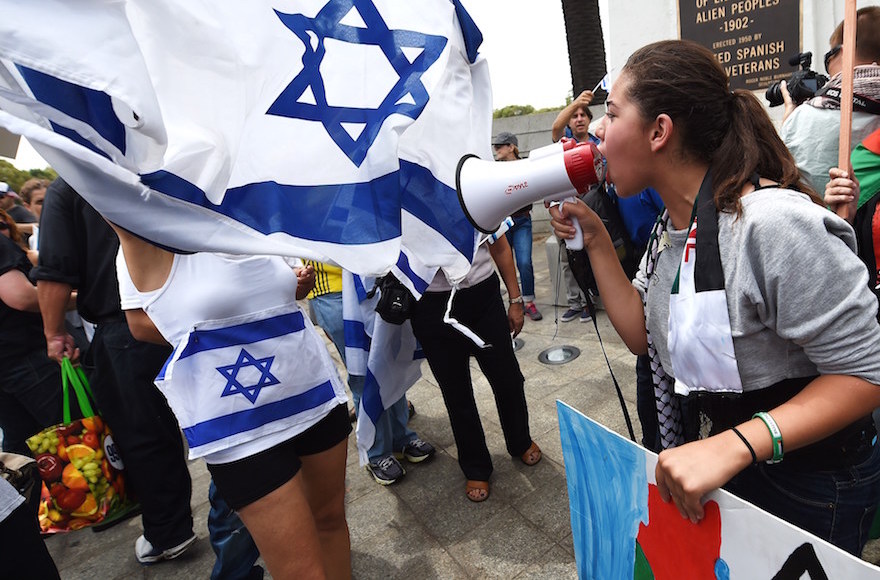 (JTA) — A Jewish educator who works on behalf of the Jewish people every single day recently received a letter that began with harsh words about her support for the anti-occupation group Breaking the Silence. Before long it took a startling turn.

“I regretfully must express my utmost hope,” the author wrote, “that you are hit by a car to put a stop to the injury you will cause the children that I love.”

This was not an anonymous comment hiding in the murky depths of a blog post somewhere. It was a signed letter fervently praying for the violent demise of a leader in the community.

In another recent case, a letter to the board of directors of a synagogue described its rabbi as “rabidly anti-Israel” and “pro-terror” before rising to the heights of eloquence by calling him a “KAPO (sic) piece of ****.” Again, this was a signed letter.

We live in an age of political polarization. We get our news from selected, homogeneous sources. Within our own little echo chambers, we hear only opinions that conform to what we already believe and reject those we do not. This is not a phenomenon of the right or the left. Voices on the left accuse those on the political right of being racists and warmongers who refuse to listen to principled concerns about the flaws in the peace processes of the past or those imagined for the future. But the vehemence of the attacks on these Jewish professionals is still startling.

It hardly needs to be said that critique of Breaking the Silence, or T’ruah, or Encounter, or J Street, or any other organization – whether on the left on Israel, as these organizations are, or on the right – is perfectly legitimate. Their policies, their curricula, their strategies, their communications are all fair game for open and critical discussion. Indeed, as educators, we encourage our students to have such critical discussions in our classrooms. But that is not what we are witnessing.

Instead, we see around us horrific demonization and the outrageous imputation of worst motives. We see guilt by association, often based on the most tenuous and speculative association. It doesn’t matter if you have been a card-carrying Zionist your entire life. It doesn’t matter if you have positively influenced hundreds or thousands of people to deepen their connection to the Jewish community and Jewish life, and indeed to the land and state of Israel. It doesn’t matter if you repeatedly and articulately defend Israel against the Boycott, Divestment and Sanctions movement or others who deny its legitimacy. No, if you are interested in understanding the complicated dynamics of the conflict with greater nuance, if you are talking to Palestinians, if you display compassion or concern for those who are suffering as a result of the occupation, you are fair game for the most vicious attacks.

When did listening and learning from others become so offensive to Jews? When did we lose the capacity to be “dan le-kaf zechut,” to trust in the virtuous intentions of people who demonstrate their commitment to the Jewish people every day?

We are not the only ones who are concerned. Gary Rosenblatt, editor of The Jewish Week of New York, expressed his unease recently about the same lamentable phenomenon.

“Publicly vilifying a rabbi, communal leader and lover of Israel … is unseemly, unethical and fosters Jewish enmity, not unity,” he wrote.

A few days later Yehuda Kurtzer, president of the Shalom Hartman Institute of North America, did so as well.

“Our community is doing violence precisely to those people who are stepping forward to serve us, at a time in which our institutions most need their passion and commitment,” Kurtzer wrote.

The issue is not only about how we treat those who are working on behalf of the community. There is also a fundamental educational issue at stake.

We are both educators who believe in and are committed to the growth and learning of our students, and since we are teachers of teachers, of their students as well. We know that such growth can only come when we open ourselves up to new experiences and new ideas. This never means simply accepting those ideas. On the contrary, the greatest growth happens when in confronting something new and challenging, we are able to articulate exactly why we disagree.

In “Experience and Nature,” the great 20th-century American philosopher John Dewey observed that “we cannot permanently divest ourselves of the intellectual habits we take on and wear when we assimilate the culture of our own time and place.” We are creatures of our environment. We have our basic assumptions about what is right and good and true, assumptions that are shaped by that environment. This is inevitable.

However, he continued, “intelligent furthering of culture demands that we take some of them off, that we inspect them critically to see what they are made of and what wearing them does to us.” In other words, we are not bound forever by our assumptions. We can examine them and critique them. We can reevaluate our positions. And we must do so, if we want to act responsibly in the world.

But there is no way to practice this kind of responsible reflection, to see “what wearing [our intellectual habits] does to us,” unless we create a culture that encourages the practice of empathy. There is no way to “further our culture” if we demonize and dehumanize not just our opponents but even the people within our own community who are trying to listen and learn.

Within some Arab and Palestinian circles, there is a debate about “normalization,” with one camp arguing that any conversation with a Jew or Israeli is contaminating and therefore prohibited. How ironic that some members of the Jewish community have arrived at a similar position – a position that erodes the values of empathy and respect, and undermines our capacity to learn.

Instead, we ought to be encouraging an openness to reflecting on divergent voices and views, especially on Israel and the conflict, whether from the right or the left. Israel is too important to the future of Jews and Judaism to leave in the hands of the demagogues and demonizers. We have to learn to talk together, and most importantly, to listen and hear one another.

Those leaders who are helping us to do that, whether in synagogues or college campuses or on Israel trips, deserve our respect.

(Jon A. Levisohn holds the Jack, Joseph and Morton Mandel Chair in Jewish educational thought at Brandeis University, where he directs the Jack, Joseph and Morton Mandel Center for Studies in Jewish Education. Miriam Heller Stern is the national director of the Hebrew Union College-Jewish Institute of Religion’s School of Education. They both hold doctorates from Stanford University and are alumni of the Wexner Graduate Fellowship Program.)