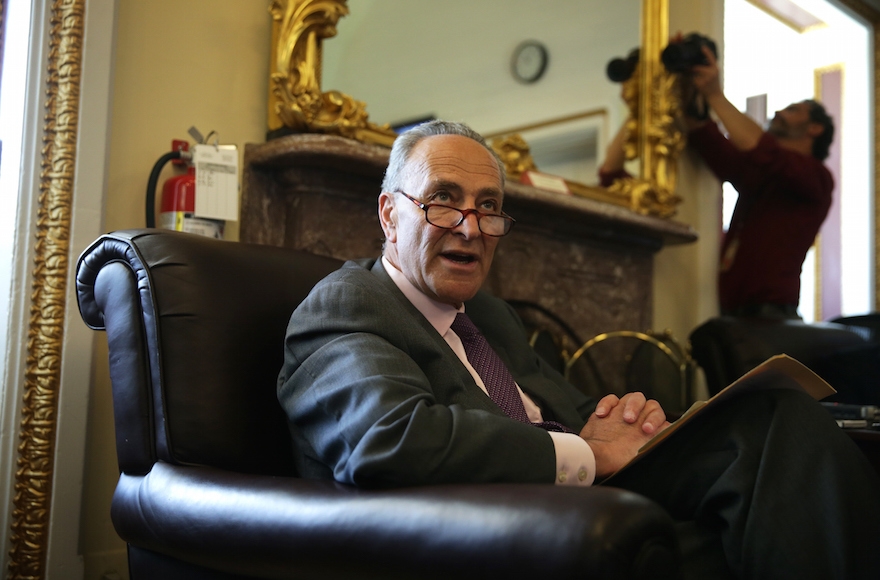 Sen. Charles Schumer is a powerful voice at the center of the Capitol Hill debate over the Iran talks. (Alex Wong/Getty Images)

Influential Sen. Charles Schumer (D-N.Y.) has being doing a delicate balancing act when it comes to the nuclear talks with Iran — giving President Barack Obama room to negotiate but also joining Republicans in pushing for a Congressional “backstop.”

With the talks now extended at least a week, a right-wing political advocacy group is trying to tip the balance. On Tuesday, the Emergency Committee for Israel released a 30-second video ad calling on New Yorkers to demand Schumer “stand firm” when it comes to the Iran deal — especially on the hotly contested issue of nuclear inspections.

Titled “Anytime, Anywhere,” the video will air this week on New York City cable news programs and appear on social media platforms in a “targeted, six-figure digital buy,” the group said in a press release sent out Tuesday. Board members of the groups are William Kristol, the editor of the Weekly Standard, and Gary Bauer, a former Republican presidential candidate. Conservative columnist Noah Pollak is the group’s executive director.

The video features clips of Schumer saying publicly, “You must have inspections unannounced, anywhere,” and “[Iran’s Supreme Leader Ayatolla Ali] Khamenei said on the military sites there will be no inspections, and we can do whatever we want. Unacceptable!” (In the first clip, the Jewish senator is wearing a kippah and standing in front of an “Agudath Israel of America” banner.)

Then the voice-over in the video intones, “But now Obama is caving to Iran. Call Senator Schumer, and tell him he must stand firm. Anywhere, anytime inspections, or no deal.”

Khamenei has indeed vowed that military sites would not be open to nuclear inspectors, and Secretary of State John Kerry has suggested Iran need not account for its nuclear past. But Obama has continued to insist that an rigorous inspections regime will be part of any deal.

The U.S.-led talks between world powers and Iran are aimed at suspending Iran’s nuclear program in exchange for the lifting of crippling international sanctions on its economy. Iran insists its program is peaceful, but many fear it wants a bomb.

Hawkish on Israel and heir apparent to retiring Senate Minority Leader Harry Reid (D-Nev.), Schumer is the most prominent of a handful of Democrats who have sought to limit Obama’s concessions to Iran. In April, he co-sponsored a bill, now law, that gives Congress 30 days to approve or reject sanctions in a deal with Iran.

At the same time, Schumer has been careful not to stray too far from his party or the president. He  has pushed back against more aggressive legislative moves — like imposing new sanctions — and reportedly maintains an open line of communication with the White House.

Perhaps given his precarious position, Schumer has been relatively tight-lipped about the substance of the Iran talks. But how hard he pushes, and in which direction, could have a major impact on the talks and their outcome — something the Emergency Committee for Israel well knows.