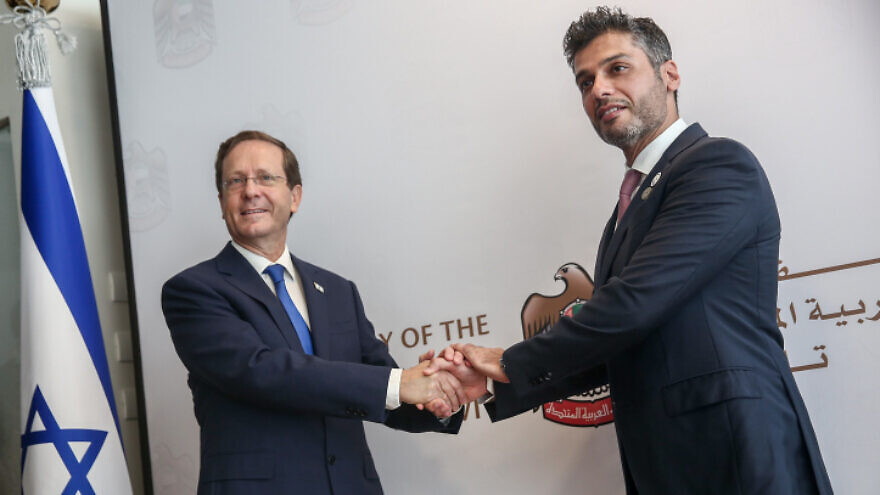 (Israel Hayom via JNS) The United Arab Emirates Embassy in Tel Aviv officially opened for business in Tel Aviv on Wednesday in a special ceremony presided over by Israeli President Isaac Herzog and UAE Ambassador to Israel Mohamed Al Khaja. Israeli and Emirati flags were raised outside the building.

The new embassy, located in the Tel Aviv Stock Exchange, is the first established in Israel by a Gulf state. Israel’s embassy in the UAE was inaugurated last month.

In his speech at Wednesday’s event, Al Khaja expressed hope that the inauguration would be a milestone for relations “between the peoples and the nations.”

Herzog thanked former Israeli Prime Minister Benjamin Netanyahu for his part in normalizing ties between Israel and the UAE, and said the peace between the two countries would benefit both peoples.

“Our peace agreement will save lives. Through shared initiatives on security and food and water, this agreement will lead to a more flexible, sustainable future. And through dialogue between people, both our cultures will be enriched,” said Herzog.

Moreover, the agreement was of wider, regional importance, said the Israeli president.

“The Abraham Accords will promote stability and security throughout our region, and serve as an example to everyone of the enormous promise and potential of peace,” he said.

The “historic peace” between the two countries must be expanded to other countries, he added.

“We are a peace-seeking people, and want a peace that will be responded to positively and with a strong handshake. In my recent phone calls with regional leaders, I again realized that we have many more partners and allies in this mission than we thought. Both Judaism and Islam teach that one of the names of God is ‘peace,’” said Herzog.