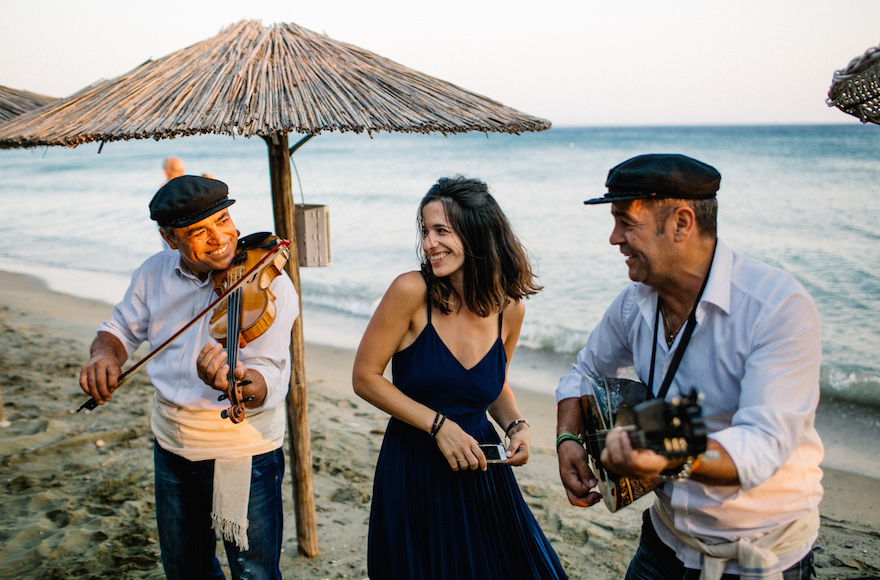 Wedaway founder and CEO Gal Zahavia sharing a moment with Greek musicians in Tinos, Greece, June 24, 2016. (We Are Red)

Destination weddings abroad are almost unheard of in this country.

Israeli weddings are all about family and community. And what better place to celebrate Jewish continuity than the Jewish homeland?

But this summer, a new Israeli company is challenging tradition by throwing wedding getaways on Greek islands. The one-woman startup, called Wedaway, is tapping a market of Israelis alienated by the haredi Orthodox Chief Rabbinate, which controls Jewish marriage in the country.

“A lot of people who can’t or don’t want to get married through the Rabbinate find Wedaway online,” company founder and CEO Gal Zahavi told JTA. “But what really attracts them is the idea of a small wedding like they see when they travel or on the internet. And Israelis love Greece.”

Zahavi came up with the idea for Wedaway from her own Greek wedding last June. She and her husband celebrated in a castle on the island of Evia. They wanted something more than the typical Israeli wedding, which often includes hundreds of guests gathered at a local event hall for a relatively standardized few hours of nuptials, dining and dancing.

Later they officially married through the Rabbinate, a decision she said they regret because so many Israelis are not afforded the same privilege.

Zahavi began planning other people’s weddings this year from her home office in the central Israeli city of Kadima. This summer she has held seven weddings, with five more scheduled before the end of October. An additional five already are on the books for next year, and she expects to hire more staff and possibly expand to Tuscany.

While there is no civil marriage for Jews or same-sex marriage in Israel, the state does accept such marriages performed abroad. Cyprus, the Czech Republic and the United States are the most popular destinations. While Israelis cannot marry in Greece, as Athens requires documents that Jerusalem will not provide, it doesn’t mean they can’t party there.

Zahavi can thank the Rabbinate for most of her clients. Of the 12 couples celebrating their unions with Wedaway this summer, seven opted to marry outside Israel at least in part to protest the Orthodox authority. Four are not recognized by the Rabbinate as Jewish or have other issues with Israel’s religion-based marriage system. Just one is getting married in Israel and celebrating in Greece.

“The Rabbinate is good for my business, but I would prefer that people could get married here,” Zahavi said. “I would have clients anyway because the experience of going to Greece is very unique. Word is spreading quickly.”

Neither the Rabbinate nor the Interior Ministry in Israel were immediately reachable for comment.

One downside — or upside, depending on how you look at it —  is that couples planning a Wedaway wedding have to drastically pare the invitation list. An average Israeli wedding includes several hundred guests — everyone from the couple’s parents to their favorite barista. Zahavi’s clients usually bring 40-50 people with them. Even at an average cost of $300-$500 per head, it can actually be cheaper than being married in Israel.

Still, cutting guests can be difficult. Family and community are central to Israeli culture, and a wedding is the ultimate symbol of that, explained Larissa Remennick, a sociology professor at Bar-Ilan University in Israel.

“Jews have always been very familial, focused on getting married and having children. The biblical mitzvah to be fruitful and multiply is still very influential in this country. You could says it’s our raison d’etre,” she told JTA. “What this company is doing is kind of a subversive act in a way.”

Wedaway isn’t the first company to help Israelis marry abroad; an industry has been around since the 1990s. In 2014, some 8,782 couples registered foreign marriages in Israel, compared to 50,797 who married in the country, according to the government’s Central Bureau of Statistics. But the businesses tend to focus on cutting international red tape, not wedding planning.

Wedaway isn’t the first company to help Israelis marry abroad; an industry has been around since the 1990s. In 2014, some 8,782 couples registered foreign marriages in Israel, compared to 50,797 who married in the country, according to the government’s Central Bureau of Statistics. But the businesses tend to focus on cutting international red tape, not wedding planning.

Wedding Tours is the biggest marriage abroad company in Israel. CEO Igal Lukianovsky said the company, founded in 2001, arranged 1,200 marriages in Cyprus and the Czech Republic in 2015. Of those, he said, the company helped with no more than a couple dozen wedding celebrations.

“Maybe 80 percent of couples make a party here in Israel with family and friends,” he told JTA. “They go to Cyprus just for the formal part, to sign documents.”

Wedaway, by contrast, is all about the celebration.

Tomer and Shir are having an egalitarian Jewish wedding with Wedaway next week. They could get married through the Rabbinate, but they come from a secular world where opting out is a given.

Tomer, 32, works for an education website. Shir, 29, is studying to be a physician. Together since 2011, they live in an apartment in central Tel Aviv. They asked that their last names not be used to protect their privacy.

“We’re secular, and the Rabbinate is very controlling toward everybody, especially women. It’s kind of forcing itself on all Jewish citizens in Israel, and we don’t want to play along,” Tomer said. “If I had tried to go to the Rabbinate, my father would have tried to stop me from doing it. In my family, it’s the obvious choice not to go.”

The couple have no plans to marry officially at all. Instead they are looking into domestic union cards, which formalize a couple’s status. In recent years, legislation and judicial rulings here have imbued domestic unions with most of the rights and responsibilities of marriage.

A growing number of Israelis are holding off on getting married, some indefinitely. The number of unmarried couples living together in Israel has risen 29 percent in recent years — to 88,000 in 2014 from 65,000 in 2012 — according to the Central Bureau of Statistics. Some attribute this trend to the Rabbinate as well.

In a statement this month about the rise in unmarried couples, Hiddush, an organization that promotes religious freedom in Israel, wrote: “Israel’s official, state empowered religious establishment arouses disgust among Jewish Israeli couples considering marriage. This is due to the needless tribulations many couples experience at the hands of the Rabbinate on their paths to marriage, and due to their fear of being required to conduct their divorces via the State rabbinical courts.”

Tomer and Shir are having their non-wedding wedding next week on Evia, the island with the castle, in an egalitarian Jewish ceremony. There will be a huppah, or wedding canopy, but no rabbi, and both of them will break glasses to conclude the ceremony.

One tradition Tomer hopes his guests will maintain is the Israeli practice of bringing checks as wedding gifts.

Why Tel Aviv is so crazy about dogs

The third Jewish Temple is coming to your Facebook feed