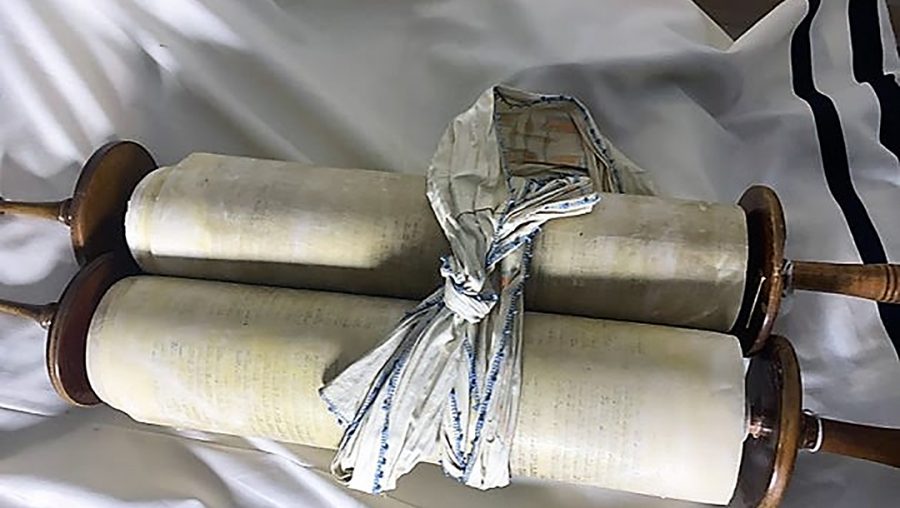 A Torah scroll that the Nazis stole from a Czech congregation on display at The Memorial Scrolls Trust in London. (Courtesy of the European Union for Progressive Judaism)

(JTA) — A Torah scroll that the Nazis stole from for their planned museum on Judaism in Prague will return to use there on Simchat Torah, a holiday that falls later this month and celebrates the seminal Jewish text.

Memorial Scrolls Trust, a London-based nonprofit that preserves Torah scrolls and other scripture, on Sunday said it will transfer scroll no. 1052, as it is catalogued there, to the use of Ec Chaim, a Progressive Jewish congregation in the Czech capital, ahead of the holiday that begins on Sept. 27.

In 1942, the Nazis seized the scroll, which was written in 1890 in Brno, a city situated about 100 miles southeast of Prague. They had the scroll shipped to the Central Jewish Museum, an institution that they wanted to use to showcase thousands of liturgical objects they had stolen from Jewish communities they pillaged. That museum has become the Jewish Museum of Prague, which is owned by the local Jewish community.

Separately, the Hungarian Jewish Museum and Archives and the National Library of Israel have bought from an auction house a collection of records from Jewish communities in Hungary.

The seven documents, ledgers, registers and other communal papers dated 1851-1948, had been put on the block by an auction house, the National Library said in a statement earlier this month. It did not name the auction house, which sold the documents to the buyers after protests by activists working to preserve Jewish heritage.

—
The post Torah scroll the Nazis stole for their post-Holocaust ‘Jewish museum’ returns to service in Prague appeared first on Jewish Telegraphic Agency.