To fight anti-Semitism, first you have to define it 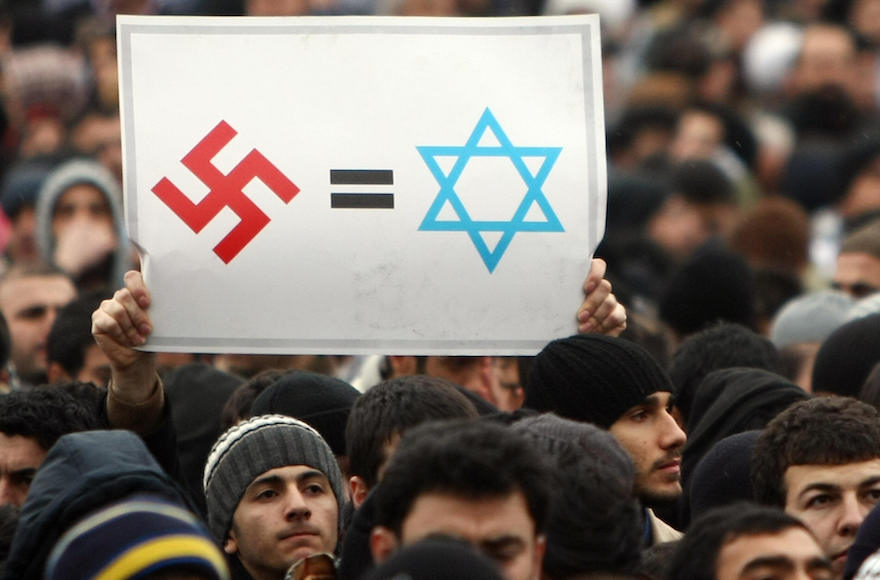 A Turkish demonstrator holding a banner with a Nazi swastika and Star of David at Beyazit Square in Istanbul, Jan. 2, 2009. (Mustafa Ozer/AFP/Getty Images)

(JTA) — In recent years we have witnessed anti-Israel demonstrations that have turned overtly anti-Semitic and even violent, but police ignored initially as only political activity.

We have seen prosecutors and judges rule that an arson attack on a synagogue is not anti-Semitic because the perpetrator was motivated by anti-Israel sentiments.

And we have been confronted by traditional anti-Semitic invective where only the word “Zionist” has been substituted for “Jew,” as though that somehow makes it permissible.

What guidance can we offer police and other law enforcement officials in responding to anti-Semitic hate crimes and to raise public awareness of anti-Semitic discourse in its ever-changing forms?

Thirteen years have passed since a comprehensive and updated definition of anti-Semitism was drafted and adopted by the European Monitoring Centre on Racism and Xenophobia, or EUMC. Now, with proposed congressional legislation and various state and local initiatives, there are calls for employing a definition here.

The need for such a definition in Europe became evident after the EUMC conducted its first analysis of anti-Semitism in the European Union in 2004 showing that few of its monitors had any definition of anti-Semitism to guide them in preparing the report. I am proud that I was able to play a role, working with the EUMC director and Jewish organizations at the time, in the development of what has come to be known as the Working Definition of Anti-Semitism. It offers a succinct core definition along with clear and practical examples, including Jewish stereotypes, conspiracy theories, Holocaust denial and, notably, ways in which anti-Zionism can mask anti-Semitism.

Since then we have seen a steady and significant increase in incidents of anti-Semitism in Europe, including verbal, physical and even lethal attacks. It remains a constant presence on the internet and social media. While not a solution to the problem, the Working Definition has become a useful and important educational tool. It helps government and civil society organizations in their work of monitoring anti-Semitism, and law enforcement respond to and define anti-Semitic hate crimes.

In the years since its drafting, there has been growing recognition of its practical value. The Working Definition has been adopted by the 31 nations that constitute the International Holocaust Remembrance Alliance, it was endorsed by the European Parliament and was formally adopted by seven European governments. A version of this definition has long been used by the U.S. State Department when monitoring anti-Semitism internationally.

Can something that has such obvious merit in Europe be used in the United States?

America has also seen a significant increase in anti-Semitic incidents. Civil discourse is becoming more inflammatory and polarized. Raw and hateful anti-Semitic invective abounds on social media and physically in the public square, as we witnessed last summer in Charlottesville. We all feel the need to confront this and naturally seek new methods to do so.

The Working Definition has received special scrutiny because of its description of anti-Semitism as it relates to the State of Israel. Claims that Israel is a racist state and comparing contemporary Israeli policy to that of the Nazis can be examples of the ways in which anti-Semitism manifests itself.

It also cites the problem of holding Jews responsible for the actions of the State of Israel. At the same time, it states that criticism of Israel cannot be considered anti-Semitic.

This was both the most controversial section of the Working Definition and the most necessary.

Critics on the left claim that the mere mention of this definition is intended to muzzle criticism of Israel on campus. In the face of proposed legislation in South Carolina, several of the critics, including the Arab American Institute and Jewish Voice for Peace, have gone so far as to claim that endorsing the definition “will legitimize censorship of and punishment for political speech supportive of Palestinian human rights.” They have further maintained that it would lead to government “surveillance” of Muslim and Arab students. Such action would be reprehensible and illegal, and surely no one can realistically believe it would happen.

At the same time, Jewish students say that anti-Israel protests have sometimes turned into harassment and intimidation. This may not be widespread, but it is real. In such situations it is reasonable to ask whether employing the Working Definition could help. And the answer is a resounding “Yes, but …”

Yes, college and university administrators are challenged daily to maintain a hospitable environment for critical and even controversial thinking while insuring that the discourse is civil and respectful of a diverse student body. They must be mindful when racism or anti-Semitism or homophobia or other forms of intolerance threaten to upend this balance. As such, an awareness of anti-Semitism and the various ways it presents itself today can be helpful.

But the Working Definition is not intended to be a speech code, and it certainly must not restrict or inhibit our constitutionally protected freedom of expression.

Proposed congressional legislation known as the Anti-Semitism Awareness Act calls on the Department of Education to “take into consideration” the definition when evaluating under Title VI of the Civil Rights Act if Jewish students are facing a pattern of harassment and a hostile environment. Even though the bill only offers the definition as an additional tool when assessing the overall campus environment, opponents believe it will be misused. They fear that organizations on the right will use the Working Definition to demand an end to the Boycott, Divestment and Sanctions campaign targeting Israel and other anti-Israel activities. That may well happen, and those of us who believe in its utility will need to guard against it.

Yet we cannot let these extreme possibilities serve as reason to reject an important educational tool in these difficult times. Instead they remind us that we must employ it with care and consideration.

The views and opinions expressed in this article are those of the authors and do not necessarily reflect the views of JTA or its parent company, 70 Faces Media.