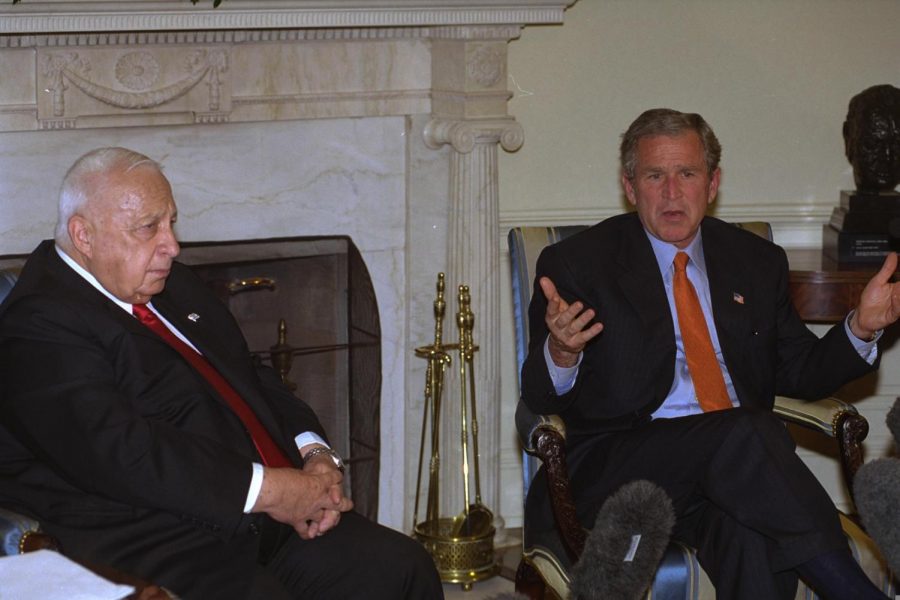 Before learning of the bombing in Rishon LeZion, Prime Minister Ariel Sharon and President George W. Bush meet at the White House on May 7, 2002, to discuss how to end the Second Intifada and make progress toward peace.

May 6, 1947 — Lehi Teenager Disappears
Alexander Rubowitz, 16, a member of the youth wing of Lehi (the Stern Gang), is chased, caught and forced into a car by a large, athletic man in Jerusalem’s Rehavia neighborhood while distributing propaganda. He is never seen again. Physical evidence and witnesses indicate that the abductor is British officer Roy Farran, who is believed to have beaten Rubowitz to death while trying to force him to identify fellow Lehi members.

May 7, 2002 — Bomber Kills 15 While Bush, Sharon Meet
On the third anniversary of the day when Israel and the Palestinian Authority were supposed to complete negotiations under the Oslo Accords, a suicide bomber kills 15 Israelis and wounds 55 others at a pool hall in Rishon LeZion while Prime Minister Ariel Sharon is meeting with U.S. President George W. Bush in Washington. Sharon blames PA President Yasser Arafat and flies home. Hamas claims credit for the bombing.

May 9, 1998 — Dana International Wins Eurovision
Trans woman Dana International performs the techno-pop song “Diva” in Birmingham, England, to become the third Israeli and the first since 1979 to win the Eurovision Song Contest. Born in Tel Aviv in 1969, she became Israel’s first drag queen at 18 and signed a record contract before having sex-reassignment surgery. She was a successful recording artist when she was selected to represent Israel at Eurovision despite some Orthodox objections.

May 10, 1948 — Meir, Jordan’s King Meet
The Jewish Agency’s Golda Meir travels in disguise to Amman, the capital of Transjordan, to meet with King Abdullah. They also secretly met at Naharayim in November 1947, when Meir offered support for Transjordan’s plan to annex the Arab areas of post-partition Palestine if the king kept his British-trained Arab Legion out of the war against Israel. But Abdullah says he no longer is free to operate independently of his Arab neighbors.

May 11, 1953 — Dulles Travels to Middle East
U.S. Secretary of State John Foster Dulles arrives in Cairo to begin a 2½-week fact-finding mission to Egypt, Israel, Jordan, Syria, Lebanon, Iraq, India, Pakistan and Libya. Dulles emphasizes that the new administration of Republican President Dwight Eisenhower is not beholden to American Jewish interests and is determined to take a balanced approach on policy and aid toward Israel and its Arab neighbors as part of Cold War politics.

May 12, 1965 — Israel, W. Germany Begin Diplomatic Ties
Israel and West Germany exchange notes establishing official diplomatic relations, completing a process of increasing connections that began with Israel’s acceptance of Holocaust reparations from West Germany in 1952. The relationship is beneficial to Israel but controversial, including the naming of a career military officer, Rolf Pauls, as West Germany’s first ambassador to Israel. Several Arab states respond by cutting off relations with West Germany.