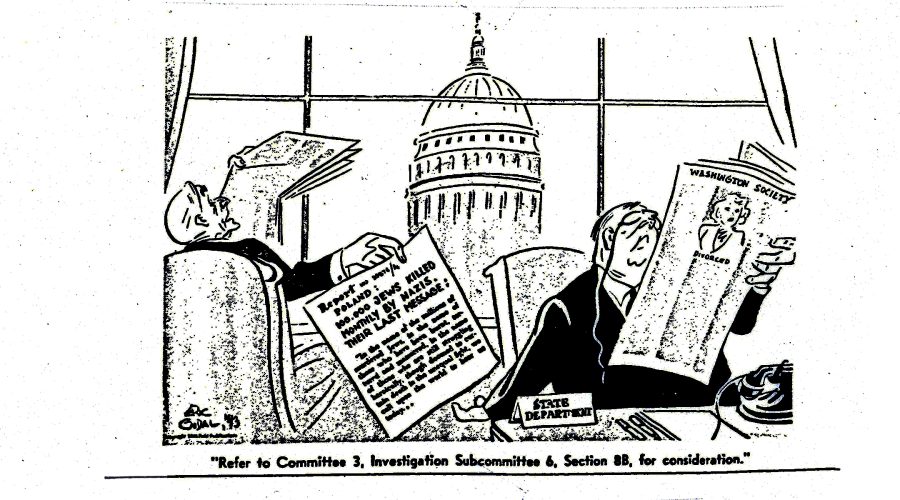 (New York Jewish Week via JTA) — German-Jewish illustrator Eric Godal first rose to prominence for his anti-Nazi cartoons in 1930s Germany. In the decades that followed, he garnered attention for his political cartoons that forcefully opposed Hitler, fascist regimes, antisemitism and bigotry.

And yet many of his cartoons are so germane to today’s issues, they look like they could have been drawn yesterday.

More than 50 pieces by Godal, who died in 1969, are now on display at the Society of Illustrators on Manhattan’s Upper East Side. The body of work on view — which includes political cartoons, posters and magazine illustrations — were created between the 1930s and the 1960s. They’re accompanied by descriptions of Godal’s remarkable life story, including of how he fled Nazi Germany.

“Cartoonists were an important editorial voice,” Rafael Medoff, one of the exhibit’s curators, told The New York Jewish Week. “That’s one of the reasons for the exhibit: to bring attention to this extraordinary cartoonist who used his cartoons to fight for Jewish rights and all human rights.”

Medoff, a professor of Jewish history and the founding director of the Washington-based David Wyman Institute for Holocaust Studies, co-curated the exhibit with Charlotte Bonelli, the director of the library and archives at the American Jewish Committee.

Godal was born in Berlin in 1899, and began his career as a daily political cartoonist for a leading German newspaper. In early 1933, after Hitler’s rise to power, the Gestapo came to arrest Godal, whose cartoons criticizing the Nazis had made him one of the first artists they targeted. Godal caught wind of the arrest and hailed a taxi that took him to Czechoslovakia. In Prague, Godal worked with many other German Jewish refugees to publish an anti-fascist satirical magazine.

He continued his cartoonist career after coming to New York City in 1935, eventually replacing Theodore Geisel — yes, Dr. Seuss — as the head political cartoonist for P.M., a New York daily. There, Godal published pro-democracy cartoons that advocated for a more tolerant society.

In the 1940s, Godal participated in an anti-racism project organized by the American Jewish Committee, a Jewish defense organization, that sought to combat new hate movements that they feared could develop in America during the tumultuous postwar years. 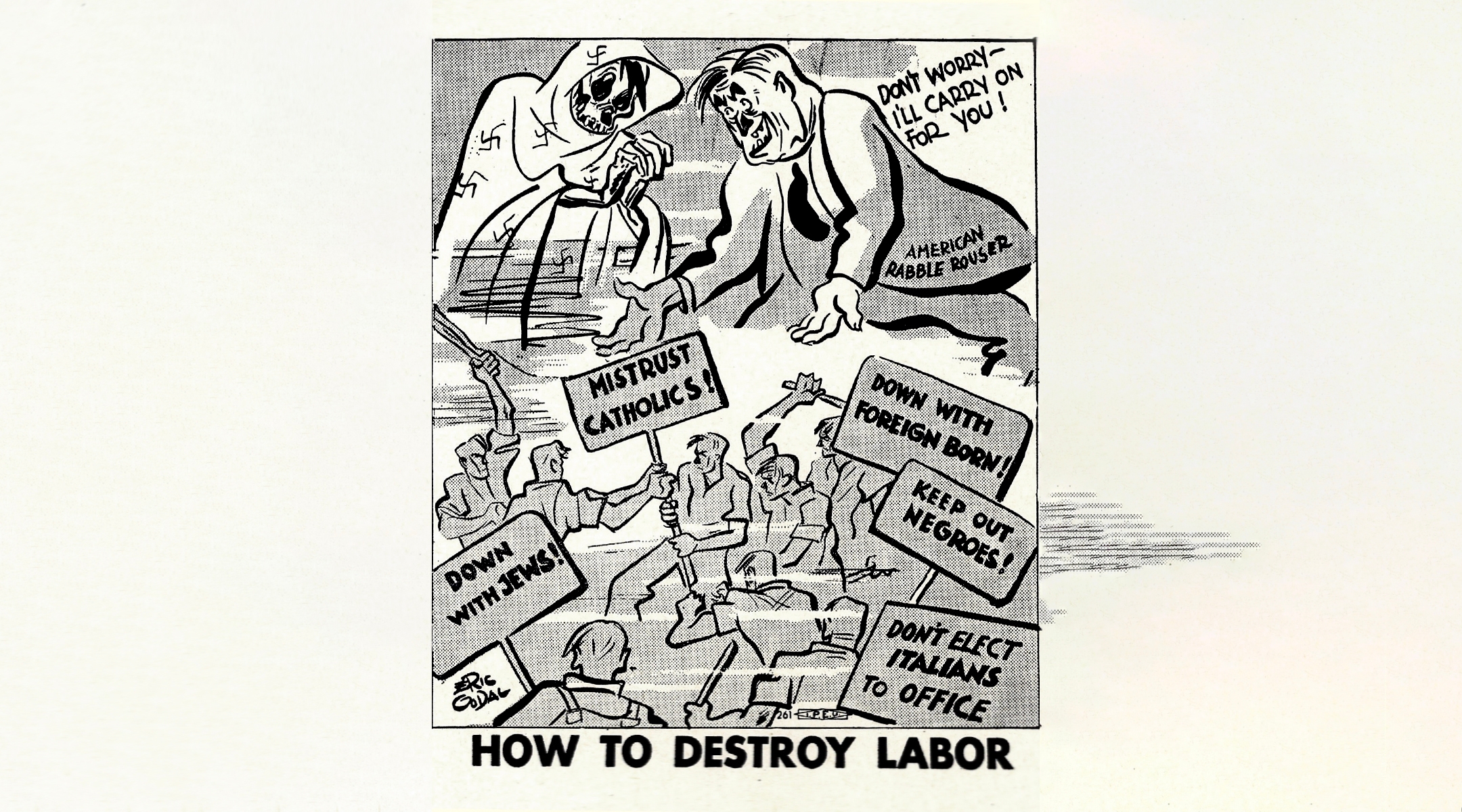 Fifty works from the political cartoonist Eric Godal are on display at the Society of Illustrators on the Upper East Side. (Courtesy of The David S. Wyman Institute for Holocaust Studies)

Among the highlights of the exhibit is one of his anti-fascist cartoons is from 1944 — meant to satirize America’s’ co-sponsorship of an exhibition with Franco’s Spain — which the exhibit describes as the first known cartoon depiction of the Nazis’gas chambers.

Medoff spoke to The New York Jewish Week about Godal’s extraordinary life, and the lessons we can glean from his work today.

This interview has been lightly edited for length and clarity.

What spoke to you about Eric Godal and his cartoons? What inspired this exhibition?

His life story is a remarkable journey. He was not merely a cartoonist commenting on events, he was living through many of the events that moved him to put pen to paper. He was drawing cartoons for the American press about the plight of Jewish refugees, while his elderly mother became one of those refugees.

A tragic aspect of the Godal story is that his widowed mother came from Germany in 1939 to join her son in New York, but she booked passage on the St. Louis [a ship filled with 937 mostly Jewish refugees who were denied entry by both Cuba and the United States]. She was sent back to Europe and was murdered when the Nazis overran Belgium. So here we have a man whose very life reflected this enormous tragedy that was overwhelming the Jewish people, which he was crying out against through his cartoons. He then lent his talents to the struggle to create the State of Israel.

At the same time, he was drawing cartoons not only about the Jewish cause. He also was part of a very important, little-known campaign undertaken by the American Jewish Committee in the 1940s and 1950s to combat all racism and all bigotry through the work of political cartoonists. They were really ahead of their time in recognizing that political cartoons could be powerful educational vehicles.

It’s notable that his cartoons advocated for Jews as well as others who were discriminated against. Was that a unique approach at the time?

Godal was part of the political left. He believed fighting antisemitism was part and parcel of the struggle against all bigotry or racism. The American Jewish Committee’s goal was to fight all racism, not by ignoring antisemitism, but by drawing attention to the fact that that people who were prejudiced against African Americans and other minority groups also tended to be hostile to Jews. So for Godal and for the American Jewish Committee, it was part of a broader struggle.

Because of what’s happening in Ukraine, these cartoons feel even more relevant now than they were a few weeks ago.

Godal drew an interesting series of anti-Soviet cartoons in 1951. They draw attention to various aspects of Soviet Communist society: the very troubling denial of civil rights, poverty and so on. They take on an added poignancy today. Godal describes features of Soviet society that have eerie echoes to what we read in today’s papers about Putin suppressing the freedom of the press in Russia. Then we have Godal’s cartoons from 1951 ridiculing the Soviet suppression of the media — some things have not changed. It’s a reminder of how Putin wants to drag Russia back to an earlier, darker, terrible era when the Russian people were brutally oppressed by their governments; when they were constantly fed lies through the ironically named newspaper Pravda, which means “truth.” Even though Godal was drawing these cartoons more than half a century ago, he touched on themes we’re seeing in the news every day.

Godal put issues that were not talked about widely into his cartoons. He drew the first known American cartoon depiction of the gas chambers in April of 1944. Why is this important?

Details about the mass murders were not widely known. The news that there was a mass murder of the Jews in Europe began reaching the United States in late 1942 and some of those reports did include references to the use of poison gas. But some segments of the press buried the news in their back pages. The Roosevelt administration played down news of the mass killings. So aspects of the mass murder, like the gas chambers, were not widely known until May 1944, when the Germans began the mass deportation of Jews from Hungary to Auschwitz. But this cartoon appeared several weeks before those articles had appeared in The New York Times.

The appearance of a cartoon like this is a reminder how much actually was known at the time. It’s important to remember that information about the mass murder was reaching the general press in the United States well before the Holocaust ended, when there was still ample time to have interrupted it or have rescued some of those Jews.

Did his cartoons criticize the American government’s role in the war?

Godal came very close to doing so in a striking cartoon from October 1943. He drew State Department officials who have just received a report about the mass murder of a 100,000 Jews being massacred daily; they’re filing it away without taking any interest. The cartoon is particularly striking because, as a general rule, American political cartoonists drawing cartoons about the plight of the Jews did not directly challenge the Roosevelt administration’s policies. There was a wartime attitude that it would be unpatriotic to directly criticize the president in the middle of a World War.

Godal takes direct aim at the Roosevelt administration for turning a deaf ear to the cries of the Jews in Europe. It’s an unusual cartoon in its frankness. It really captures something about the broader problem of indifference to persecution. I’m referring not just to the Holocaust, but to many genocides. For example, there are similar cartoons in the American press during the genocide in Darfur. Sadly we still need cartoonists to draw our attention to the instinct to look away during times of terrible human rights violations.

What do you hope people take away from Godal’s work?

“Eric Godal: A Cartoonist’s Fight for Human Rights” is on view at the Society of Illustrators, 128 East 63rd Street, until April 30.

—
The post This Jewish political cartoonist’s work from the ’30s through the ’60s is more relevant than ever appeared first on Jewish Telegraphic Agency.