These Israeli teens oppose the occupation. But should that get them out of the army? 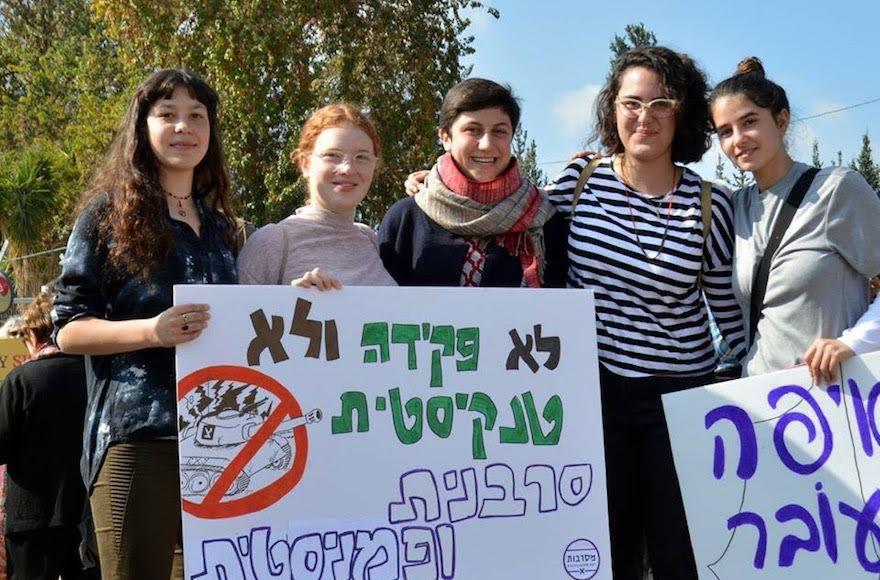 Tamar Alon, second from left, and Tamar Zeevi, center, protesting against being drafted into the Israeli army. The sign reads, “Neither clerks nor tank drivers, we are refusers and feminists.” (Courtesy of Mesarvot)

Andrew Tobin
TEL AVIV (JTA) – They’re both named Tamar. They’re both 19. And they both refuse to perform mandatory service in the Israeli army because of their opposition to Israel’s actions in the West Bank.

But after back-to-back hearings at the Tel Hashomer army base Monday, the army deemed only Tamar Zeevi a conscientious objector. She was released after 115 days in a military prison Thursday, while Tamar Alon remains in her cell.

The military committee that rules on objector claims won’t comment on individual cases. But Mesarvot, an organization of feminist army refusers to which Zeevi and Alon belong released a statement after Zeevi’s release saying it was the first time in 15 years that the army had recognized an “occupation-refuser” as a conscientious objector. The army has usually required that conscientious objectors be pacifists, not political objectors, the statement said.

Despite Israel’s deep political divides and its near universal conscription, conscientious objection is rare in the country. Still, cases like these are closely watched because of the precedents they could set.

Liron Libman, a former chief military prosecutor and former head of the army’s international law department, warned that recognizing “selective” objection — a refusal to serve in certain circumstances — is highly subjective and could undermine the army’s authority. Libman, who retired from active duty in 2011, worries such criteria could open the door to problems like religious soldiers refusing orders to evacuate West Bank settlements.

Libman said the army’s Conscience Committee should stick with the definition of conscientious objection used by Israel’s High Court of Justice, which has repeatedly ruled that the army is only required to recognize pacifists as conscientious objectors. Those who oppose the occupation or other specific government policies do not qualify.

In a 2002 ruling that reviewed international positions on the matter, the High Court noted that only Switzerland recognizes “selective conscientious objection” — a standard that even the Swiss have since tightened. Current U.S. military policy says conscientious objectors must refuse to take part in war “in any form” because of religious or moral beliefs.

Israeli philosopher Avi Sagi, who helped decide both Tamars’ cases as the only civilian on the Conscience Committee, said the committee generally defines conscientious objection as refusal to serve in the army for reasons that are moral, not political. This is a more generous — and subjective — definition than required by Israeli law or other democracies with more liberal politics and fewer security threats, he said.

Based on his experience on the Conscience Committee, Sagi developed what he called a “double motivation” theory of conscientious objection. The basic idea is that a person seeking conscientious objector status should not be disqualified by political activism. But the person’s primary motivation must be to protect his or her values, not to change society or policy. In practice, motivation is supposed to be sussed out through questioning.

“The committee doesn’t need to base its decisions on [judicial] precedent,” Sagi told JTA. “As a liberal thinker in a liberal state, I believe we have a duty to defend those who can’t serve in the army on the basis of conscientious objection. That is why dialogue is so important to the committee’s work.”

Sagi would not speak about specific cases for privacy reasons, and the committee’s hearing are not public. But Zeevi said she described her motives to the committee in much more personal terms than did Alon. Alon’s mother, Moriah Shlomit, told the Israeli daily Haaretz that her daughter embraced the civil disobedience label.

“She stressed to the panel that she won’t change her conscience according to the panel’s definitions, which serve the army’s needs, even if she will have to continue paying a price for it and sit in prison,” Shlomit said, adding that her daughter also said, “Even if the committee insists on calling what I do civil disobedience, I’m happy to have that title, too.”

By contrast, Zeevi told JTA she described her own refusal to serve as a matter of personal conviction. In an essay she wrote in November on the day she was supposed to report for duty, she explained, she was “drawing a moral line” and “actively resisting a government and a policy that violates human rights and fuels violent and cruel reality.”

“[The committee] could see the difference between Tamar and me, because my primary goal in not joining the IDF was to be able to live with my values. I debated a lot with myself, with a lot of doubt and shame and all that,” she said. “For Tamar, it was all about creating a political discussion and trying to bring change.”

Zeevi was released Thursday evening from Prison 6 in northern Israel, where she served 115 days. Alon remained in Prison 4 in central Israel, where she has spent 125 days. The committee recommended Alon be brought before another panel that could release her on the grounds that she is unfit to serve.

“I think it was really important for them to separate between my case and Tamar Alon’s case,” Zeevi said. “They wanted to say there’s a big difference, even though our stances are not that different and I think both of us deserved to be released.”

The army did not respond to a request to explain how the Conscience Committee operates. But in a short email to JTA, it said that Zeevi’s case was in line with “long-standing policy.”

As the most senior member of the committee, Sagi said he is one of its most influential members. In July, he sent a letter to his colleagues urging them to correct what he said was a rare mistake. A panel had declined to recognize Omri Baranes, another female refuser, as a conscientious objector because she was not a pacifist, and she had appealed the decision.

“The committee’s basic rules indicate that the committee lacks knowledge of the nature of ‘conscientious objection,’” Sagi wrote. “The refuser seeks to protect his personal world and his values; he is not motivated by the desire to change the social and political order … A moral society and certainly a liberal society will do everything in its power to protect the world of the individual. It will do everything in its power not to bring the member of the civil community to a confrontation between his world and the social-moral system.”

Baranes’ appeal was successful and she was released in August after 67 days in army prison.

Although there have been Israeli resisters dating back to the 1948 War of Independence, they have been few and far between and widely condemned as elitists. That doesn’t mean Israelis don’t try to get out of their army obligations. Thousands of Israelis every year get dubious psychiatric or religious exemptions from service. Nearly 30 percent of Israelis eligible for recruitment, which does not include non-Jews or the haredi Orthodox, did not serve last year, according to army sources.

Zeevi, who comes from a well-off family in Jerusalem, said most of her family and close friends support her refusal to serve, but many other Israelis do not. Even one of her sisters thinks she is shirking her duty.

“She has a friend who died in [the 2014 Gaza war],” Zeevi said. “She just disagrees with my stand and thinks it’s part of my responsibility to serve in the military.”