There’s no wrong way to mourn for Ruth Bader Ginsburg 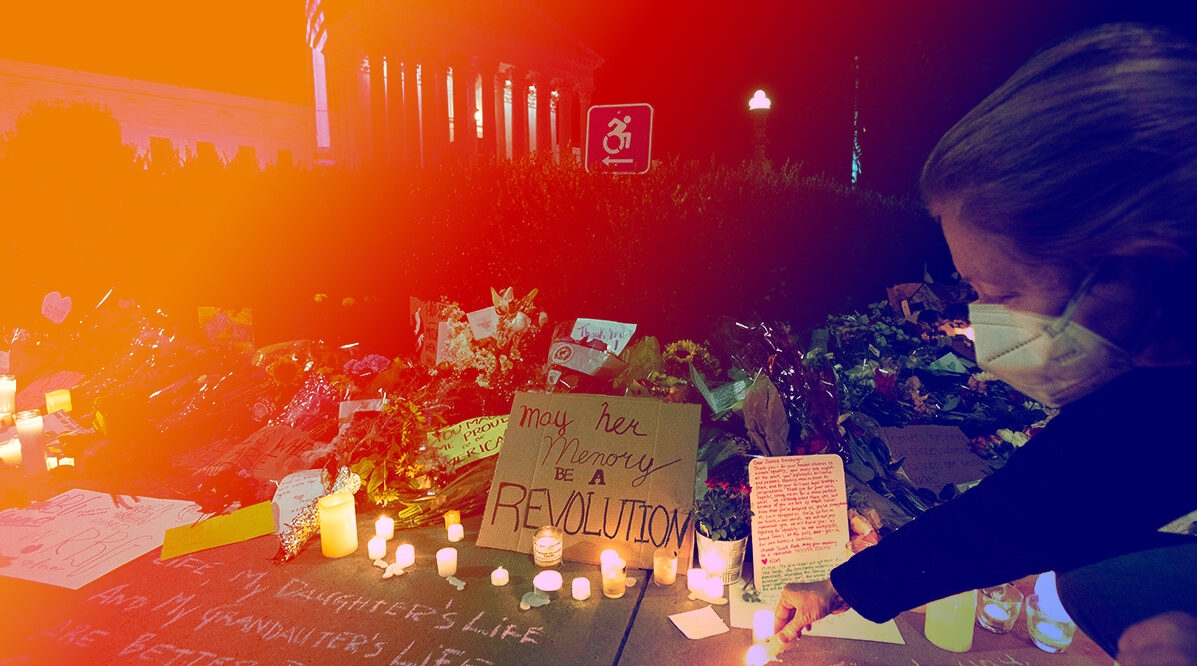 This article originally appeared in Alma.

(JTA) — One year after a dear friend of mine passed away, I bought a yahrzeit candle from the grocery store and lit it in his memory. My friend wasn’t Jewish, and in fact wasn’t religious at all, so the symbolism of the candle wouldn’t have held much meaning to him. But my small memorial, while in honor of him, was not for him — it was for me.

Grief is a deeply personal thing. Each of us finds our own ways to process the loss of someone we love, and we often don’t know what that will look like until we’re in the very throes of it, grasping for anything and everything that will make us feel better in a moment of deep despair.

If individual grief is complicated, public grief is an entirely different beast. Since news broke of the passing of Supreme Court Justice Ruth Bader Ginsburg last Friday night, on the eve of Rosh Hashanah no less, my social media feeds instantly filled with eulogies for the trailblazing icon. Among the many tweets simply saying “no no no no” and “F***,” my Jewish friends shared sentiments along the lines of “may her memory be a blessing” and “may her memory be a revolution.” My non-Jewish friends wrote things like “RIP RBG” and “rest in power.”

I started seeing footage from the steps of the courthouse in D.C., where seemingly hundreds of people gathered quickly for an impromptu memorial. I read that someone had brought a shofar, the ram’s horn that Jews blow throughout the High Holidays, and was blasting it through the eerie September air. Some Jews brought rocks to add to a makeshift collection of signs and candles, echoing the Jewish tradition of leaving rocks on graves; others brought bouquets of flowers. I also saw that some people started singing “Amazing Grace,” a Christian hymn about finding Jesus that is often sung at Christian services and funerals.

That’s when the outrage began.

“Why are people singing a Christian song to eulogize a Jewish woman?” read too many tweets in my feed to count.

The general consensus seemed to be that honoring Ginsburg with Christian terminology and customs was deeply disrespectful to a figure who was outspoken during her lifetime about the ways in which Jewish values influenced her work. Others went on to decry how little non-Jews knew about Jewish mourning rituals and how offensive that ignorance is.

My first thought, honestly? “Amazing Grace” is a damn beautiful song, and I’d be honored if anyone wants to sing it at my Jewish funeral when the time comes.

Look, I totally get it. For Jews, and Jewish women in particular, Ruth Bader Ginsburg wasn’t just the second woman to serve on the Supreme Court. She was the first Jewish woman to do so. She wasn’t just a tireless advocate for gender equality, known for her infamous dissents. She was a Jewish woman who changed history, fighting both misogyny and anti-Semitism on her way to one of the highest honors in the land. To erase RBG’s Jewishness is to erase the very essence of who she was and what she stood for.

But I really don’t think that’s what was happening on the steps of the Supreme Court or in our social media feeds. I didn’t see people not caring — I saw people caring so much that they treated the passing of Ruth Bader Ginsburg the same way they would have for a dear family friend. They pulled out all the stops, all the processes of grief that have comforted them in the past — and all the ways that they have been taught to honor someone special who is no longer here.

Every culture and religion has its own mourning rituals, and it’s a lot to expect that everyone familiarize themselves with each and every one. I personally have no idea what Hindu mourning rituals look like; I wouldn’t know the first thing about how Indigenous Americans honor their dead. I would absolutely love to learn about them (and in fact, I think I’ll go google that right now), and I’m always grateful for anyone generous enough to share a small slice of their culture with me.

Along those lines, I’m more than happy to inform my non-Jewish friends about the phrases Jews say when someone has passed, or how shiva works, or what the Mourner’s Kaddish is. But I’m also not offended if, in the immediate aftermath of a loss that so many felt on a deep, personal level, people turned to their own customs to honor RBG and bring some comfort to themselves.

As Jews, we’re used to our biggest moments flying under the radar. Nobody seems to want to pay attention to anti-Semitism as much as we do. When tragedy strikes the Jewish community, it gets a day of coverage in mainstream media and then the rest of the world moves on. The fact that Ruth Bader Ginsburg meant so much to so many people — and not just Jews — is one of the rare moments when our grief is echoed by the rest of the world. Let’s not pick apart how others choose to show that grief — let’s just be grateful we’re not in this alone.