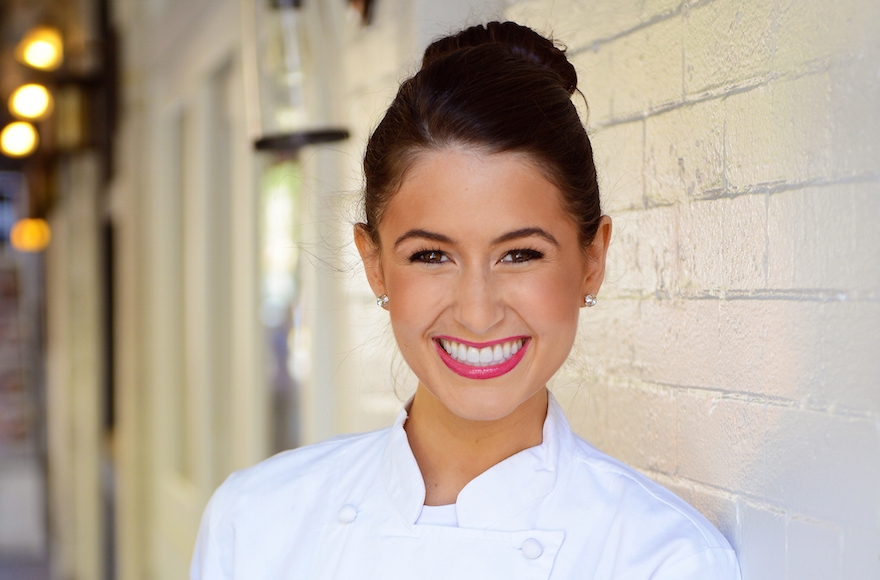 NEW YORK (JTA) — There’s a buzzy new eatery on the corner of Bleecker and MacDougal streets in Manhattan’s Greenwich Village. The restaurant, by CHLOE, is garnering consistently good reviews and attracting slews of young, hip diners. Recently it even hosted the launch of a lingerie-line collaboration between two “it” girls.

And, oh yes: by CHLOE is also entirely vegan and kosher.

Chef Chloe Coscarelli made her national debut on the first season of Food Network’s “Cupcake Wars” in 2009, winning an episode of the TV competition with her three all-vegan flavors of the portable sweet treats: raspberry tiramisu, chocolate strawberry shortcake and dark chocolate topped with dipped orange peel. Perhaps most impressive was that Coscarelli beat competitors who were baking with butter, milk and eggs.

One judge, the French pastry chef Florian Bellanger, gave her the ultimate compliment: “I never tasted vegan food so good.”

Coscarelli, 27, has since published three successful vegan cookbooks and built a commendable reputation within the vegan community — she has some 23,000-plus followers on Instagram and nearly 20,000 on Twitter.

And in July, the fresh-faced California native and Natural Gourmet Institute graduate accepted a new challenge — opening up by CHLOE, a vegan fast-casual restaurant, at the spot where Cafe Borgia, the legendary 1960s haunt of beatniks and artists, once stood. (In homage to the poets who logged hours at that establishment, by CHLOE has juices with names like “On the Road,” made up of activated charcoal, lemon, maple syrup and filtered water — a combo that’s good for hangovers, according to the menu).

Opening a restaurant was always a dream, she says, and after seeing the success of her cookbooks over the last few years, “the timing felt right to make that dream a reality.”

By CHLOE has already been a resounding success — just two months after opening, the restaurant announced its first planned expansion: an outpost in the Flatiron District slated to open next spring.

By CHLOE touches on several trends, including juice bars, health-conscious veganism (touted by the likes of Beyonce, who recently announced that she has dabbled in veganism) and the growth of fast-casual restaurants by brand-name chefs (Danny Meyer’s Shake Shack is an example of the very non-vegan variety). There’s also been something of a renaissance of the veggie burger in New York City of late, with Superiority Burger, a tiny spot that opened recently in the East Village, making its own headlines. In fact, by CHLOE’s most popular dish so far, Coscarelli says — and the one we saw ordered most often during a recent weekday lunch — is the Guac Burger, a patty made with sweet potatoes, quinoa and black beans topped with smashed avocado, corn salsa and chipotle aioli.

The food at by CHLOE — which includes indulgent options like macaroni and cheese, burgers and, of course, cupcakes — does away with the image of vegan food as all diet-friendly and bland. Plus, the eatery provides a rare opportunity for kosher diners to nosh on (shiitake) bacon, eat a “burger,” (consisting of tempeh, lentils, chia and walnuts) and conclude the meal with ice “cream,” made of a combination of almond and coconut milk.

Of her decision to have the restaurant certified kosher by the International Kosher Council, Coscarelli says: “I have a lot of friends in the kosher community, so why not serve them, too? Plus, vegan food is naturally a lot easier to make kosher because there are no animal products.

“I, for one, need to eat my dessert right after my meal … [so] let’s just all eat vegan and there are no issues,” she adds with her signature megawatt smile. “That’s always been a no-brainer for me.”

Plus, since the wine has to be vegan, too — animal products are sometimes used in wine as clarifying “fining agents” — kosher varieties presented a good option.

“For us it’s about delivering a cleaner product and process — and working with companies with more transparency,” Coscarelli says. “That’s required for both a vegan establishment and a kosher establishment.”

Kosher customers have been among the most supportive of by CHLOE, she says, adding that it already has several kosher regulars. 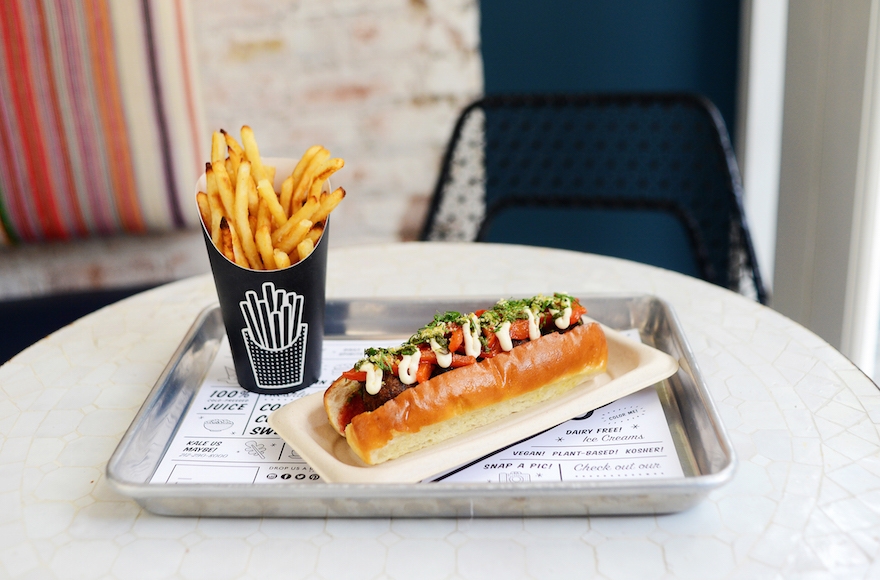 A pesto “meatball” sandwich with a side of air-baked french fries at by CHLOE. (Mikey Pozarik/Paperwhite Studio)

Coscarelli, whose mother is Jewish, didn’t grow up observant, but her family did celebrate Jewish holidays.

“We embraced the food,” she says, though she’s now learned to give them a vegan spin. Noodle kugel can be made vegan by using cheese made from nuts, she says. And matzah ball soup is easy to make without meat and by using chia seeds to replace the eggs in the matzah balls.

For Coscarelli, the idea is not to make fake foods with myriad, unpronounceable chemicals — just try reading the label of a non-dairy creamer — it’s to replicate the flavors and textures of non-vegan foods using other natural ingredients. With its coffee, for example, the restaurant serves a vegan half-and-half that’s made of cashew and almond cream with vanilla beans and agave.

Almost everything at by CHLOE is homemade; macaroni and cheese is made with sweet potato cashew sauce topped with shiitake bacon and almond parmesan.

Unlike non-vegan chefs who tend to focus either on savories or sweets, Coscarelli does both. At the restaurant, there’s a display case full of vegan desserts, including chocolate chip cookies, the raspberry tiramisu cupcake that helped her win “Cupcake Wars” and a Chlostess Cupcake — Coscarelli’s take on a Hostess cupcake.

The foods are all the result of over two years of recipe testing, she says.

“I wanted to show people how accessible and delicious vegan food can be,” Coscarelli says. “It’s a great way to spread the message and make people feel better about what they’re eating. For me it’s a passion more than a restrictive way of eating.”

As a child, Coscarelli decided to go vegetarian for reasons connected to animal cruelty. Once she made the connection between animals and the meat she was eating, she never looked back. But, she says, she found herself limited to unhealthy and “boring” foods like cheese pizzas and quesadillas. When she started exploring vegan food, “I found it more exciting, and more well thought out. I’ve been vegan for over 10 years and have liked it way better than being vegetarian.”

Eventually, Coscarelli says, she’d like to continue to expand the by CHLOE brand to more locations (perhaps by design, by CHLOE-branded juices and vegan salads would comfortably sit on the shelves at Whole Foods). But Coscarelli says for now, she will focus on working out all the kinks and making the restaurant run as smoothly as possible. (Coming up: weekend brunch).

And the hard work has already paid off – thanks in large part to the regulars who frequent the joint.

“I know everyone says their kids are the best, that their dog is the cutest, but I really think our customers are the best,” Coscarelli says. “I never dreamed we’d have so many regulars so early on.”