WASHINGTON (JTA) — Welcome to The Tell, the inside scoop on this week’s Jewish political news by Ron Kampeas, JTA’s Washington Bureau chief.

Joe Biden’s vision is expanding, literally: The page on his website labeled “Joe’s Vision” has about doubled in the last week or so, to 35 categories.

The most recent is “Joe Biden’s Agenda for the Jewish Community.” We’ve discussed here how central one of Biden’s appeals to the Jewish community is, to combat the rise in anti-Semitism on the right, to his entire campaign, and sure enough, his Jewish agenda page gets to it straight away.

But on foreign policy, Biden’s through-line is distinguishing himself from Trump and returning to a sense of coherence. Biden has repeatedly since his campaign was launched blasted Trump’s policies as muddled above all.

On Iran, Biden told the Council on Foreign Relations a year ago, Trump has “no viable plan.” On North Korea, Biden said, “diplomacy requires a strategy, a process, and competent leadership to deliver.” On Afghanistan, “President Trump has systematically undercut his negotiators.” And so on.

“The most important thing” for the next president “is to clear up the raft of confusion over American policy objectives in the region,” Tamara Cofman Wittes, an Obama administration Middle East policy alum who now is a senior fellow at the Brookings Institution, told me.

So how coherent is Biden’s Middle East policy? Personal relationships are key to the former vice president, and you can map out a policy by pinning it to his relationships with three people: Golda Meir, Menachem Begin and Barack Obama.

Biden’s affection for Golda Meir has become something of an internet meme. But it is the timing of his 1973 encounter with the former Israeli leader that underscores how seminal the visit was in shaping his views. It was in the lead-up to the Yom Kippur War, and the 30-year-old freshman senator was genuinely spooked by Israel’s vulnerability.

“I remember driving from Cairo all the way out to the Suez,” Biden told an Israel Independence Day celebration in Washington in 2015, referring to the Egyptian leg of that trip. “And you could see these great plumes of dust and sand. But none [of] it seemed isolated. It turns out it was maneuvers taking place in the desert. And I was really worried. And we went through, and [Golda Meir] painted a bleak, bleak picture — scared the hell out of me, quite frankly, about the odds.”

It’s not just talk about the need to protect Israel. We can see the effects it still has on him today. While Biden is making a point of reaching out to his party’s left, accepting the endorsement of J Street, the liberal Jewish Middle East policy group, and of Bernie Sanders, his main rival for the nomination, he’s still a staunch defender of the Jewish state.

He departs dramatically from the left’s calls to leverage aid to Israel to pressure it to make concessions. He said last November after the J Street conference that it would be a “gigantic mistake” and “absolutely outrageous” to leverage aid.

Biden’s campaign staff, answering a series of my questions on the Middle East, pointed me to his recent statements, and securing Israel was paramount.

“Palestinian leaders should end the incitement and glorification of violence, and they must begin to level with their people about the legitimacy and permanence of Israel as a Jewish state in the historic homeland of the Jewish people,” was Biden’s response to the Council on Foreign Relations when he was asked about the two-state solution.

Republicans seeking fodder to attack Biden have already pointed to a closed 1982 meeting that then-Israeli Prime Minister Menachem Begin had with Democratic senators. Biden and Begin yelled at each other, is the essence of the story, and Begin said Israel would abjure U.S. aid rather than give in to U.S. demands. (Biden in the meeting had raised Israel’s settlement expansion — just give me a second here to contemplate that “settlement expansion” has been an issue since I was 22 years old — and other senators were critical of Israel’s invasion of Lebanon.)

The twist is, if you read accounts of the encounter, Biden was being descriptive, not prescriptive: He was telling Begin what was likely to happen — there would be pressure to cut aid to Israel — not that he would recommend it.

That’s been the template of his contentions with Israel: The U.S. has your back, but don’t be your worst enemy. “Israel could get into a fistfight with this country, and we’d still defend you,” Biden told Michael Oren in 2010, then the Israeli ambassador to the United States, when the U.S.-Israel was at a low over (you guessed it) settlement expansion, according to Oren’s autobiography, “Ally.”

And that was the tenor of the statement he sent to the Jewish Telegraphic Agency this week, warning Israel’s leaders against scuttling the two-state solution — which he sees as critical to Israel’s survival — by annexing parts of the West Bank.

“A priority now for the cause of Israeli-Palestinian peace should be resuming our dialogue with the Palestinians and pressing Israel not to take actions that make a two-state solution impossible,” Biden said. “I will reopen the U.S. consulate in East Jerusalem, find a way to reopen the PLO’s diplomatic mission in Washington, and resume the decades-long economic and security assistance efforts to the Palestinians that the Trump Administration stopped.”

Biden is ready to reverse every Trump policy that he sees as inhibiting two states: He will restore aid to the Palestinians, re-recognize the claim they have to Jerusalem and engage with them through diplomatic channels. Notably, however, he will not reverse Trump’s decision to move the embassy to Jerusalem.

Barack Obama: A deal with Iran, with tweaks

A lot of Biden sentences begin with “my friend Barack,” and his closeness to Obama extends to his pledge to revive Obama’s Middle East policies, particularly as they relate to the Iran nuclear deal.

“President Trump abandoned the Joint Comprehensive Plan of Action (JCPOA) — a deal that blocked Iran’s paths to nuclear weapons, as repeatedly verified by international inspectors — with no viable plan to produce a better one,” Biden told the Council on Foreign Relations.

Read between the lines, however, and Biden is — without explicitly criticizing Obama — making it clear he wants a more robust deal in place. In the same statement, Biden calls the deal a “starting point” and that he would work to “extend” its nuclear constraints. A key Israeli criticism of the deal was that its restrictions sunsetted too early.

“If Iran moves back into compliance with its nuclear obligations, I would reenter the JCPOA as a starting point to work alongside our allies in Europe and other world powers to extend the deal’s nuclear constraints,” he said.

One foreign policy area where Trump has been consistent with Obama has been in retreating from investing U.S. diplomatic and military capital in Syria, a trend that has alarmed Israel as Iran entrenches itself in the country in the wake of the victory of its ally, the Assad regime, in quelling the civil war.

But Biden also told The Washington Post last year that it is “imperative to remain engaged” in Syria to prevent the return of the Islamic State, one of the Assad regime’s antagonists in the war. Trump’s moves in the country “limit our ability to deescalate the war and shape a durable political settlement,” Biden said.

Two Obama national security council alums, Philip Gordon and Robert Malley, took to Foreign Policy magazine last month to call on Biden to pressure Israel not to annex parts of the West Bank. David Friedman, the U.S. ambassador to Israel and an author of the Trump peace plan that would allow Israel to go ahead with annexation, took to the New York Post to lambast them. (For a rebuttal to Friedman’s rebuttal, see the Israel Policy Forum’s Evan Gottesman) There’s one surprising line in Friedman’s Post piece: “Publicly seeking to frustrate the foreign policy of our duly elected president is downright obnoxious,” Friedman said. It’s a curious position for Friedman. “Publicly frustrating” the executive’s foreign policy is basically the job description of an array of lobbyists populating this town (hello AIPAC and the 2015 Iran deal), and also has been of … David Friedman, who took to Israel’s Arutz Sheva news site multiple times during the Obama administration to lambast Obama’s policies.

Chuck Schumer, the New York Democrat and Senate minority leader, told Orthodox Jews that the next round of payroll protection in a pandemic relief bill would include coverage for nonprofits employing more than 500 people.That would be a boon to national Orthodox Jewish groups and the larger schools and yeshivas. He also said it was likely that a $300 cap on tax-deductible charitable contributions would be lifted.

Missouri’s Republican governor does not want to loosen requirements for mail-in voting, despite the dangers of in-person voting during a pandemic. An array of Missouri rabbis of all streams gave Jews sanction to vote by mail, citing religious law.

Elan Carr, the top U.S. official monitoring anti-Semitism, says he wants to encourage other countries to be more affectionate with their Jews. 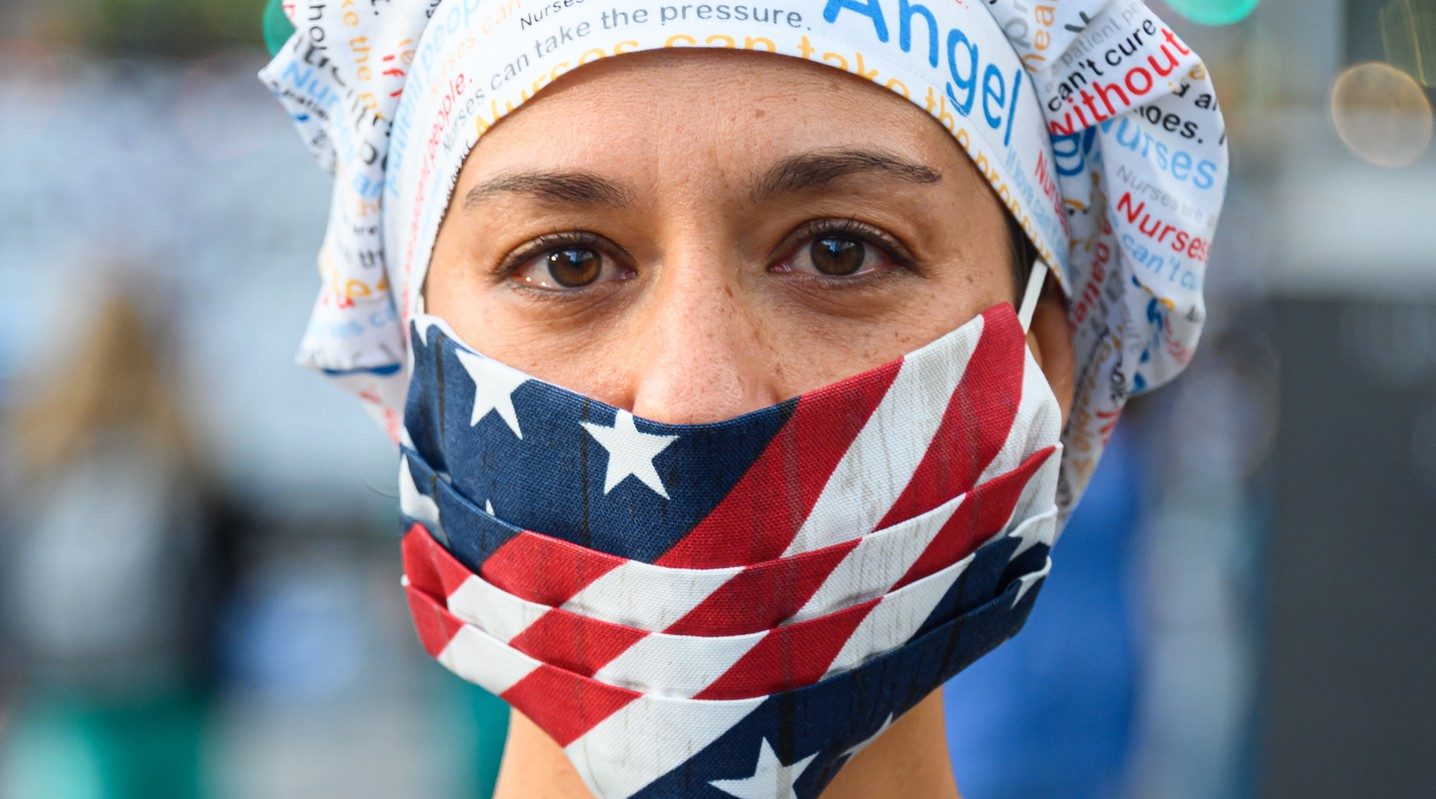 In The New York Times, Heather Hurlburt, who directs Models of Policy Change at the New America foundation, says the pandemic may signal an end to isolationism: You can’t fight a virus on your own. 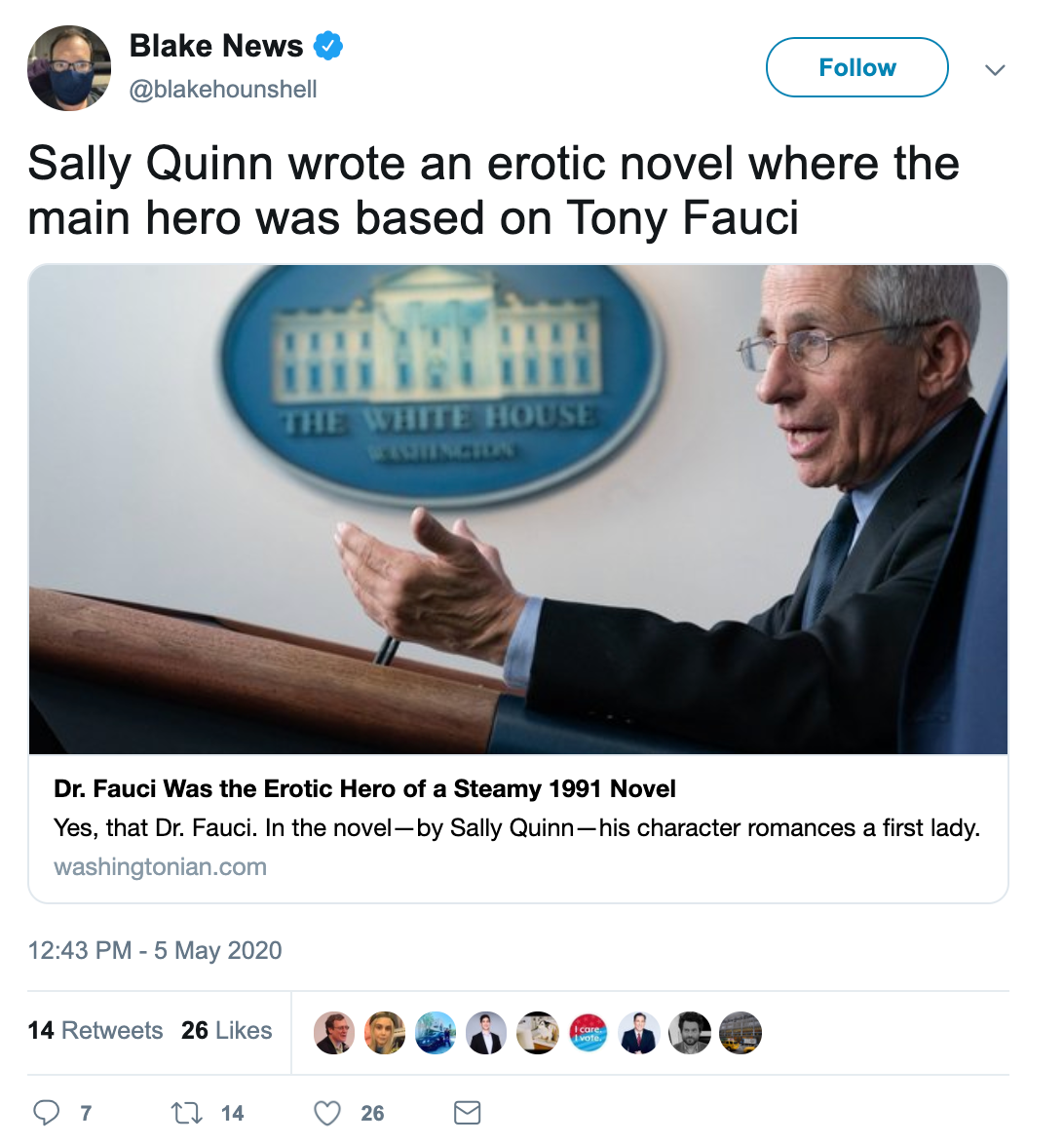 Blake Hounshell, a Politico editor, marvels that once upon a time, Anthony Fauci, the infectious diseases mandarin who has become the pandemic’s hero, was the model for a sex god in a 1990s potboiler by Washington society doyenne Sally Quinn. What’s more, the Washingtonian reports, she made him into a married Orthodox Jewish sex god.