The Gaza fighting is over, but Jewish-Arab violence in Israel still has me afraid 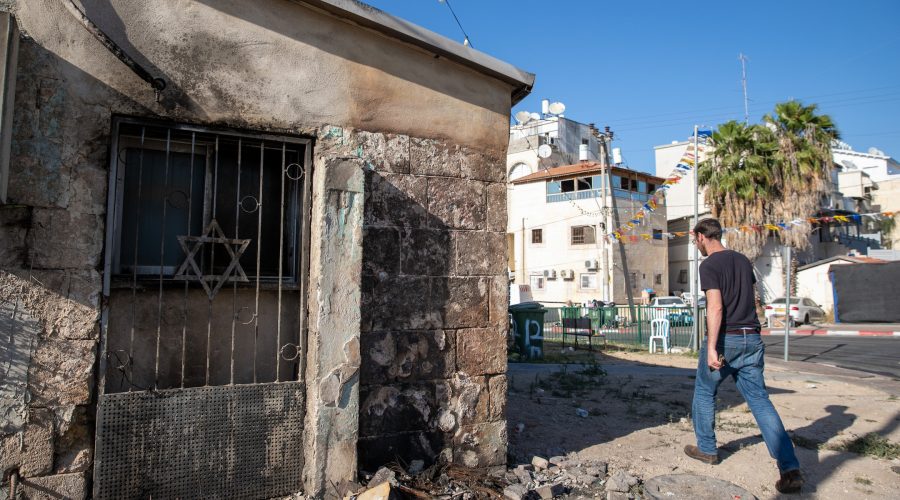 A man walks next to a synagogue that was set on fire in the central Israeli city of Lod following a night of violent protests, May 14, 2021. (Yossi Aloni/Flash90)

Was it safe to visit there, just days after the 11-day war between Israel and Hamas concluded? The conflict had begun with unrest in and around the Old City, which had unleashed violence between Arabs and Jews all over Israel.

“This isn’t the time. We should wait until the situation really calms down in Jerusalem,” one parent wrote. “I know that if I send my son I’ll worry about it that entire day.”

A father noted that the Old City’s Jewish Quarter, where the trip would take the kids, hadn’t seen any incidents during the recent violence. It’s important that the children visit the Western Wall, and Jerusalem generally, he wrote.

One mother added that as is customary in this country, an armed guard probably would accompany the class trip.

In Israel, we’re still emerging uneasily from a war that saw not only the deadliest round of fighting between Hamas and Israel since 2014 — killing more than 250 Palestinians in Gaza and about a dozen people in Israel — but also the worst violence in decades between Arabs and Jews inside Israel.

In this tiny nation where Arab and Jewish populations are inextricably intertwined, the threat of interethnic violence is what really worries me. It raises concerns not only about personal safety for me and other Jewish and Arab families in Israel, but about Israel’s future.

In Lod, a mixed Arab-Jewish city near Ben Gurion Airport and just 20 minutes from our home, an Israeli Jew was stoned to death by Arab Israelis. His nephew is in my son’s class.

His killing came after an Arab Israeli in Lod was shot to death; a Jewish suspect was arrested.

In Jaffa, Haifa and Tiberias, street fighting erupted between Jews and Arabs. Synagogues were firebombed, assailants threw Molotov cocktails into private homes and symbols of Arab-Jewish coexistence were burned – including a boutique hotel in the northern coastal city of Acre, where I was to take my wife for an upcoming getaway.

Jewish extremism is surging, too. Just south of Tel Aviv, Jews beat an Arab Israeli nearly to death in Bat Yam. Crowds of Jewish protesters have marched the streets of mixed cities chanting “Death to Arabs!” and vandalizing Arab-owned stores.

In southern Israel’s Negev Desert, Bedouins toppled utility poles along the highway to Arad, cutting off traffic to the city where Israeli novelist and peacenik Amos Oz lived until his death in 2018. On a highway that cuts through the West Bank, not far from my home in Israel proper, drivers were pelted with stones and bottles. When Arabs held mass protests last week, the acrid smell of burning tires permeated my neighborhood.

That all happened during the 11 days of fighting, when Hamas fired thousands of rockets at Israeli population centers and the Israel Defense Forces conducted hundreds of airstrikes in Gaza. In the city where I live, about midway between Jerusalem and Tel Aviv, we were fortunate enough to endure just three nights of rocket fire that sent us running for our bomb shelters as air raid sirens wailed.

Within Israel, hundreds of extra police and IDF Border Patrol officers have deployed in Lod and other cities to keep the peace. Many residents of areas where Jews and Arabs live side by side are taking stock of the damage and wondering if and when they will feel safe again.

Until this latest war, my standard approach was that anyplace inside Israel proper was pretty safe. It was only in the West Bank that warranted concern (Israelis are not permitted to enter Gaza).

So, for example, when I planned a trip to a rural part of the West Bank, some basic precautions were prudent: verifying in advance whether the route was safe, making sure the destination was secure. If we were hiking outside a site run by Israel’s Nature and Parks Authority requiring paid admission, and it wasn’t highly trafficked, going without a weapon was considered unadvisable.

Inside Israel, however, the situation was different. I’ve wandered around Arab towns and cities without any anxiety, hiked with my family in areas around Arab villages and pitched a tent with my kids as the sole camper in forests in the densely Arab Galilee without worrying about security. When I drive past Bedouin shacks that speckle the desert hills on the way to my brother-in-law’s sleepy southern town, my biggest concern is road safety, not violent extremists.

I often bike near the West Bank security fence, where I observe Palestinians sneaking through its holes into Israel, presumably to reach their jobs. We’ve always greeted each other respectfully. Three weeks ago, when a Palestinian approached me looking for work, I escorted him through my home and into my yard, where I paid him to do some gardening.

Now it feels different. My wife and I are making new calculations about what’s safe and what’s not, how we get to Jerusalem, where we might take our kids this summer. This tiny country suddenly seems even smaller, our movements even more circumscribed by new risks.

This is hardly the first time this land has seen violence between Arabs and Jews. The Israeli army was born of security units that were formed to protect Jewish kibbutzim, towns and cities from Arab violence.

“The brutal civil war of 1936-39 was only the beginning,” Israeli journalist Ari Shavit wrote in his 2013 book, “My Promised Land: The Triumph and Tragedy of Israel.” “The Jewish national movement was getting ready for a new round of violence. No one knew when, no one knew under what circumstances, but no one doubted that the conflict would erupt again, and viciously.”

In recent years, it felt like relations between Arabs and Jews inside Israel were improving. More and more Arabs were studying in Israeli universities, working alongside Jews in white-collar jobs and welcoming Jewish tourists into Arab towns.

The doctor who stitched me up when I cut my arm in an accident was Arab. The Arab fishmonger at the supermarket who debones my Norwegian salmon wishes me “Shabbat shalom.” Many of the paramedics who rescued the wounded and pulled out the dead from the crushing disaster at Mount Meron in late April that left 45 Israelis dead were Arab, and they wept for the dead alongside their Jewish colleagues.

To be sure, there were dark moments — not least, passage of a 2018 law that defined Israel as the “nation-state of the Jewish people,” enshrining for Arabs their place within Israel as second-class citizens.

But in the latest round of national elections, when even Israel’s right-wing parties found themselves courting the Arab vote and the Islamist Raam party, it felt like Israelis were waking up finally to the fact that our fates as Jews and Arabs are intertwined. That for one to be successful the other needs to succeed, and therefore it behooves us to be invested in each other’s well-being.

Perhaps this spasm of violence between Jews and Arabs underscores that point rather than belies it.

Arab Israelis — even those who prefer the term Palestinian or Palestinian Israeli — are part of the Israeli people now. Our fates are intertwined.

Efforts to separate us pave a path toward civil war. The Jews who attack Arabs and the Arabs who attack Jews, seeking to draw lines between us and them, advance nothing less than the destruction of democratic Israeli society.

Our ability to enjoy this land and our place in it depends on there being peace here — if not between Israelis and Palestinians, then at least within Israel. The rebuilding we have to do now is about more than clearing away the rubble. We must rebuild the ties that bind Israeli society together.

The alternative is to be mired in hate, fear and violence. That’s not the kind of place I want to live in.