ROYAL OAK, Michigan (JTA) – Nancy Gietzen needed to see if the plaque was still there.

She made her way to the foyer of the National Shrine of the Little Flower, the historic Catholic church and day school where the Jewish educator had been a substitute teacher for three years until she left after discovering how the parish had memorialized its founder, Father Charles Coughlin.

Sure enough, there it was, next to a glass case displaying the priest’s old chalice and vestments: “While Coughlin’s pastoral skills produced the splendid Shrine, his political involvement and passionate rhetoric opened him up to accusations of anti-Semitism.” The wording she remembered was intact.

“It was really upsetting,” Gietzen said. “‘Accusations’ of being antisemitic? What are you talking about?”

The plaque was, to say the least, a mild way to describe the man who had been America’s most vocal wellspring of antisemitism during the Great Depression. On Father Coughlin’s nationwide radio show, which ran from 1926-1940, he was a fearsome demagogue: parroting Nazi propaganda, telling his listeners that “international bankers” and “Jewish Communists” were plotting their demise, stating that the Jews deserved what happened to them at Kristallnacht, and encouraging the growth of the Christian Front, a pro-Nazi Christian militia that plotted to overthrow the U.S. government by attacking prominent Jews.

The proceeds from Coughlin’s media exploits (which included a political party and a fascist magazine called Social Justice) paid for the Shrine’s splendor, while ensuring that generations of Detroit Jews would stay far away from it.

Until now, that is. On Tuesday evening, the Shrine held an event titled “The Jewish-Catholic Relationship: Past, Present, and Future,” a series of historical lectures co-sponsored by the Archdiocese of Detroit and the local Jewish Community Relations Council, known as the JCRC/AJC. Jews and Catholics alike filed into the pews to hear two academics, one Jewish and one Catholic, discuss the history of relations between the two faiths, most of it revolving around Catholic antisemitism.

The choice of venue was deliberate. 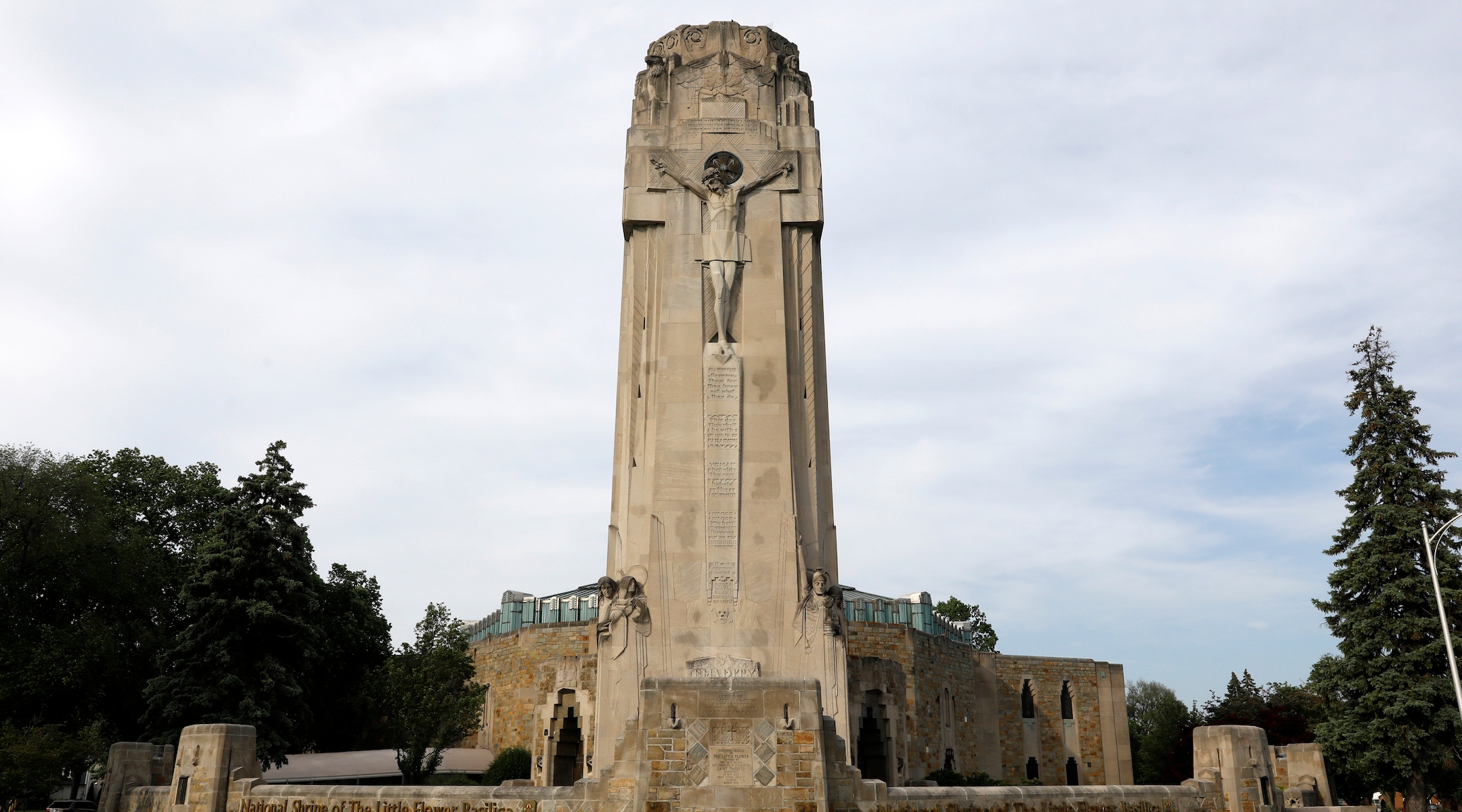 The Shrine of the Little Flower was founded by Father Charles Coughlin, who had an antisemitic radio show in the 1930s. (Jeff Kowalsky)

“There’s so much polarization in our society, we need this reconciliation in general,” Rabbi Asher Lopatin, executive director of the Detroit JCRC/AJC, told the Jewish Telegraphic Agency. “What’s more powerful than for Jews and Catholics to come together in Father Coughlin’s church?”

As a relatively new arrival to Detroit who lives in Huntington Woods, a heavily Jewish community that neighbors Shrine, Lopatin said he felt he had the right “naivete” to mount an event at the church inspired by the truth-and-reconciliation commissions formed in nations like South Africa and Rwanda following national traumas. Lopatin called the event a “truth and reconciliation” effort between Jews and Catholics — acknowledging the painful history of the past while breaking new ground in local relationships.

Shortly after Lopatin moved to Detroit and became the JCRC/AJC’s executive director in 2019, the group held the first such event at a different area church. A followup was delayed due to the COVID-19 pandemic, but there was interest from both parties in hosting an activity at Shrine, which staff at the archdiocese said had not held a Jewish outreach event in three decades — not since the church publicly apologized for Coughlin’s antisemitism, in 1992. 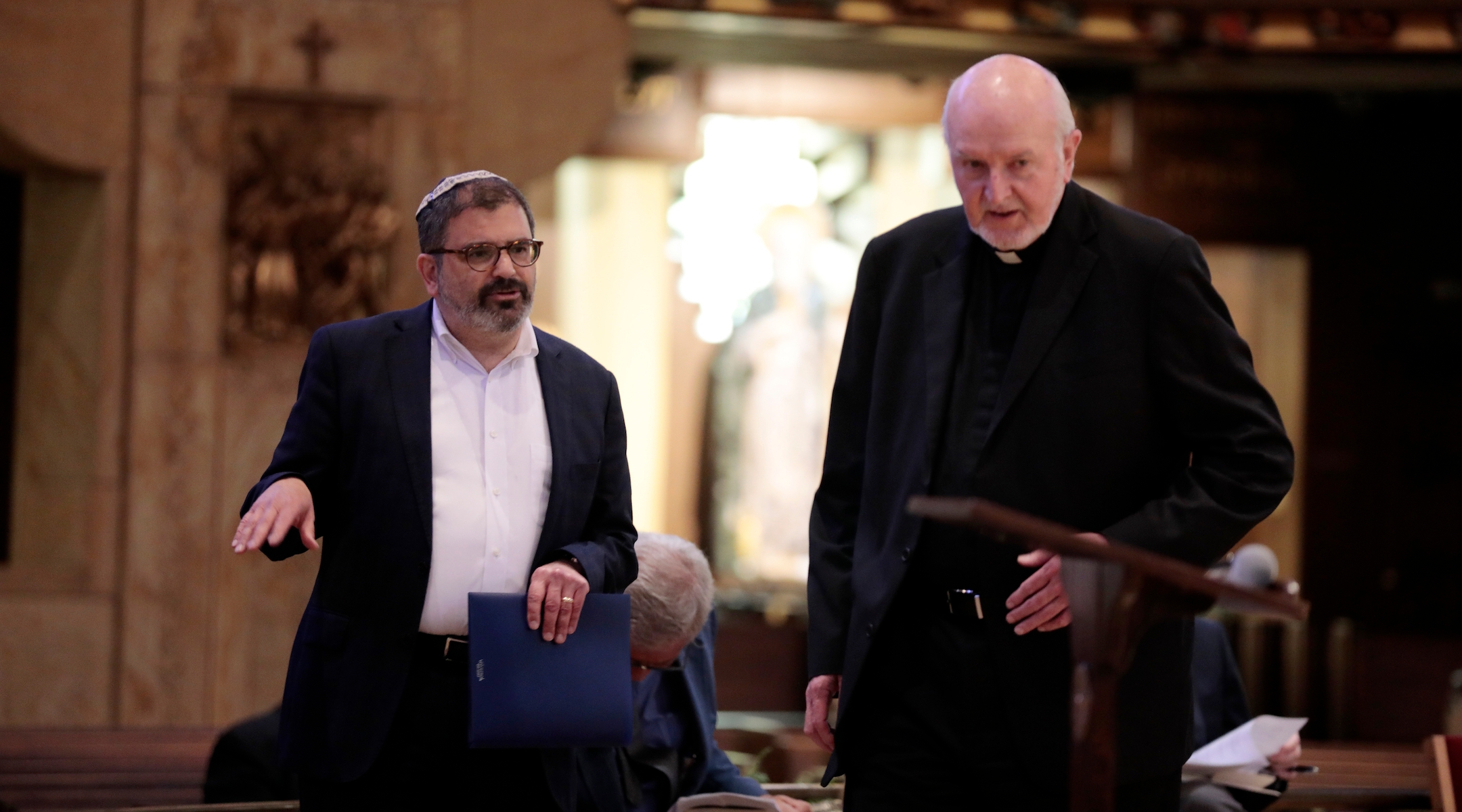 Lopatin with Monsignor Patrick Halfpenny of the National Shrine of the Little Flower, May 31, 2022. (Jeff Kowalsky)

“Father Coughlin was a force to be reckoned with in the 1930s. Getting that place built was a feat,” David Conrad, coordinator of interfaith relations at the archdiocese, told JTA. But, he said, “when you have to get our government and the Pope in Rome involved to shut down his views and his antisemitism, that’s a stain on our history. That’s an unavoidable fact. And it has to be recognized.”

The pairing of organizations at the head of Tuesday’s event made for an interesting historical wrinkle: The Detroit JCRC/AJC was originally founded in 1937 as the Jewish Community Council of Metropolitan Detroit, and one of its first orders of business was to publicly oppose Coughlin’s broadcasts as antisemitic. Meanwhile, the Archdiocese of Detroit supported and protected Coughlin for the first decade of his broadcasting career, until 1937, when the death of the area’s bishop combined with Coughlin’s escalating bad press led the Vatican to appoint a new bishop, Ed Mooney, who worked more aggressively to control the Radio Priest’s rhetoric.

Coughlin’s name was rarely mentioned during the program itself, although Robert Fastiggi, a historian at Sacred Heart Major Seminary in Detroit, opened up his talk from the priest’s old dais by stating, “Father Coughlin was antisemitic.” He added that there remained elements of antisemitism in the Church today, before running through a history of Jewish-Catholic relations that climaxed with Pope Paul VI’s 1965 reading of Nostra aetate, the papal declaration that Jews were not to blame for the death of Jesus Christ. 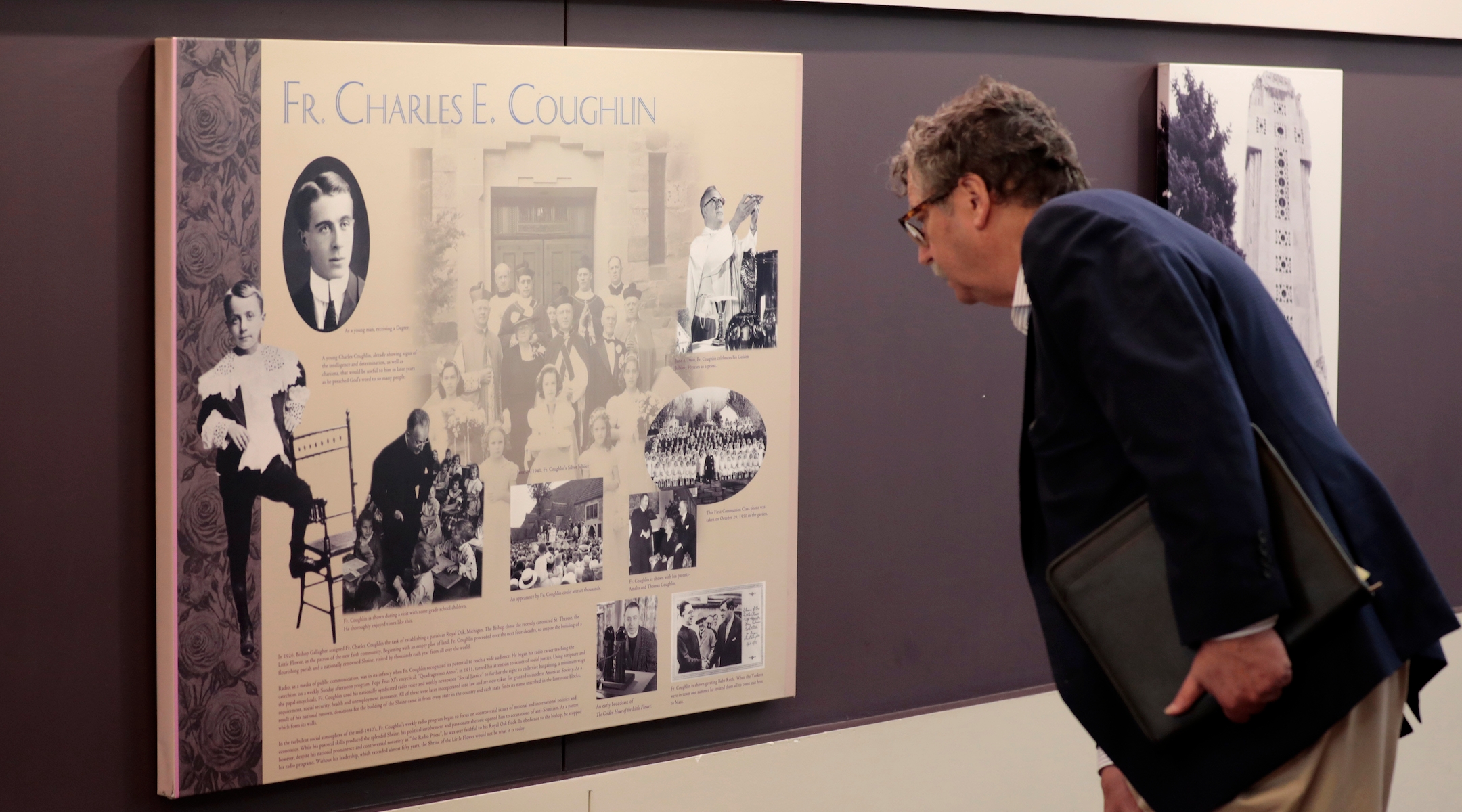 Levi Smith, a Jewish attendee at the event discussing “The Jewish-Catholic Relationship” at the National Shrine of the Little Flower in Royal Oak, Mich, inspects a plaque discussing the history of its antisemitic founder, Father Charles Coughlin, May 31, 2022. Smith later offered to help change the plaque’s wording, which he and other Jews said glazed over Coughlin’s antisemitism. (Jeff Kowalsky)

But during the Q&A section, Jewish attendee Levi Smith, vice president of a foundation devoted to the legacy of Detroit Jewish architect Albert Kahn, made a note of the venue’s history.

“Speaking on behalf of myself and a lot of other people in our community, when we drive past the Shrine we get scared,” Smith said. “Because of Father Coughlin.”

He asked if there were plans to change the wording on Shrine’s plaque and website to more accurately reflect Coughlin’s true nature, and offered to be part of any discussion on the subject: “Let’s sit down, let’s talk, and let’s come up with some improvements.”

After the lectures ended, attendees were invited to take a guided tour of the church, which will mark its centennial in 2026. They were also invited to a dessert reception, which the church’s monsignor, Patrick Halfpenny, took care to note was kosher. (Shrine’s current rector, Rev. Joseph Horn, suffered a heart attack in January and has since been recuperating. He was not in attendance at Tuesday’s event.)

As some of the Jews in attendance followed the tour guide, a Shrine parishioner named Bob Irwin approached Smith to tell him that there was a committee at the church reexamining its history, and Coughlin’s, in anticipation of its 100th anniversary.

The committee had already rewritten the plaques and were awaiting approval to mount them, Irwin said. The new history would more openly acknowledge Coughlin’s antisemitism and discuss the church’s efforts to assert its identity in the post-Coughlin years. Would Smith like to be a part of it?

Smith looked around at the church’s interior, at its high, arched ceilings and mounted artifacts of an antisemite who had once delivered his sermons to the world.