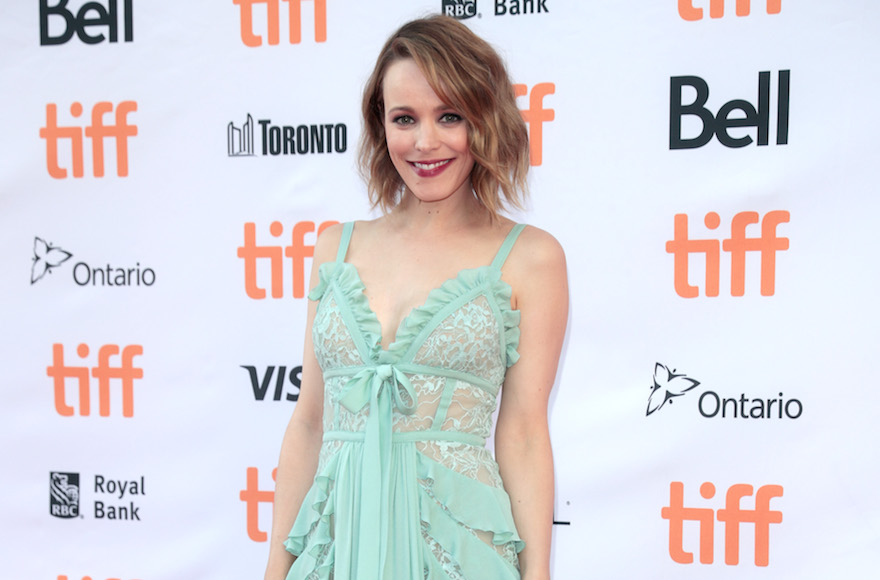 (JTA) — Rachel McAdams had hoped to prepare for her latest acting role as an Orthodox Jewish woman by getting a peek inside the Jewish community. But things didn’t quite go as planned.

The actress portrays a religious woman who has a love affair with a female childhood friend (played by Rachel Weisz) in the film “Disobedience.” The drama film, directer by Chilean filmmaker Sebastian Lelio, is based on a novel with the same name written by English-Jewish writer Naomi Alderman. It portrays the emotional reunion of the two women as adults, one of whom no longer lives a religious lifestyle.

McAdams, who is not Jewish, visited a kosher grocery store in Los Angeles ahead of Rosh Hashanah and attended a Shabbat dinner, but local Jewish residents quickly caught on.

“I tried to go undercover in the Orthodox community in L.A., and that didn’t really work out so well, but people were very warm and helpful,” the actress said at an event earlier this month at the Toronto International Film Festival, where the film premiered.

During her visit to the kosher supermarket, customers explained to her the custom of eating honey cake and pomegranate seeds during the Jewish New Year. A boy ran into the shop and asked to take a picture with the actress.

“The next day I was invited to a Shabbos dinner, and they said, ‘Oh, we heard you were buying chocolates at this shop at 7 o’clock last night,’” she recalled.

Visiting the Los Angeles community taught McAdams a little bit about the game Jews fondly refer to as “Jewish geography,” in which Jews identify mutual friends and acquaintances, often with surprising ease.

“It is like it’s own little town and everybody knows everyone and everything,” she said.