Survivor to SS guard on trial: ‘Soon we will both stand in front of the highest judge’ 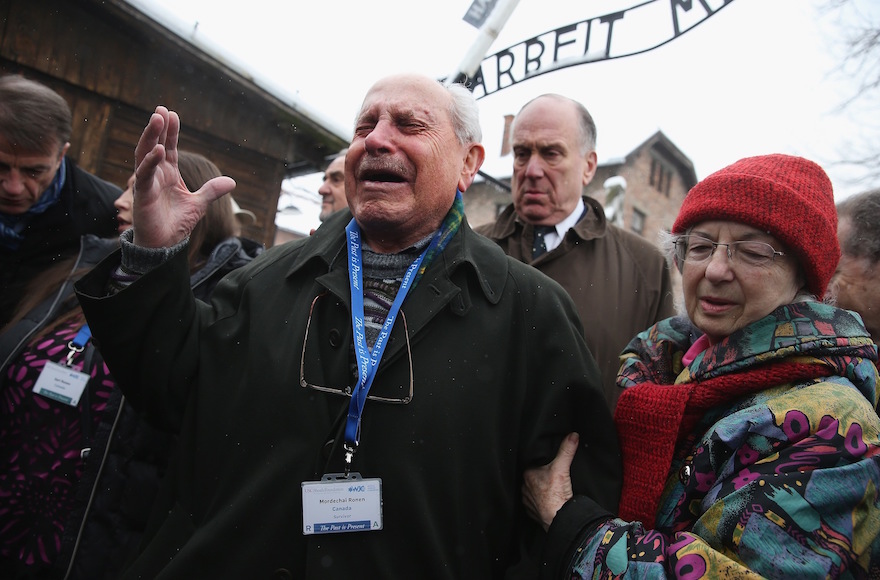 Mordechai Ronen, who was a prisoner at the Auschwitz concentration camp when he was an 11-year-old child and lost his mother, father and sisters there, breaking into tears as he walks through the camp, which is now a museum in Oswiecim, Poland, Jan. 26, 2015. (Sean Gallup/Getty Images)

(JTA) — The trial for a 94-year-old former Auschwitz guard opened with testimony from a 94-year-old Holocaust survivor, at the trial near Detmold, Germany, on Thursday, Reuters reported.

“I want to know why millions of Jews were killed and here we both are,” Schwarzbaum, who lost 35 family members in the Holocaust, said after detailing his memories of Auschwitz.

“Soon we will both stand in front of the highest judge — tell everyone here what happened, the way I’ve done just now!”

Hanning did not visibly react, according to Reuters.

Prosecutors said Hanning voluntarily joined the Waffen SS Death Head Unit at age 18, fighting in eastern Europe before being moved in January 1942 to Auschwitz, where he served until at least June 1944.

Hanning has denied participating in mass killings, but prosecutors argue that, as a guard, he helped facilitate the murders.

“The final decision over life and death was made by the SS men,” prosecutor Andreas Brendel said, after describing how SS guards determined which new arrivals would be sent to the gas chambers.

The trial is expected to last until the end of May.

Last year, 94-year-old Oskar Groening, known as the “bookkeeper of Auschwitz,” was sentenced for being an accessory to the murder of 300,000 people in Auschwitz.

Three other former death camp workers in their 90s — two men and one woman —are scheduled to go on trial in the next few months.

According to Reuters, Nazi hunter Efraim Zuroff, of the Simon Wiesenthal Center, said that age should not be an obstacle to prosecution.

“When you think of these cases, don’t think of frail, old, sick men and women but of young people who devoted their energies to a system that implemented the Final Solution and aimed to obliterate the Jewish people,” he said.