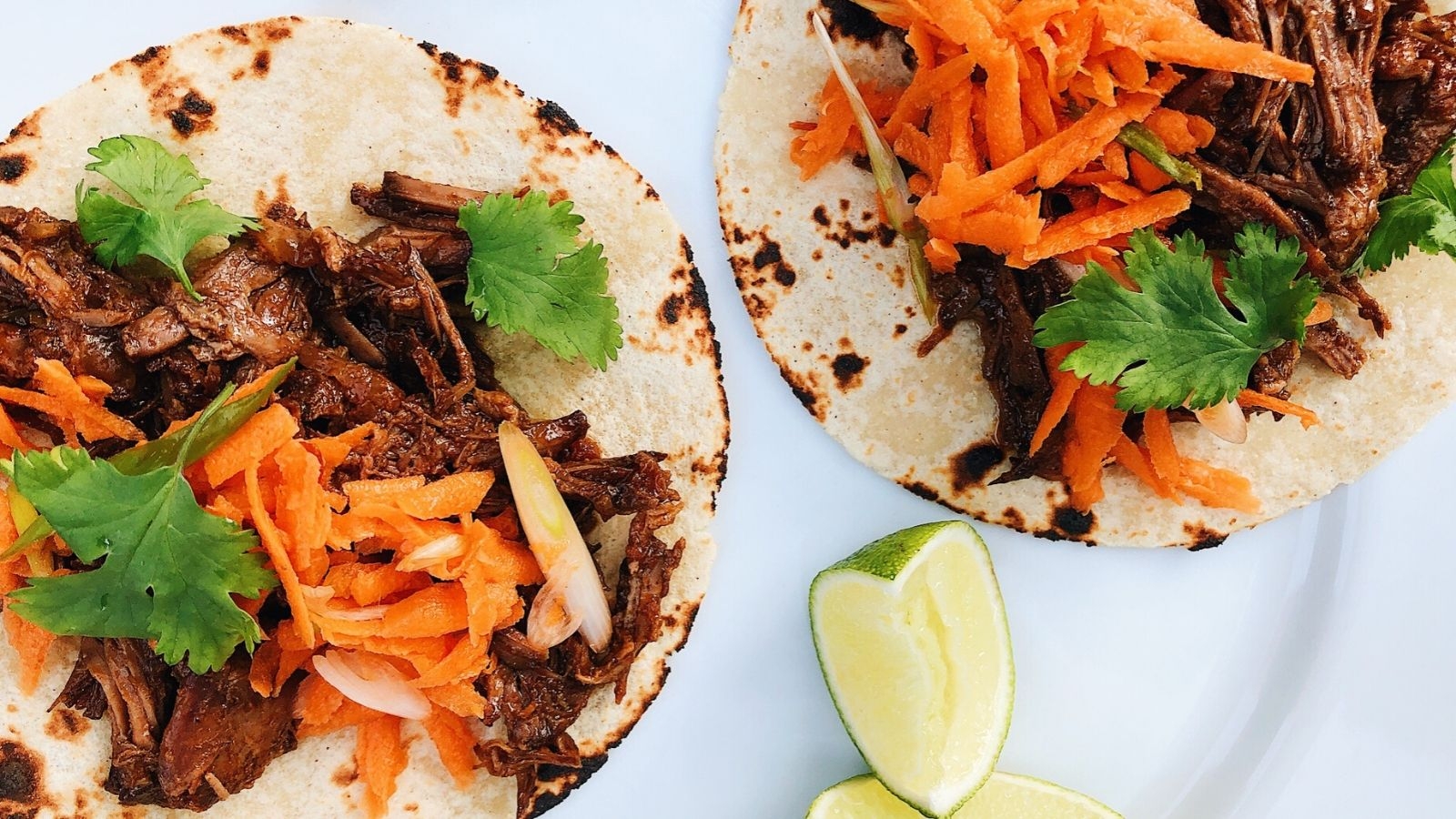 This recipe originally appeared on The Nosher.

When I was growing up, I knew brisket as an island of meat in a sea of sweet brownish-red sauce with carrot-plank buoys. Every holiday, this was plunked in the center of the table alongside a loaf of bread. It was … fine. But nothing to write home about.

Whoever hosted the meal would lament about how the meat had been in the oven for hours as they sawed through the roast. I couldn’t help but think “all that time for this?”

As I sliced through the brisket, I imagined all the ways it could be improved upon: more salt, always, maybe a bit of heat to break up all this fat, and some acid, too, to balance out the sweetness of the sauce. And why such thick slices of brisket? Brisket is a tough cut of meat, but if braised in well-seasoned liquid long enough, it can go so tender it practically shreds itself when nudged with a fork.

I’ll be honest, all I want to do with shredded meat is wrap it inside a warm corn tortilla with a big squeeze of lime. This summer, I dare you to leave the giant platter of meat for the winter months and embrace the warming weather with braised brisket tacos.

A note on carrots: You’ll find none in this pot of brisket. When cooked to oblivion along with the meat, carrots become mush. But a crunchy, tangy raw carrot slaw served alongside the meat breathes new life into the familiar flavors.

My great-aunt probably wouldn’t stand for it, but I say that once you’re changing one thing, why not just lean into some tweaks that speak to you? Personally, I don’t miss the original at all when this is on the table.

1 head garlic, halved crosswise (no need to get rid of the skin)

1. Season the brisket all over with salt and pepper at least 1 hour at room temperature (or overnight in the fridge, then returned to room temperature before searing). Preheat the oven to 325 F. Heat oil in a large Dutch oven over medium-high heat, then sear the brisket fat-side down until well-browned, about 4-5 minutes per side. Transfer to a cutting board or plate. Pour out all but 2 tablespoons fat.

2. In a small bowl, dissolve sugar or honey in apple cider vinegar and set aside.

3. Add onions and garlic to the pot and cook, stirring occasionally, until they take on some color, about 4 minutes. Stir in paprika, chile powder and tomato paste, and cook until the spices are fragrant and the tomato paste turns brick red, about 1 minute. Stir in the vinegar mixture, tomatoes and broth, then bring to a boil. Season with a big pinch of salt. Let the mixture reduce for 5 minutes, then return the brisket to the pot, fat-side up.

4. Cover the pot and transfer to the oven. Bake, removing the pot from the oven and spooning some of the liquid over the meat every 40 minutes or so, until the meat easily shreds when you pull at it with a fork, 3 to 3 1/2 hours.

5. Remove pot from the oven and carefully skim off as much rendered fat as you can from the surface of the mixture. Discard fat. Uncover the pot and let cook for an additional 15 minutes. Let cool, then skim fat again. Skim fat every 15 minutes until you’re ready to serve, then use 2 forks to shred the meat and coat entirely in the surrounding sauce. The onions and garlic will have essentially melted into the sauce, but if you spy whole cloves of garlic, give them a smash to incorporate. (Alternatively, remove pot without skimming fat, let the mixture cool to room temperature and refrigerate overnight, covered. The following day, scoop off solidified fat from the surface and return to the oven at 325 F. Discard fat. Cover and reheat for 1 hour, then shred meat.)

6. To make the slaw, combine lime juice, honey and red pepper flakes in a large bowl and season with salt and pepper. Let sit for at least 15 minutes or up to 1 hour. Toss in carrots and scallions. Season with more salt and pepper to taste. Serve brisket with warmed tortillas, slaw and desired taco fixings. Serves 6-8.