Short on time, Yad Vashem packing emotion into Trump visit with story of one young victim 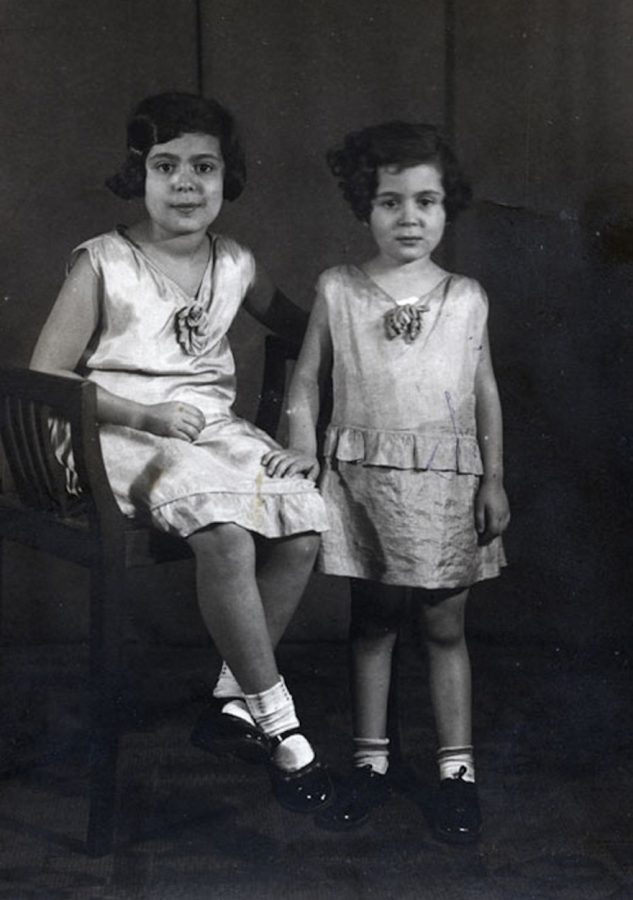 Ester Goldstein, left, and sister Margot lived in Berlin before they were separated in 1939. Photo courtesy of Yad Vashem

Andrew Tobin
JERUSALEM (JTA) — President Donald Trump will spend just 30 minutes at Yad Vashem on the second and last day of his visit to Israel, but the leadership of the Holocaust memorial center in Jerusalem plans to use the brief time to deliver a powerful message.

Rather than bombarding Trump with facts or analysis, they will tell him the story of one German Jewish girl, Ester Goldstein, who was murdered by the Nazis.

“The story of a child touches everyone, not only the president,” Yona Kobo, researcher of online exhibitions at Yad Vashem, told JTA. “Ester and her friends were so fragile and naive and sweet. They were also very intelligent and mature, and rooted in Jewish customs, like respecting your mother and father.”

During his Tuesday afternoon stop at Yad Vashem, Trump will be presented with a replica of a personal album that belonged to Ester. While most of the Jews who contributed photographs and handwritten messages were killed in the Holocaust, Ester’s older sister, Margot Herschenbaum, 91, is still alive and will meet the president.

The first entry in Ester’s album is from 1937, when she was 11, and the final one is dated Sept. 16, 1942, about a month before she was killed at 16 in the ghetto of Riga, Latvia. One of the final entries, by a 16-year-old classmate, reads “Love life, and don’t be afraid of death. Believe in God and a better future.”

Ester’s parents and younger brother were killed in Nazi death camps. But Herschenbaum was rescued by a Kindertransport operation to Australia in June 1939, when she was 9. After the war she moved to the United States, where she was sent Ester’s album. She later donated it to Yad Vashem’s collection of 30,000 such artifacts.

“I was deeply moved when I heard that Yad Vashem decided to present a replica of my sister’s personal album to the President of the United States, Mr. Donald Trump,” Herschenbaum wrote in an email to JTA. “I always wanted to ensure that the memory of Ester and the fate of my family would never be forgotten. This is the reason that I chose to donate the album to Yad Vashem.”

“I hope that the President will appreciate the uniqueness of this item and realize its true meaning.”

Trump has received a crash course in the Holocaust since entering politics two years ago. During the campaign, many Jewish groups were critical of his campaign messages — like “America first” and conspiratorial talk of “global special interests” that seemed to echo historical anti-Semitic themes. As president, his White House issued a statement on International Holocaust Remembrance Day that failed to mention the Jews, and Sean Spicer, his press secretary, said that Adolf Hilter had not used chemical weapons during World War II.

Spicer quickly apologized for the comment, which he made in an effort to emphasize the barbarism of Syrian President Bashar Assad, but Trump never directly addressed criticism of his actions, much of which came from Jewish groups.

The president seems to have learned his lesson. During the annual Days of Remembrance, he spoke specifically of the Holocaust’s toll on Jews, who were the singular targets of the genocide. But he caused another controversy in Israel when it was reported that he was looking to cut his already short visit to Yad Vashem to 30 minutes.

The visit is near obligatory for foreign dignitaries. Barack Obama spent an hour at the memorial center as president, and George Bush took even longer.

Trump and first lady Melania Trump will visit Yad Vashem along with Israeli Prime Minister Benjamin Netanyahu and his wife, Sara. Trump will rekindle the eternal flame and lay a wreath on a stone slab that marks ashes from those killed in death camps. A cantor will sing a version of the “El Maleh Rachamim” prayer for the souls of the victims of the Holocaust, and Trump will be invited to sign the Yad Vashem guest book.

“Although Trump is coming for a very short visit to Yad Vashem, he’ll pay his respects to the victims,” Kobo said. “We have to see the glass as half full. We hope he’ll come again and we’ll show him more of Yad Vashem and more of Israel.”

She said the aim of focusing the visit on Ester — just one of the 1.5 million children among the 6 million killed — is to convey the human toll of the Holocaust that can be lost in the numbers. There are reasons to think the approach could work with Trump.

According to reports in the U.S. media, he has little patience for long briefings but can be moved by emotion. For example, his decision to fire 59 missiles at a Syrian army airfield apparently was motivated largely by video of children and adults being killed in a chemical weapons attack.

But Kobo, who contacted Herschenbaum to attend the ceremony, said Trump is not the only — or even the main — target audience. She hopes the president’s visit will introduce some people to the Holocaust who would never otherwise hear about it, including anti-Semites of all political stripes.

“We’re trying to reach as many people as possible and educate them about this Jewish and human tragedy,” she said. “The Holocaust isn’t a single story but many stories. And if you hear about them one by one, you can build yourself a bigger picture and being to understand how what so many different people in some many different countries went through.”