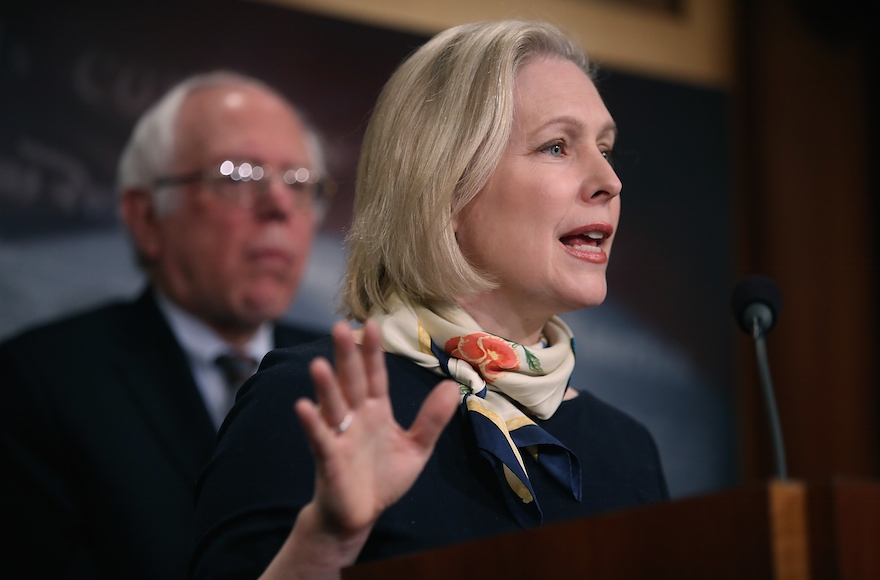 WASHINGTON (JTA) — In a rare move and after facing criticism at town hall meetings, Sen. Kirsten Gillibrand, a New York Democrat, withdrew her sponsorship of an anti-BDS bill.

A search of the congressional website on Wednesday showed that Gillibrand withdrew her sponsorship. Asked for comment, her spokesman referred to her comments earlier this week at a town hall meeting in Queens in which she said she was withdrawing support for the measure and seeking a modification of the bill to address civil liberties concerns.

“I’m going to urge them to rewrite it to make sure it says specifically this does not apply to individuals,” Gillibrand said at the time, describing her reactions after a meeting with the American Civil Liberties Union, which had objected to the bill.

Gillibrand said her principal concern was that the bill could conceivably target individuals who participate in the movement to boycott, divest from and sanction Israel.

“This is only applying to companies,” she said. “This applies to those working to undermine foreign policy. It has to be very specific that someone who is in favor of BDS can speak their mind and somebody who is against BDS can speak their mind, but you are always allowed to speak your mind. So I’m going to try and get the bill revised so there’s no ambiguity, that it’s just an extension of this foreign policy, which I think does make sense.”

Activists at multiple town halls had confronted Gillibrand over her support for the bill. Some of the questions were organized by Jewish Voice for Peace, which backs BDS, and the U.S. Campaign for Palestinian Rights, among other groups.

Critics, including the ACLU, say the bill, which expands 1970s era laws targeting the Arab League boycott to include boycotts initiated by international organizations, would inhibit free speech. Another objection from the left is that the bill encompasses boycotts of settlement goods.

Defenders of the bill say its ambit is narrow, and that it only addresses active cooperation with boycotts initiated by foreign governments and international organizations, and would not extend to general declarations of intent to boycott Israel or its settlements.

Most recently, Amnesty International has come out against the bill.

The bill, introduced by Sen. Ben Cardin, D-Md., is co-sponsored by nearly half the Senate. A similar bill is under consideration in the U.S. House of Representatives.