Rod Rosenstein: 5 things to know about the man who helped get Comey fired 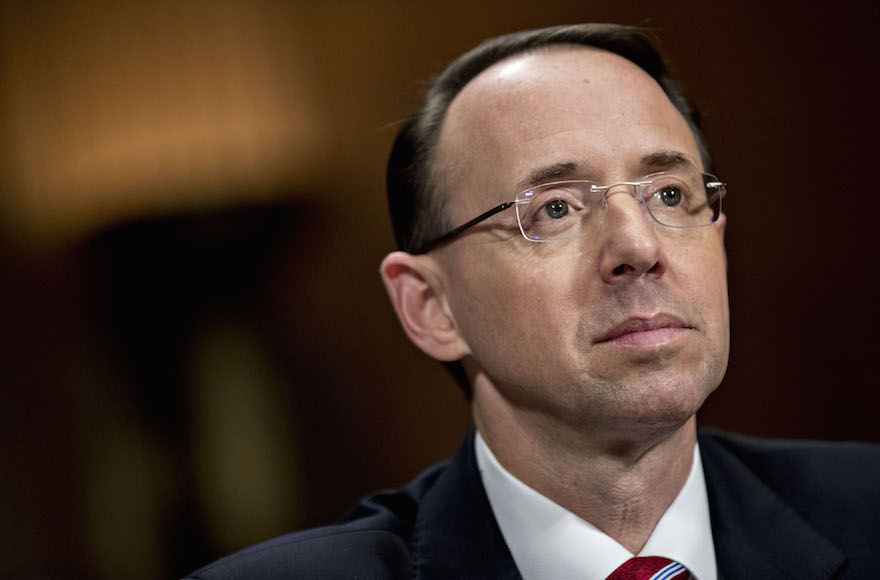 Rod Rosenstein, deputy attorney general nominee for U.S. President Donald Trump, listens during a Senate Judiciary Committee confirmation hearing in Washington, D.C., U.S., on Tuesday, March 7, 2017. The confirmation hearing for Rosenstein began with Republicans and Democrats squaring off over who should lead probes into Russian interference in the 2016 presidential election and potential contacts between Moscow and Trumps campaign team. Photographer: Andrew Harrer/Bloomberg

Ben Sales
(JTA) — Until this year, Rod Rosenstein was an unassuming U.S. attorney with a reputation for fairness.

Now he’s at the center of the controversy over President Donald Trump’s snap firing of James Comey, the FBI director.

Rosenstein, 52, whose appointment by Trump as deputy attorney general was confirmed only two weeks ago, wrote the memo outlining concerns with Comey’s performance, mostly related to his handling of the Hillary Clinton email investigation. Based on the memo, said the White House, Trump decided to fire Comey, delivering the surprise decision last night.

The move puts Rosenstein in a difficult position: He is the Justice Department official overseeing the FBI investigation of Russian involvement in Trump’s presidential campaign that Comey was leading. Pundits are questioning the timing of the memo, as well as asking whether it was drafted to provide cover to what was a foregone conclusion to oust Comey.

So who is Rosenstein? Here’s where he came from, his Jewish ties and what people are saying about him now.

Rosenstein was respected as a skilled, by-the-book government lawyer.

Before ascending to the deputy attorney general post, Rosenstein spent more than a decade serving as a U.S. attorney in Maryland. He is politically conservative and was appointed by President George W. Bush. But when Barack Obama took office, Rosenstein was one of only three U.S. attorneys among 93 to be kept on the job by the new president.

As U.S. attorney, Rosenstein led successful prosecutions for leaks of classified information, corruption, murders and burglaries. He was particularly effective taking on corruption within police departments, according to an essay in Vox by Thiru Vignarajah, a former colleague.

“Over his first decade as the lead federal prosecutor in Maryland, murders statewide were cut by a third, double the decline at the national level. Other violent offenses like robberies and aggravated assaults also fell faster than the national average,” he wrote.

The Senate voted 94-6 to confirm Rosenstein to his new post.

He played a key role investigating Bill and Hillary Clinton.

Comey was allegedly fired for mishandling his investigation of Hillary Clinton. If that’s true, he may have learned from Rosenstein, who was praised for his own Clinton probe two decades ago.

In 1995, Rosenstein joined the team of lawyers investigating the Whitewater scandal, which involved allegations of illegal real estate dealings by the Clintons. The allegations against the Clintons were ultimately unproven, but they led to the exposure of the Monica Lewinsky scandal and President Clinton’s subsequent impeachment.

Rosenstein headed one of the few successful Whitewater prosecutions, which led to the conviction of former Arkansas Gov. Jim Guy Tucker and Clinton associates James and Susan McDougal. He questioned Hillary Clinton at the White House in 1998 as part of a separate case, according to the Baltimore Sun, but she was never implicated.

He graduated from Penn and Harvard — and he’s a family man.

Rosenstein grew up in the upscale Philadelphia suburb of Huntingdon Valley. He’s a 1982 graduate of the public high school and earned a merit scholarship to the University of Pennsylvania’s prestigious Wharton School of Business — also Trump’s alma mater. He later attended Harvard Law School, joining the conservative Federalist Society, which gave him a Distinguished Alumni Award in 2006.

Rosenstein is married to Lisa Barsoomian, who also served as a U.S. attorney. The couple have two daughters, 17  and 15, and live in the Washington, D.C., suburb of Bethesda, Maryland. While Rosenstein works late nights, the Sun reported that he would often go bicycling with the family on Sundays.

He used to play sports at the local JCC.

Not much surfaces about Rosenstein’s Jewish involvement online, but he has been affiliated with Jewish institutions in the past. He was a member of Bethesda’s Reform Temple Sinai from 2008 to 2014, and of the U.S. Holocaust Memorial Museum from 2001 to 2011.

According to a questionnaire he filled out ahead of his Senate Judiciary Committee hearing this year, Rosenstein also was a member of a “Jewish Community Center Sports League” from 1993 to 2012.

Which JCC? Which sport? An ongoing JTA investigation has yet to uncover the answer.

He wrote a damning letter against Comey — but never explicitly recommended firing him.

Rosenstein didn’t hold back in a 1,000-word letter delineating Comey’s missteps. He lambasted Comey both for his July statement that Hillary Clinton would not face indictment and for Comey’s Oct. 28 letter announcing the reopening of the Clinton investigation.

“I cannot defend the Director’s handling of the conclusion of the investigation of Secretary Clinton’s emails, and I do not understand his refusal to accept the nearly universal judgment that he was mistaken,” Rosenstein wrote. “Almost everyone agrees that the Director made serious mistakes.”

But the evisceration stops just short of calling for Comey to be canned. Rosenstein does write that “the FBI is unlikely to regain public and congressional trust until it has a Director who understands the gravity of the mistakes and pledges never to repeat them. Having refused to admit his errors, the Director cannot be expected to implement the necessary corrective actions.”

But just before that, he cautioned, “Although the President has the power to remove an FBI director, the decision should not be taken lightly.” The memorandum is dated Tuesday, May 9.

Trump read Rosenstein’s letter and made the decision.