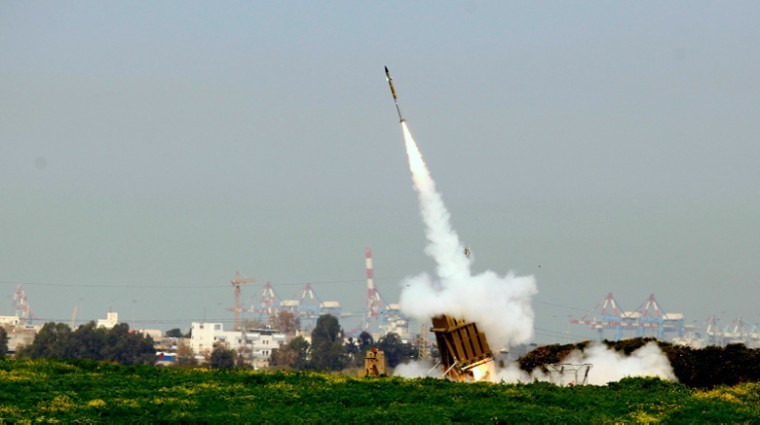 Israel's Iron Dome defense system near the Israeli town of Ashdod has intercepted a volley of rockets fired by terrorist groups from the Gaza Strip area, March 11, 2012.

JERUSALEM — At least two dozen rockets were fired from Gaza into Israel on the fourth day of attacks on Israel’s southern border.

Israel’s Iron Dome missile defense system intercepted at least eight of the rockets fired at Beersheba and five fired at Ashdod by Monday afternoon. More than 200 rockets have been fired at Israel since Israel assassinated a terrorist leader from the Popular Resistance Committee who the military says was planning an attack on Israel through the Sinai.

One rocket fired Monday struck an empty kindergarten building, a day after a rocket landed in a school courtyard. At least eight Israelis have been injured, two seriously.

Also Monday, rockets fired from Gaza struck the Kerem Shalom crossing between Israel and Gaza, which has remained open throughout the hostilities. The crossing was closed for about half an hour before operations were continued. A truck and a van on their way to deliver goods to Gaza were hit, according to a statement by the Coordinator of Government Activities in the Territories.

“Despite the continuous barrage of mortars and artillery shells from the Hamas-run Gaza Strip, the IDF and COGAT continue to honor Israel’s commitments to transfer goods through the Kerem Shalom crossing to the people of Gaza in an efficient and secure manner,” the statement said.

Schools were closed for a second day on Monday in cities and towns located up to 25 miles from the Gaza border, affecting about 200,000 children.