A rocket scientist who helped design Israel’s missile defense system might not normally share a stage with an Australian-born Talmud scholar and a prominent Russian TV game show contestant.

It took the global coronavirus pandemic to bring all three together recently over Zoom — along with seven other presenters — in the biggest online festival ever for Limmud FSU, a nonprofit international Jewish education organization for Russian-speaking Jews all over the world.

The May 3 event, called Limmud FSU North America eFest, was geared toward North Americans, but it attracted an audience of more than 500 viewers on three continents and featured 10 sessions in Russian and English.

“Limmud is stronger than any coronavirus,” said Ksenia Svetlova, a Russian-language TV analyst and former Israeli Knesset member. “I’m very happy this event is taking place so we can have a civilized debate about things that are important to Jews in the Diaspora.”

Svetlova appeared onscreen opposite Yishai Fleisher, spokesman for the Jewish community of Hebron, for a lively panel discussion titled “Between the Two-State Solution and Sovereignty.”

“You can be uncertain about life, especially in these times, but one thing we have to remain certain about is that God believes in us,” Becher said. “This is the fourth time I’ve spoken at a Limmud event, and God willing next time it’ll be in person. Virtual hugs to everyone.”

Sunday’s online event took place in lieu of a pair of in-person annual conferences that had been a fixture of Limmud FSU in North America since 2009. This year’s gatherings had been scheduled for March 27-29 in Toronto and May 15-17 in Parsippany, New Jersey. But in early March, when the rapidly spreading coronavirus pandemic forced their postponement, organizers immediately began exploring alternatives.

“The idea was that if we were going to do this virtually, it had to be unique,” said Elman Isakov, co-chair of the 2020 New York event. “There’s so much popping up on Zoom, so we decided to make it predominantly Russian and focus on celebrity speakers.”

In fact, since the outbreak of the pandemic, Limmud FSU festival organizing committees across the globe have been quick to shift activities online, organizing lectures, discussions and virtual social gatherings. During the past month, dozens of online activities were held by teams from Israel, Ukraine, Belarus, Moldova, Russia and Western Europe, with hundreds of participants at most sessions. 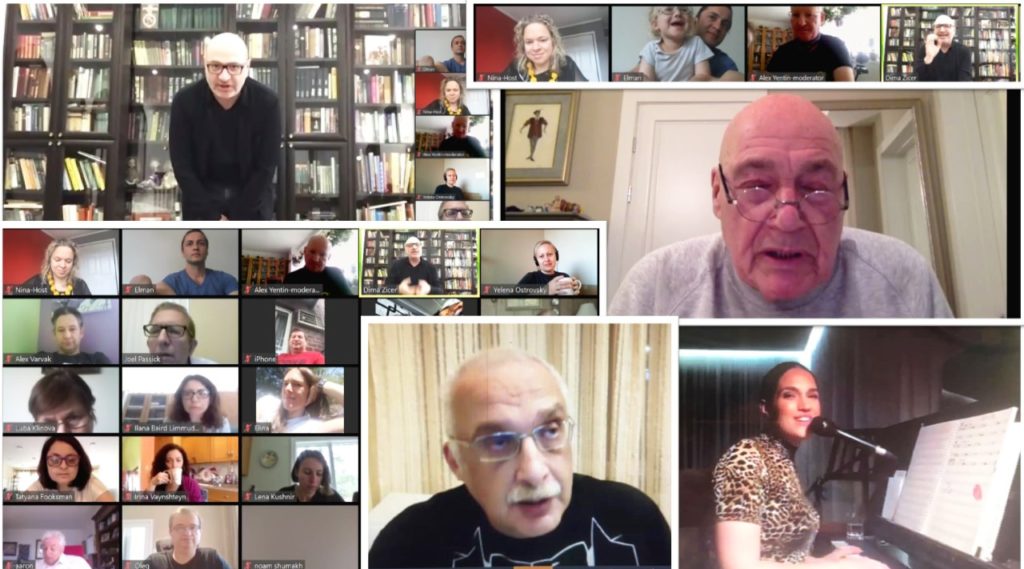 The Limmud FSU North America eFest on May 3, 2020 attracted an audience of more than 500 viewers on three continents. (Courtesy of Limmud FSU)

The four-hour program ended with the playing of a popular Soviet-era game — “Chto? Gde? Kogda?” (What? Where? When?) — together with one of the most prominent contestants of the game, Alexander Drouz, and a live piano concert from Tel Aviv by Ukrainian-born Israeli singer-songwriter and actress Marina Maximilian.

“We felt this was our opportunity to get people’s minds off the virus, because it seems that’s what everybody is talking about, all day long,” said  Alina Bitel, a native of Odessa who has lived in New York for 26 years and is the chair of Limmud FSU New York.

Usually, conferences of such sizes are staffed by dozens of professionals who plan for months, Bitel noted. The May 3 event was put together largely by volunteers. It was organized by three Limmud FSU teams working together — from New York, the West Coast and Canada — with assistance from US project manager Noam Shumakh-Khaimov, Canada country director Mila Voihanski and Limmud North America. Viewers, who paid a symbolic fee of $18/36 to participate, came from the United States, Canada, Russia, Israel, Belarus, Germany, Britain, Israel, Moldova, Australia, Lithuania, Austria and elsewhere.

The effort was replete with challenges — including making sure people who didn’t behave properly could be removed from the virtual conference. On the plus side, Bitel said, “We were able to bring the kinds of presenters that we haven’t been able to get to a non-virtual meeting, because right now they have nowhere else to go.”

Nina Faynberg, the New York event’s co-chair, moved to Brooklyn from Moscow in 2016 with her husband and son. She noted that the political and religious divisions often on display in the American Jewish community are absent from Limmud FSU.

“We want everyone to come together as a community and enjoy the festival,” Faynberg said.

Alex Katz, a Toronto accountant originally from Kyiv, Ukraine, got involved with Limmud FSU in Canada five years ago, after attending his first Limmud FSU conference in New York.

“Right away, I fell in love with the whole concept and the diversity of speakers and views, where everybody is coming together no matter where on the religious spectrum they are,” said Katz, 46, who considers himself modern Orthodox.

Canada is home to tens of thousands of Russian-speaking Jews, many of whom were born in the Soviet Union, made Aliyah to Israel, and later moved to Canada, according to Galit Baram, Israel’s consul general in Toronto and Western Canada.

“It’s important to us as Israeli diplomats to maintain relations with them — and to make sure they know Israel will always be their home away from home,” said Baram, who traces her own roots to Belarus. “This initiative of Limmud creates the exact framework we need in order to do just that.”

Additional events are being planned for May and June; local initiatives will be supplemented by a series of online discussions organized by Limmud FSU International. In the first session in a series, scheduled for May 10, Frenkel and judge Elyakim Rubinstein, deputy president of Israel’s Supreme Court, will talk to the chair of Yad Vashem, Rabbi Israel Meir Lau, on the subject of the Jewish people and the increase in anti-Semitism during the Covid-19 pandemic.

Harry Rosenbaum, honorary chairman of Limmud FSU Canada, said these kinds of programs are important because they unite Jews at a particularly chaotic, stressful time worldwide.

“My wife and I were both born in postwar Europe to Holocaust survivors,” he said. “We share many experiences and parallels with the participants and members of Limmud FSU. The Jewish community gives us our identity and a place of belonging, and this event provides the opportunity to share thoughts and engage in essential dialogue.