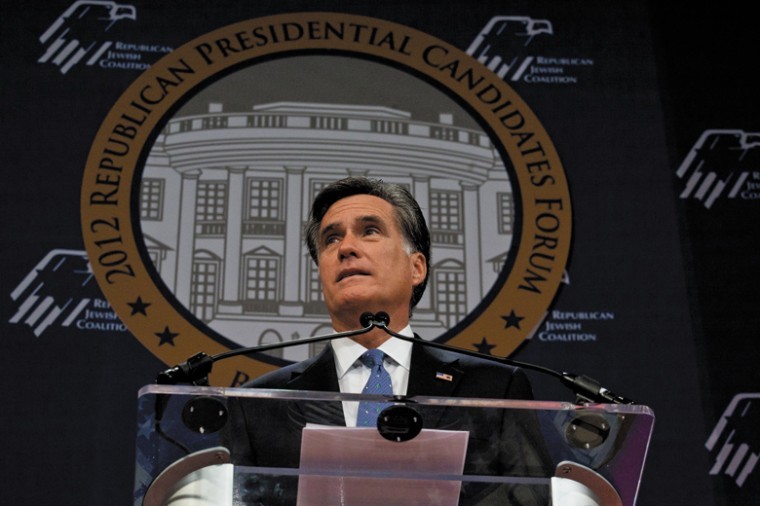 Iran’s nuclear program appears to be racing ahead. The Middle East peace process is in shambles. And a series of recent flare-ups have highlighted ongoing tensions between the Obama administration and elements of the pro-Israel community.

It was against this backdrop that six Republican candidates took the stage Dec. 7 at the Republican Jewish Coalition’s presidential candidates forum. The hopefuls took turns laying out their lines of attack against President Obama, offering a preview of how Middle East issues might play out in a general election battle.

The daylong event attracted hundreds of Republican Jews to the Ronald Reagan Building and International Trade Center here. They heard from the top GOP contenders with the exception of Rep. Ron Paul of Texas, who was not invited. (The RJC’s executive director, Matthew Brooks, cited the congressman’s “misguided and extreme views” as the reason for his exclusion.)

With less than a month to go until the Iowa caucuses, the current leaders of the GOP pack, Newt Gingrich and Mitt Romney, appeared to cement their status as favorites of Jewish Republicans, both receiving warm receptions and ample applause.

While the candidates touched on economic issues, most avoided addressing the social issues, such as abortion and religion, that tend to push Jewish voters away from Republicans.

Instead, their comments focused heavily on foreign policy, with each assailing the Obama administration for its policies toward Israel and Iran, and vowing that they would be better friends to the Jewish state and tougher foes for the Islamic Republic.

Former Pennsylvania Sen. Rick Santorum led off the forum by introducing a theme that the front-runners would echo.

“The president, for every thug and hooligan, for every radical Islamist, has had nothing but appeasement,” Santorum said.

Later in the day, Romney accused Obama of an “appeasement strategy” toward America’s rivals and enemies, while Gingrich said he was “very, very worried about our entire relationship with radical Islam,” saying it is based on self-deception and appeasement.

In response to a reporter’s question, Obama fired back the next day.

“Ask Osama bin Laden and the 22 out of 30 top al-Qaida leaders who have been taken off the field whether I engage in appeasement,” the president said.

Gingrich and Romney both placed their criticisms of Obama’s Israel policies within the context of broader foreign policy critiques.

Gingrich said the U.S. needs “a dramatically rethought strategy for the Middle East” and that the country is engaged in a “long struggle with radical Islamists.” The former House speaker took aim at recent remarks by Defense Secretary Leon Panetta, who urged Israel to “mend fences” with its neighbors.

“This one-sided continuing pressure that says it’s always Israel’s fault no matter how bad the other side is has to stop,” Gingrich said.

Romney accused the president of having “rushed to apologize for America, but he has hesitated to speak up for democracy and freedom.” The former Massachusetts governor depicted Israel as a case in point.

Obama “has immeasurably set back the prospect of peace in the Middle East,” Romney said, and his administration’s policies have only “emboldened Palestinian hard-liners” who feel that “they can bypass Israel at the bargaining table.”

Texas Gov. Rick Perry said that Obama “has insisted on previously unheard-of preconditions for Israel, such as an immediate stop to all settlement activity.” Perry said he supports “the goal of a Palestinian state, but it should be the Palestinians who meet certain pre-conditions.”

Perry’s pre-conditions closely resemble positions previously articulated by Obama. The president has condemned Palestinian efforts to achieve statehood outside of the context of negotiations, called previous Hamas-Fatah unity efforts “an enormous obstacle to peace” and said Israel should be “a Jewish state and the homeland for the Jewish people.”

The candidates talked tough on Iran – and had some tough words for the Obama administration.

“On Iran, the only rational long-term policy is regime replacement,” Gingrich said in response to a question from an audience member. He called for covert action to sabotage Iran’s gasoline supply and said the U.S. should fund Iranian dissident groups.

Regarding the country’s nuclear program, Gingrich said, “It’s better to stop them early than to stop them late.”

Perry warned that Obama’s “failed policy of outreach to Tehran” has left the U.S. “with only two options: a military strike or a nuclear Iran.”

Romney called for keeping the threat of military action on the table while pursuing sanctions.

“We should make it very clear that we are developing, and have developed, military options,” Romney said in response to a question. “Nothing concentrates the mind like suffering from sanctions and seeing a military option. It is unacceptable for the U.S. to endure an Iran with a nuclear weapon.”

Presidential candidates regularly promise to move the U.S. embassy in Israel from Tel Aviv to Jerusalem. Back in 1999, then-candidate George W. Bush told an RJC gathering that he would move the embassy, but he never followed through as president.

At the RJC forum, Gingrich reiterated his pledge – made in a June speech to the RJC – to move the embassy to Jerusalem. But it was Rep. Michelle Bachmann of Minnesota who took that promise into uncharted territory with her unconventional proposal to help finance the move.

“I already have secured from a donor who said they will personally pay for the ambassador’s home to be moved from Tel Aviv to Jerusalem,” Bachmann said.

Gingrich offered some red meat to the foreign policy hawks in the house and made the only real news of the night when he said that he would offer the job of secretary of state to former American diplomat John Bolton.

Bolton served for less than a year as U.S. ambassador to the United Nations during the second Bush administration as a recess appointment. Known for his confrontational style, Bolton is a favorite of conservatives who take a dim view of multilateral institutions such as the U.N. but a pariah to liberals who see him as an undiplomatic diplomat.

Bolton, who has not yet endorsed a candidate, later called the offer “very flattering” but did not say whether he would accept the job in a Gingrich administration.

One issue mostly missing from the RJC forum was aid to Israel.

The issue became a campaign flash point after Perry said at a debate that all U.S. aid allotments to foreign countries should start at zero and be considered anew each year, and Gingrich and Romney immediately agreed.

Asked at the debate whether his framework also would apply to Israel, Perry answered that it would, though he stressed that Israel would likely continue to receive funding at a “high level.”

Even the RJC had expressed concern over Perry’s formulation, warning in a Twitter post that it contradicts a previous memorandum of understanding between the two countries.

For weeks, leading Jewish Democrats have been highlighting the issue, accusing the Republican contenders of lacking commitment to American aid to Israel.

In an interview in advance of the forum, Brooks, the RJC’s executive director, expressed confidence that the candidates would “put to bed the political smears” from Democrats “that the leading Republicans want to cut aid to Israel.”

At the forum, Perry did address the issue head on, saying that “I am adamant that any discussion of foreign aid should start at zero. But let me be clear: Israel is our strategic ally. America long ago ended traditional foreign aid to Israel. Strategic defense aid to Israel will increase under a Perry administration.”

Yet the issue of aid was not mentioned by front-runners Gingrich and Romney – and Democrats pounced.

“I am deeply disappointed that Governor Romney refused to state whether he supports the [Memorandum of Understanding] between the U.S. and Israel in his address this morning to the Republican Jewish Coalition,” Rep. Steve Rothman (D-N.J.) said in a statement. “If Governor Romney isn’t willing to support Israel’s military and foreign aid package before an audience of pro-Israel, Republican Jews, many of us believe he simply doesn’t support it!”

However, in a follow-up interview, Brooks dismissed the controversy surrounding aid to Israel as nonsense.

“The only one who had a perception problem on foreign aid was Perry as a result of his comments at the debate,” Brooks said. “He laid that to rest unequivocally as predicted.”

While Jon Stewart of “The Daily Show” labeled the RJC’s event a “tuchus kiss-off” – and Democrats used the opportunity to accuse the Republican candidates of politicizing the U.S.-Israel relationship – the forum’s organizers said they were pleased with how things went.

“All of the candidates used the opportunity to demonstrate their strong pro-Israel credentials, their visions for how they want to lead America and provided a strong contrast between their visions and that of the failed policies of Barack Obama,” Brooks said.

But while the RJC forum garnered plenty of media attention, it did not yield much news. Instead the headlines – and sparks – over the Israeli-Palestinian issue came later in the week with the release of an interview that Gingrich did with The Jewish Channel.

In the interview, Gingrich labeled Palestinians as “an invented” people. After coming under criticism – including from Romney, who called his opponent’s comments “incendiary” – Gingrich said that he stood by his characterization but reaffirmed his support for a negotiated settlement including a Palestinian state.

(This article was produced in cooperation with The Washington Jewish Week.)