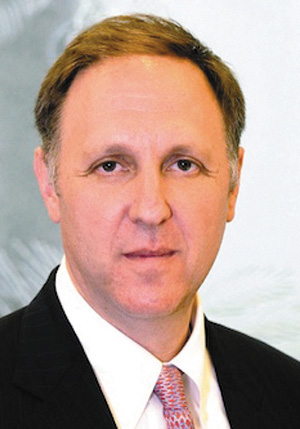 At its annual meeting this week, the organization’s board of directors debated for more than six hours the circumstances surrounding an anonymous letter sent to the conference in 2001 alleging that multiple false claims had been approved for restitution payments. Despite two investigations that year into the letter’s allegations, fraud was not detected. Claims Conference employee Semen Domnitser, who was implicated in the letter, was able to continue running his scheme until 2009, racking up more than $57 million in fraudulent payouts over 16 years. He was convicted at trial two months ago.

Faced with a public outcry following the revelation of this missed opportunity, a specially appointed Claims Conference committee commissioned an investigation into the 2001 episode. But the committee’s final report on the issue, sent to the board just before this week’s meeting in New York, proved highly controversial. It was disavowed by two of its four members and rebutted in a 21-page missive by the chief executive of the Claims Conference, Greg Schneider.

So after the lengthy debate, the board had a choice on Wednesday: Investigate further and possibly purge the organization of the remaining Claims Conference leaders associated with the failure, or move on.

The board chose to move on, albeit with added measures of caution.

It voted unanimously to endorse the Claims Conference slate of officers — including chairman Julius Berman, who as pro bono counsel oversaw one of the botched 2001 probes into the anonymous letter, and Schneider, who discovered the fraud four months after becoming chief executive in 2009.

The board also voted unanimously to endorse the special committee’s recommendations to form a new committee to review the administration, management and governance structure of the Claims Conference. But the board stopped short of endorsing the special committee’s controversial report or the ombudsman’s disputed findings, and it did not agree to any additional outside oversight, as some critics have demanded.

Though outsiders will be included on the new committee that is to review organizational governance, the committee will not have any power other than to issue a report and make recommendations to the board.

Essentially, the board reaffirmed a central tenet of how it operates the Claims Conference: Outside critics may complain and demand more of a say in how the billions of dollars in restitution money from Germany are handled and distributed, but ultimately the board will do what it wants.

As one critic of the process told JTA on condition of anonymity, it’s business as usual at the Claims Conference.

To some outside critics, this is unconscionable. In their view, heads should roll for the conference’s failure to detect a $57 million fraud. They point to the disputed ombudsman’s report, which found a “litany of lack of diligence, competence and judgment” among senior Claims Conference leaders for their handling of the 2001 episode. They complain that the organizations that comprise the board, formed in 1951 and little changed since, is unrepresentative of the current Jewish world, insufficiently transparent and uninterested in outside input. In their view there could not be a clearer need for change.

But Claims Conference leaders say that misses the point. Yes, they say, there were significant failures in 2001 — yet even the ombudsman’s report does not lay the blame on any one person and said there is no evidence that anyone tried to cover up the 2001 episode. It was the Claims Conference that discovered the fraud in 2009 and brought it to the authorities. All 31 people who perpetrated the fraud were arrested and convicted of their crimes.

And since 2009, new systems and controls were put into place to prevent recurrence of fraud, including two outside auditing firms — one of which reports to the Germans.

The staffers responsible for the failures in 2001 are gone from the Claims Conference – dead or retired. Though Berman played a role overseeing one of the failed 2001 probes and many outsiders called for his resignation, the board appears to endorse the view that Berman is not to blame and is better off at the board’s helm than off it. (Berman also is a member of the JTA board.)

“The plain truth is that there is one person to blame: the convicted criminal,” Schneider wrote in his letter to the board. “All the main players … missed it. And, I am sure that each regrets it. But, people are fallible.”

Perhaps most notably, in the years since the fraud was discovered, Claims Conference officials say, they have been able to maintain the confidence of the German government, which bore the full cost of the $57 million fraud. That confidence is evident in the successes Claims Conference negotiators have had with Germany since 2009, including getting more classes of survivors eligible for pensions and restitution payments, and dramatic increases in funding for home care for infirm survivors. Even though the number of survivors drawing restitution payments has dwindled as they have died, the total amount of restitution Germany provides actually has increased since 2009, Claims Conference officials note.

It’s unlikely that this will be enough to placate critics. If anything, the board’s decisions this week may amplify their calls for reform. But there’s little the critics can do about it.

The committee created by the board this week may recommend additional changes to how the Claims Conference operates, and it’s possible that some changes eventually will be adopted.

Ultimately, however, that will be up the board of the Claims Conference.  And as long as the Germans keep treating the Claims Conference as the sole representative of the Jewish people on restitution matters, those who have a problem with the way the organization operates – whether it’s the Israeli prime minister or a survivor living in Florida — won’t be able to do much more than kvetch.

Uriel Heilman is JTA’s managing editor, responsible for coordinating JTA’s editorial team. He re-joined JTA in 2007 after a stint doing independent reporting in Israel and the Arab world. Before that, he served as New York bureau chief of the Jerusalem Post. An award-winning journalist, he has served as JTA’s news editor and worked as a reporter for a variety of publications in the United States and in Israel.