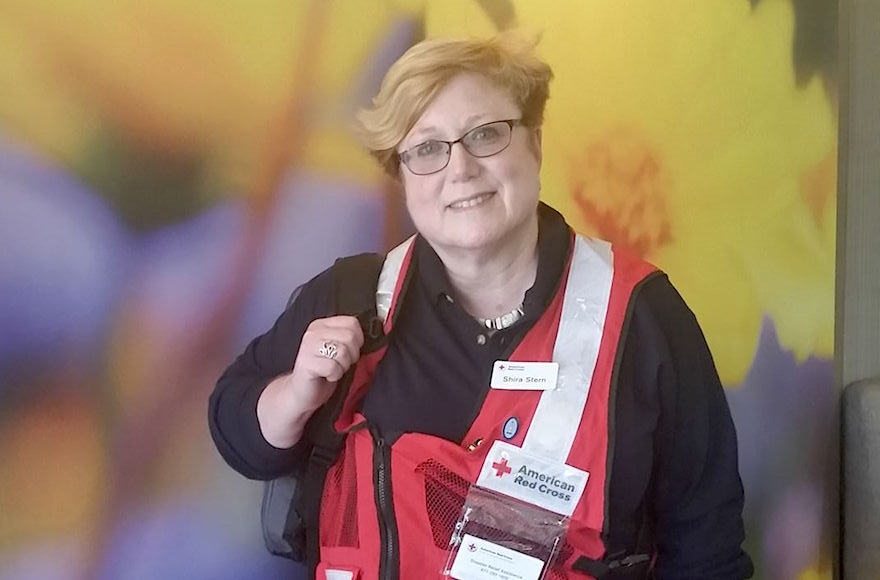 (JTA) — It was a day before Hurricane Harvey was due to make landfall, and Rabbi Shira Stern knew she was headed for Texas.

As a director of Disaster Spiritual Care for the American Red Cross, she knew that there would be people who would have other needs beyond shelter, beyond medical care, beyond a hot meal and a place to dry out. She met people just like them after floods devastated part of West Virgina in 2016, and when Superstorm Sandy pounded her own state, New Jersey, in 2012.

So after a circuitous two days of travel she found herself in Dallas, overseeing a team of chaplains in the shelters set up for families chased out of Houston by flooding that so far has claimed 46 lives and destroyed tens of thousands of homes and businesses.

She and her team of six volunteer chaplains help evacuees “access their own spiritual resources,” Stern said, speaking from the Kay Bailey Hutchinson Convention Center in Dallas, which has beds for as many as 5,000 people displaced by the storm. “We don’t impose [our faith] on anybody. We meet people who are very religious or not religious at all or just atheist. We listen to their stories and affirm what they have gone through.”

The clergy of all faiths are spiritual first responders, working with families as they arrive at shelters in Dallas and Fort Worth and partnering with local churches and faith-based organizations to do what Stern calls a “seamless carryover for continual care.”

“We are a crisis team, and during the long haul of rebuilding, Houston and Davenport and Beaumont and all these other places are going to need long-term care. In the process we are creating relationships with all of these faith-based groups.”

Spiritual care is perhaps a lesser-known facet of relief provided by the American Red Cross and other organizations on hand, including the Salvation Army and the National Guard. And it can discomfit some people, who worry that clergy are there to make converts among distraught people.

But Stern insists the work they do has nothing to do with proselytizing and everything to do with giving people only the tools and comfort they ask for. All of the chaplains sign the National Voluntary Organizations Active in Disaster guidelines, which means no proselytizing, no missionizing and no pushing their own faiths.

“Suppose someone says, as many do, ‘I am so distraught I want to die,’” said Stern. “The natural response is, ‘You don’t really mean that.’ Instead, we listen to that and we say, ‘tell me more.’ And by listening to the narrative we allow them to make sense of it and put it in its place, and at the same time we open the doors if they are inclined to open those doors and are inclined to enter the spiritual. We never say, ‘I will pray with you or pray for you.’ We say, ‘how can I be helpful?’”

So far 1,500 people have arrived at the convention center, most telling similar stories of wrecked homes, flooded highways and uncertainty about friends and loved ones. Around the state, about 42,000 people were housed overnight at shelters in Texas, the American Red Cross said Friday. Some can’t get in touch with family members, and some know people who have died.

“There are families that have been separated, not just husbands and wives and mothers and grandparents, but sometimes children and parents,” Stern said. “And we hear stories of agony, and when we get them together the potential tragedy turns into something wonderful. An eight-year-old was brought to a shelter an hour away and it took 36 hours for her parents to find her.”

Stern’s Disaster Spiritual Care team is part of a small army of spiritual and mental health professionals who are mobilizing for Harvey and its aftermath, as they’ve done in previous disasters. On the Jewish side alone, the Network of Jewish Human Service Agencies and the Jewish Family Service in Houston are launching an emergency support line to provide free telephone-based counseling. The Jewish Federations of North America sent a team of professionals to Houston to help its local federation and Jewish agencies locate community members, provide cash assistance and work with displaced families. Groups like Chabad and the NCSY Orthodox youth group are dispatching volunteers.

But Stern knows from experience that communities must also prepare for the long haul, that the trauma of surviving a disaster is “like a scar and remains in your soul.”

When she is not volunteering with the Red Cross, Stern is the rabbinic associate at Temple Rodeph Torah in Marlboro, New Jersey, and director of the Center for Pastoral Care and Counseling there. She plans on staying in Texas another week, before heading back and preparing for the High Holidays. “I can’t get out of the sermon just because I am here in Dallas,” she joked.

When she does head back, she’ll hand over her duties to another team of spiritual caregivers — who are already bracing for another storm, Hurricane Irma, that is gathering force over the Atlantic. She had nothing but the highest praise for her colleagues, who dropped everything and headed to Texas and who for their troubles receive only a food allowance and a place to sleep.

But Stern, who has performed bereavement counseling for 38 years, says she understands the spiritual rewards of this kind of work as well as the spiritual challenges.

“When people ask ‘Where is God in this?’ I tell them I try to find God in the people around me who are trying to help,” she said. “I never call these disasters ‘acts of God.’ I think that creates an immediate barrier between people and the Divine. I see God in — I don’t know why terrible things happen — but I do see God in the hands of the compassionate, giving individuals who up and leave their families and their work and whatever it is in order to come here and help people at the most critical crossroads of life.”