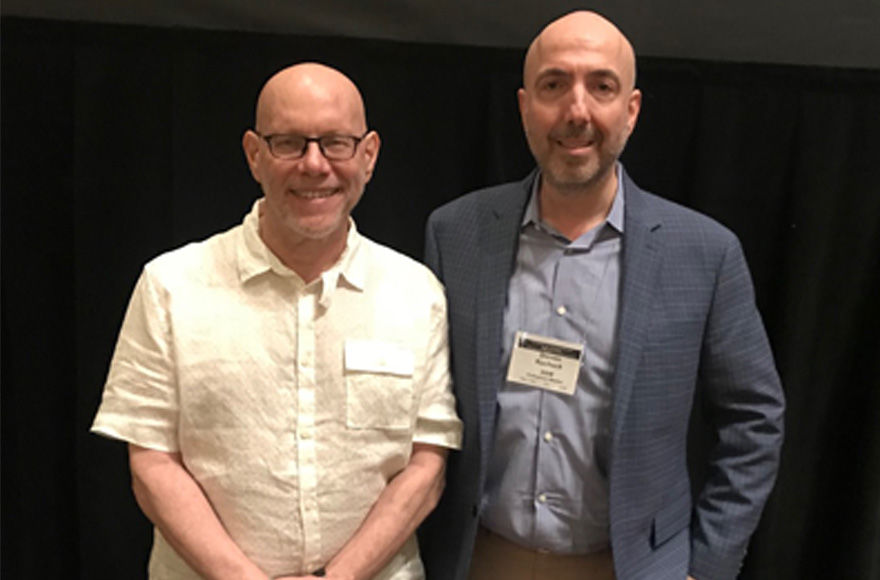 NEW YORK (JTA) — As its name suggests, relationships are key to members of the International Association of Relational Psychoanalysts and Psychotherapists.

But there is one relationship some members want to sever: the one between the organization and Israel.

At its 2018 conference, held June 14-17 at a Midtown Manhattan hotel, a vocal minority of the association’s 2,200 members objected to next year’s gathering being held in Tel Aviv, with some pledging to boycott it. The 100 people or so who attended a concurrent meeting in the same hotel titled Voices of Palestine suggested the objections aren’t marginal.

To be sure, the IARPP is a relatively small professional organization — it is dwarfed by the American Psychological Association’s nearly 116,000 members, for instance — but this marks the first time that boycotting Israel has become an issue outside of academic and church groups and the corporate world, according to people closely observing the Boycott, Divestment and Sanctions, or BDS, movement.

Backed by the pro-BDS group Jewish Voice for Peace, objectors and two dozen Palestinian mental health professionals, plus an Israel-based group called Psychoactive, sent letters to IARPP’s board asking that the conference location be changed. A petition made the same point.

Some communications asked that the conference be moved to Cyprus or Jordan. Another proposal was that it be held in Nazareth, an Arab city inside Israel proper, or on the border between eastern and western Jerusalem, so the conference would contribute to the Palestinian economy.

The IARPP declined to change the location from Tel Aviv.

“The Board engaged in an open and deliberative process before deciding to hold the conference in Israel,” Steven Kuchuck, IARPP’s president, wrote in a recent letter to members. “If we chose our conference locations by judging the political decisions of national governments, we might well have a hard time finding an ideal setting that would fit everyone’s preferences and values. To allow our organization to single out one country for a boycott would be to practice the politics of exclusion. Boycotts will not help us fulfill our central mission: promoting values that are integral to the creative development of relational psychoanalysis.”

Now those objecting to having a conference in Israel are accusing the relational psychology group of “silencing protests” and “responding like an arm of the Israeli government.”

Meeting in Israel is “implicit support of the Israeli government,” said Irwin Hoffman, a Chicago psychologist who is also a member of Jewish Voice for Peace. “The contention isn’t with every Israeli individual but proximity to dehumanizing I think genocidal behavior which makes it politically destructive for the organization” to meet there.

Hoffman, 75, has not visited Israel since he was in college and will not attend the conference in Tel Aviv. He would not be permitted in Israel, he says, because of his involvement with JVP. Having the conference there “normalizes Israeli business as usual,” he said.

“You wouldn’t have this meeting next to a concentration camp in Germany,” Hoffman said.

The topic of holding the conference in Israel has been heated since it was proposed over a year ago, according to Kuchuck, a psychotherapist and psychoanalyst in New York City.

“We can only have conferences in cities with a lot of IARPP members and active leadership,” he said.

Other conferences have taken place in Australia, Rome and Chile. Kuchuck said only Israel has been controversial.

Lewis Aron, IARPP’s founding president and the director of New York University’s postdoctoral program in psychotherapy and psychoanalysis, said “there aren’t a lot of objections to having it in the U.S. despite the Trump administration’s policies.”

Kuchuck said Israel’s IARPP chapter until recently was the second largest outside the United States with 160 members. Australia’s chapter now has 170 members.

The organization’s popularity in Israel is rooted by its people’s fondness for psychoanalysis and psychoanalytically oriented therapies, said Aron, offering that it was frequently said that immigrants to Israel arrived “from Europe with Marx in one hand and Freud in the other.”

“Analysts are active in the media, and a good number have columns and write for the general press,” he told JTA. “Analytic books commonly appear in the windows of bookstores.”

Israeli accents were heard virtually everywhere at the Roosevelt Hotel conference, which was titled “Hope and Dread: Therapists and Patients in an Uncertain World.” Israeli therapists spoke on many of the panel discussions and frequently asked questions as audience members.

The conflict was addressed directly and indirectly in a few of the sessions, including one on Sunday morning titled “Bridging a Sea of Fire.” Panelists included American Jewish and Israeli psychotherapists, as well as Manal abu Haq, who works in eastern Jerusalem and Ramla and has written about Israel’s founding as the Nakba, or “disaster,” and a “stubborn trauma” for Palestinians.

Some IARPP members are refusing to attend next year’s conference in an unofficial boycott.

Limor Kaufman, an Israeli therapist living and practicing in New York, told JTA that she knows colleagues who say they won’t go, though they are all engaged in “a productive, open dialogue” about it.

“I don’t support a boycott. It alienates the very people who need support, human rights workers and the people in favor of a two state solution,” she said.

“Most members of the Israel chapter are very liberal. There is also so much misinformation about the Israel-Palestinian conflict” among those favoring boycott, Kaufman said. “They think Israel is this humongous superpower. It’s hard to understand Israel’s vulnerability.”

Whether there will be a wider official boycott is not yet clear.

“It will depend to a large degree on what our Palestinian colleagues ask of us,” said an Israeli therapist in private practice in Tel Aviv who describes herself as an anti-occupation activist and BDS proponent. “We may attend and facilitate workshops on the occupation, or only come to the opening to relay the message from the Palestinian colleagues. This is not yet known.”

The therapist did not want to be named, saying it is dangerous to identify as a BDS activist in Israel.

“We want to protest the normalization of the occupation and the increasing violence happening now,” she said, referring to the number of Palestinians injured and killed during at times violent demonstrations at Gaza’s border with Israel.

The Voices on Palestine meeting held at the same time as the IARPP conference in the same hotel was organized by leaders of the U.S.-Palestine Mental Health Network. It attracted about 100 people, who filled a small conference room and overflowed into the hallway.

“IARPP tried to intimidate us and undermine our effort,” said Christine Schmidt, an IARPP member, psychoanalyst in Brooklyn and an organizer of the parallel gathering. “There is significant interest in talking about Palestinian human rights among IARPP members, and a lot of anger about the censorship and shutdown that have happened” at this year’s conference.

“People I know in Palestine have had family members murdered and have been forced to stand naked in the street,” said Elizabeth Berger, a child psychiatrist on the steering committee of the U.S.-Palestine Mental Health Network, who also organized the parallel gathering at the IARPP conference.

“These atrocities occur on a policy-based wide scale which is denied,” Berger, who is Jewish and not an IARPP member, told JTA. “There’s a whole world of clinicians who live in the Middle East and [BDS] activists who will be deprived of participation. It is for this reason that the State of Israel cannot be a platform for scholarly debate.”

The idea that those who oppose having the conference in Tel Aviv would not be permitted entry to Israel because of the Israeli government’s BDS blacklist is incorrect, said one expert.

“Everyone’s protesting that they’ll be barred. But I’ve had conversations with the ministry on this issue and it’s not members, it is leaders” of BDS advocacy groups who would be stopped, said Kenneth Waltzer, executive director of the Academic Engagement Network, an organization of university professors that opposes boycotts of Israel and advocates for academic freedom.

Co-chairs of the Tel Aviv conference next year already are starting to coordinate entry permits for mental health professionals from the West Bank and overseas who want to attend but might otherwise face difficulty, Kuchuck told JTA. There will also be pre-conference opportunities for participants to visit the West Bank and checkpoints and dialogue with Palestinians, he said.

The last time an IARPP conference was held in Israel was a decade ago and included similar activities.

“People went home with a much richer understanding of how complicated the situation there is,” Kuchuck said.