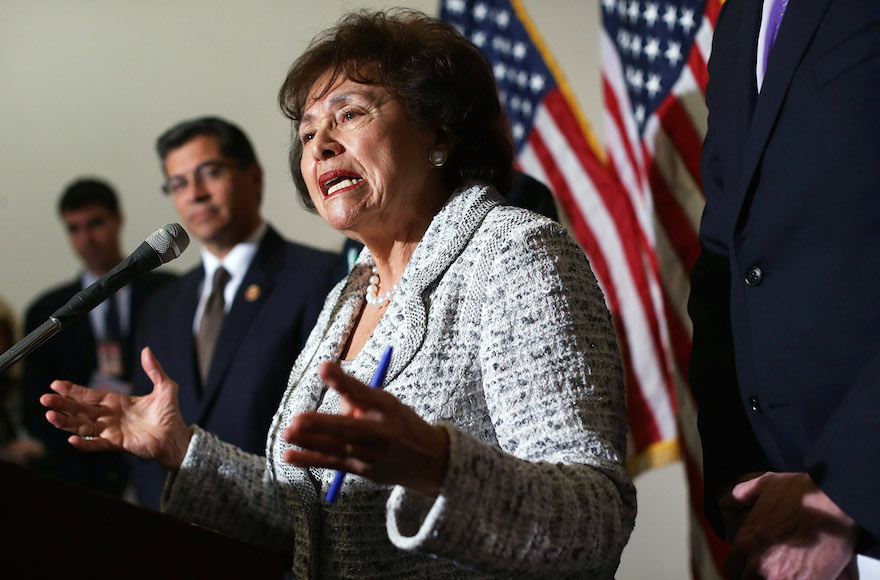 Rep. Nita Lowey speaks after a House Democratic Caucus meeting on Capitol Hill, Jan. 15, 2013. The New York Jewish Democrat is among the lawmakers pushing a bill for the U.S. to invest in Palestinian enterprises. (Alex Wong/Getty Images)

WASHINGTON (JTA) — A bipartisan slate of lawmakers in Congress introduced a bill that would invest in businesses in the Palestinian areas — a bid to replace some of the massive cuts in assistance imposed recently by the Trump administration.

Under the measure, the United States would contribute $50 million a year to investments in the Palestinian areas and seek private sector partners for additional investments.

“This bipartisan bill is a genuine attempt by the United States to regenerate our historic role in finding creative and imaginative pathways to secure a sustainable peace,” Rep. Jeff Fortenberry, R-Neb., said in a statement released Tuesday jointly with Rep. Nita Lowey, D-N.Y., his partner in introducing the bill. “This starts by re-creating new and better economic and interpersonal linkages for prosperity and interconnectedness between the region’s peoples.”

“I have always believed that a two-state solution is the only framework that would lead to two states for two peoples,” Lowey said in the statement. “But this dream will only be realized through efforts on the ground to stimulate economic development and community ties between Israelis and Palestinians.

The statement says the bill has the backing of centrist Jewish groups, including the American Jewish Committee and the Jewish Council for Public Affairs.

The measure comes on the heels of the Trump administration slashing aid to the Palestinians, which last year was around $300 million. All that remains of the assistance is the $50 million or so that goes to the Palestinian security services, a line of funding that Israel’s security services see as critical to keeping the West Bank quiet. Tens of millions of dollars in humanitarian assistance, including for Palestinian hospitals, is out.

The Trump administration also cut out $300 million in funding for UNRWA, the United Nations agency that administers assistance to Palestinian refugees and their descendants. The Palestinians riled President Donald Trump in December by walking away from efforts by his son-in-law, Jared Kushner, to revive peace talks after Trump recognized Jerusalem as Israel’s capital.

Trump and Congress also have taken measures to slash funding as a means of penalizing the Palestinian Authority for continuing to pay the families of Palestinians who have been killed or captured for attacking Israelis.

Notably, the bill would seem to restore funding for Israeli-Palestinian dialogue; the Trump administration cut off $10 million in dialogue funding. The Alliance for Middle East Peace, which helps facilitate the funding for dialogue groups, also backs the bill.

Separately, Jason Greenblatt, the top U.S. Middle East negotiator, told an Israeli news site that the Trump administration was dedicated to an outcome that would unite West Bank Palestinians and Gaza Palestinians under a single authority.

“Our peace plan intends to bring them together,” Greenblatt told Ynet. “Make no mistake; we are in this to help all Palestinians, in both the West Bank and Gaza.”

Kushner, Greenblatt and their team have yet to release the plan, but a number of their interlocutors have suggested that it appears as if it will break up the Palestinians into smaller autonomous entities. Trump has said the plan will be published by early next year.