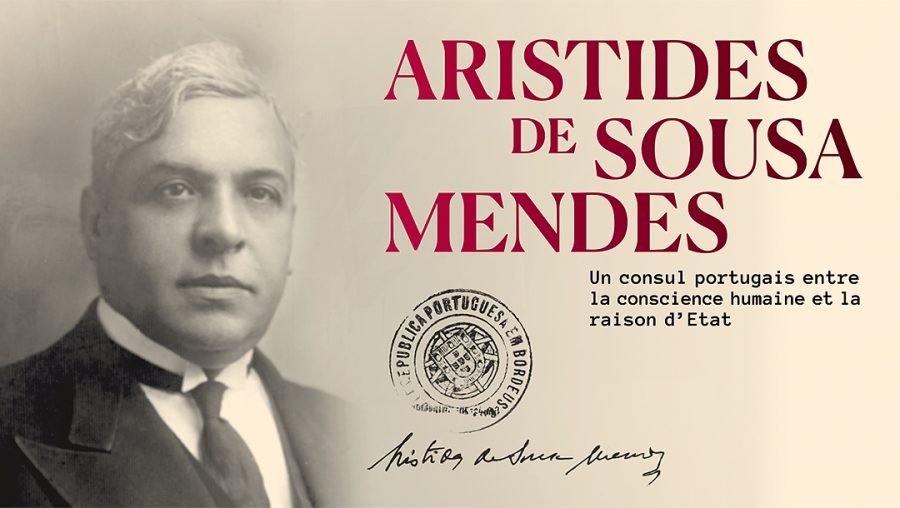 A poster advertising an exhibition in Luxembourg on the actions of Aristides de Sousa Mendes. (Courtesy of the government of Luxembourg)

(JTA) — The government of Portugal honored the memory of Aristides de Sousa Mendes, a diplomat who saved thousands of Jews during the Holocaust, at a ceremony in Lisbon Tuesday.

President Marcelo Rebelo de Sousa was among the many dignitaries who attended the ceremony at the National Pantheon, a former church in Lisbon where national heroes are commemorated.

The parliament at the National Assembly in Portugal’s capital decreed the honor unanimously last year, voting to add a monument honoring de Sousa Mendes to the statues already on display there.

“Aristides de Sousa Mendes changed Portuguese history in that tragic moment,” Rebelo de Sousa, the president, said during the ceremony, according to the SAPO public broadcaster which aired the ceremony live. Portugal is “eternally grateful to him,” the president said.

In 1940, de Sousa Mendes served as consul in Bordeaux, France, where he granted visas to refugees fleeing the Nazi advance. He is estimated to have saved 30,000 people, including 10,000 Jews.

Mendes was eventually suspended and fired from Portugal’s diplomatic service for his actions in Bordeaux under the dictatorship of Antonio de Oliveira Salazar. However, he was posthumously vindicated and recognized in 1966 as a Righteous Among the Nations, a title conferred on behalf of the State of Israel by the Yad Vashem Holocaust museum in Jerusalem to non-Jews who risked their lives to save Jews during the Holocaust. Mendes, who died in 1954, was the first diplomat to be recognized with the title.

He has received several honors in his native Portugal, including by the national airline TAP, which named an airplane for him in 2014.