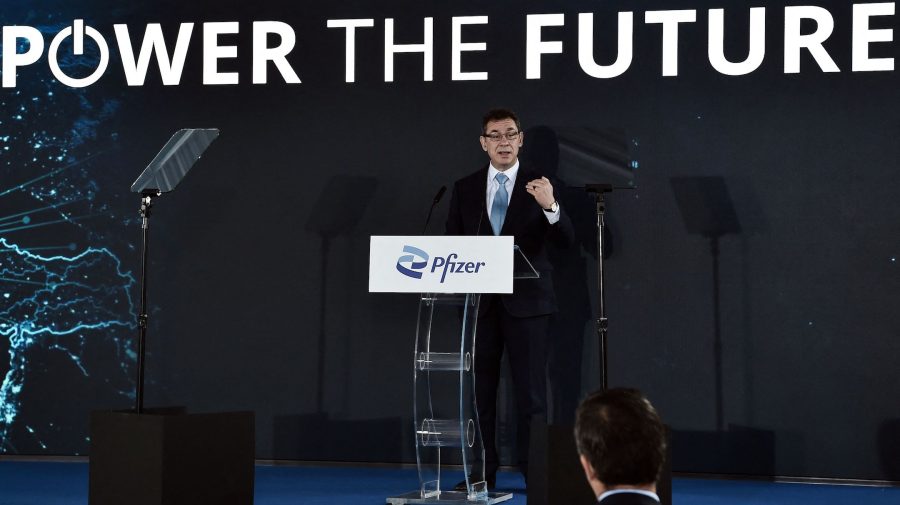 (JTA) — From the halls of the United States Capitol to the streets of Europe, politicians and activists protesting against vaccine requirements have increasingly invoked the Holocaust.

Some are wearing yellow stars, while others are sharing Nazi-era medical documents and comparing themselves to Anne Frank. The comparisons often draw sharp rebukes from Jewish groups and Holocaust museums and educational organizations.

Dr. Albert Bourla is also troubled by this trend — and few people are more personally connected to the topic. Bourla is the son of two Holocaust survivors, and he is the CEO and chairman of American pharmaceutical giant Pfizer.

The Pfizer-BioNTech COVID-19 vaccine was the first to be authorized by the Food and Drug Administration, first for emergency use in December 2020 and then for full approval in August 2021. It’s also the vaccine that Israel has given to its citizens, some now for the fourth time.

Bourla’s family history — paired with his work — give him a unique perspective. It’s personal.

“They are stupid people, those that make these comparisons,” Bourla told the Jewish Telegraphic Agency. “It’s disgusting to say that a request to protect the health of others by wearing masks or protect the health of yours and others by getting vaccinated, can compare with if you are Jewish, gypsy or homosexual, you are sent in a concentration camp. This is ridiculous to even make those accusations.”

Bourla understands those who are afraid of the vaccines — fear is human, he said. He suggested that a more comprehensive educational campaign is needed to address the spread of vaccine misinformation. But to compare public health guidelines to the Holocaust, he said, is an insult to the victims.

Earlier this month, Bourla was named the winner of the 2022 Genesis Prize, the “Jewish Nobel” that “honors extraordinary individuals for their outstanding professional achievement, contribution to humanity, and commitment to Jewish values.”

“It’s an incredible honor to me,” Bourla said. “I was really surprised when I saw my name nominated, particularly when I saw the list of people who either had received it or in this case were nominated together with me.”

The award includes a $1 million prize, which Bourla is dedicating to Holocaust memorial initiatives. Bourla is the ninth winner of the annual award given by the Genesis Prize Foundation; each winner has donated the money or had it distributed in their name. The prize money is awarded from an endowment created by a number of Russian-Jewish philanthropists.

Bourla received the most votes in a global digital campaign conducted by the foundation, during which 200,000 people in 71 countries voted, according to the award announcement. Bourla was then unanimously endorsed by the award’s selection committee. The award will be formally presented to him by Israeli President Isaac Herzog at a ceremony in Jerusalem in June.

“It’s a great, great honor, which I accept on behalf of everyone at Pfizer,” said Bourla.

In its announcement, the Foundation highlighted Bourla’s leadership, determination, and “his willingness to assume great risks.”

Reflecting on the past two years, Bourla said that taking risks was the only option in developing the vaccine.

“Everything, the world, the way we knew it, was collapsing,” he said. “The only way that we would be able to do something so challenging, so visionary, so unprecedented, was if you take a lot of risks.”

Chief among them, Bourla said, was selecting the mRNA technology that the Pfizer (and Moderna) vaccines utilize. A then unproven technology, Bourla said mRNA – using the information in genes to create a vaccine blueprint blueprint – was not the obvious choice. But it worked.

“That was a clear indication of willingness to take risks,” Bourla added.

Bourla has worked for Pfizer since 1993, when he was first recruited from Greece to join the company’s animal health division. In the three decades since, Bourla has lived in nine cities in five different countries, working across departments at Pfizer and moving up the ranks, finally ascending to CEO on Jan. 1, 2019 — less than a year before a potent new coronavirus was documented in China.

As the leader of a global health company whose stated purpose is the “relentless pursuit of breakthroughs that change patients’ lives,” Bourla noted the overlap between his work and his Jewish values. He referenced the Talmudic teaching that one who saves a life has saved an entire world.

“That’s a big essence of Jewish values, and it is embedded into what Pfizer is doing,” Bourla said.

Bourla is a native of Thessaloniki, Greece, formerly home to one of Europe’s most vibrant Jewish communities. His parents both survived the Nazi occupation of Thessaloniki, each with a remarkable story. Bourla with his parents, Mois and Sara Bourla. (Courtesy of Albert Bourla)

Bourla’s father and uncle happened to be out of the ghetto on the day the Nazi forces surrounded it. When they returned to the ghetto, they asked their father, Bourla’s grandfather, what was happening. “Just disappear, go,” he told them, Bourla recounted. That afternoon, the whole ghetto was marched to a train station — on their way to Auschwitz.

“Once the war was over they came back, they found nothing,” Bourla said about his father and brother. “They started building [their lives] from scratch.”

Bourla’s mother has an even more dramatic story.

First, much of her family was sent to Poland, where they would all be murdered by the Nazis. She stayed in Greece with her sister and brother-in-law, spending most of the occupation in hiding. Toward the end of the war, she was found out and arrested — but at that point, Bourla said, captured Jews were no longer being transported to camps, but rather executed.

Her brother-in-law, who was Christian, bribed a Nazi commander to spare Bourla’s mother’s life — to keep her in prison, but not to execute her. Her sister would wait outside the prison each day to watch the prisoners being taken to execution. When she saw her sister being moved, her husband called the Nazi he had bribed and explained the mistake.

“My mother was lined up in front of a firing squad, and then a BMW arrived with German soldiers,” Bourla said. “They handed the head of the squad a paper, and then they removed my mother and someone else and the rest were executed.”

More than 50,000 Jews from Thessaloniki were murdered during the Holocaust. Bourla’s parents were among the few who survived.

With such a powerful communal and personal story, Bourla said he is committed to helping preserve the Jewish history of his hometown.

“In this city, there is nothing left to remind of the great history of Jews, because of the Holocaust,” he said.

That’s where the Genesis Prize comes in. Bourla is donating his $1 million prize toward Holocaust memory initiatives, primarily in Greece. He said it is “unacceptable” that there isn’t a Holocaust museum in Thessaloniki — and he is working to change that.

Throughout the pandemic, Bourla was faced with what seemed like insurmountable challenges. But he remembers his mother telling him time and again that nothing is impossible.

“Every time I had a challenge in my life and I would tell her, ‘I have this problem in school,’ I still remember her waving her finger in front of my face and telling me, ‘Don’t tell me this is impossible to do. I was in front of a firing squad and I survived. Nothing is impossible,’” Bourla recalled. “I still remember her saying, ‘There is no ‘I cannot,’ there is only ‘I don’t want.’’”

“That created a very strong sense of belonging to me,” he said. “I had a very strong Jewish identity, and a sense that I want to work with others to make sure that those things never happen again, to us or to others.”