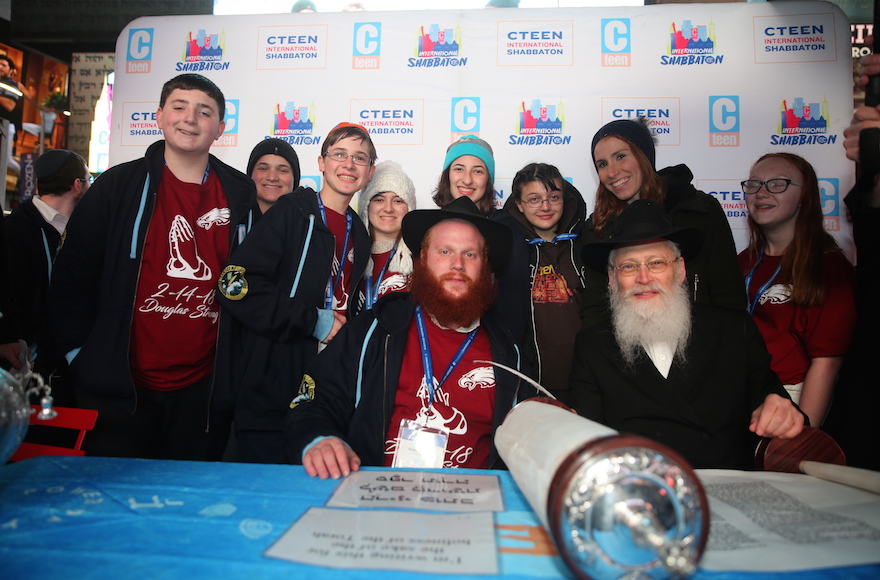 (JTA) — Seven survivors of the Parkland school shooting were among thousands of Jewish high school students who attended the annual conference of the Chabad movement’s youth group.

Responding to the Feb. 14 shooting became an impromptu theme of the conference, which was hosted in New York City by CTeen, the teen arm of the Hasidic outreach movement. CTeen, which has 100,000 members worldwide, has eight chapters in the South Florida area surrounding Parkland.

The shooting, which killed 17 students and staff at Marjory Stoneman Douglas High School, has galvanized a youth-led movement for gun reform. But the students at the conference, each of whom had taken part in previous local Chabad activities, said they appreciated the opportunity to grieve and be comforted.

“We all have been feeling better because we’ve been with other teens who have been supporting us,” Marc Susskind, 14, told JTA. “They’ve been checking in on us, keeping us company.”

On Saturday night, the conference held a moment of silence in Times Square for the murdered teens, and the next day began a campaign for members of the youth group to fulfill one Jewish commandment, or mitzvah, in the teens’ memory. The group also called for schools to institute a moment of silence at the beginning of the day.

Both the mitzvah campaign and the idea of a moment of silence in public schools — in place of prayer, which is prohibited — are longtime Chabad causes. The movement often encourages doing Jewish rituals, such as lighting Shabbat candles or laying tefillin, as a response to tragedy.

“Teens are the leaders of today, not the leaders of tomorrow,” he said. “Many of them are embracing that. The Parkland event is something that brought this onto the national stage. Teens might be getting a bump in being able to mobilize because a lot of people are looking toward them and seeing what they’re going to do.”

Other Jewish youth groups are explicitly supporting the gun control campaign. According to the New York Jewish Week, the teen arms of the Reform, Conservative and Modern Orthodox movements have all signed onto the effort.

“Never before have students across the country mobilized like this, and never before have the eyes of the nation been so closely trained on us as we fight for change,” Zoe Turner, a member of the Reform movement’s National Federation of Temple Youth in Florida, wrote in an essay last week. “A country-wide call to action roars loudly in all of our ears, and NFTY is heeding the call.”

The students at the CTeen conference, which drew 2,500 attendees, said they would also be engaging in activism, including a march in Washington, D.C., scheduled for March 24. But this weekend, Parkland survivors said, they were just grateful to be among friends who comforted them.

“Everyone knows about the incident and everyone is going to help reconnect,” said Maverick Reynolds, 15, who heard gunshots while hiding in a nearby classroom. “We knew it was real and it was very scary.”