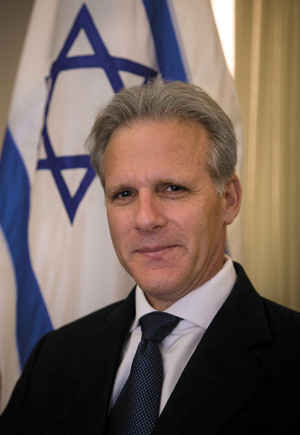 Michael Oren, Israel’s departing ambassador to the United States, said that President Obama is “a true friend” of Israel and that Israeli Prime Minister Benjamin Netanyahu is “committed to peace.”

In a wide-ranging interview Thursday with Haaretz, Oren sounded an optimistic note about the U.S.-Israel relationship and warned of the dangers of a nuclear Iran.

Oren said the alliance between the U.S. and Israel ”did not experience any genuine crises in the past 4 1/2 years,” and that “during the Obama-Netanyahu era there was a whole series of supposed crises, none of which was a genuine crisis. The public atmosphere was one of tension, but behind the scenes we worked together as allies” on a range of issues.

Oren also disagreed with the notion that Obama is unfriendly to Israel, noting that while Obama’s 2009 trip to Egypt made some Israelis uncomfortable, “Obama is a true friend and he is a most serious person and one shouldn’t underestimate him and his determination.”

Oren added, though, that Israel cannot rely on the U.S. to prevent a nuclear Iran.

“The question isn’t whether or not we believe Obama,” he said. “The question is what our responsibility is as a sovereign nation. We cannot outsource our national security.”

Oren said Netanyahu was committed to stopping Iran from obtaining nuclear weapons. He also said the Israeli leader was serious about reaching peace with the Palestinians.

“Netanyahu is aware of the danger posed by an absence of peace, both in terms of Israel’s perceived legitimacy and in terms of the risk to Israel as a Jewish and democratic state,” he said. “I’ve gotten to know him very well in the past four years, and I’m telling you that he is not just paying lip service. He is truly committed to peace.”