Opinion: Josh Mandel wants to be the next Marjorie Taylor Greene. He’s obscuring his Jewishness to do it. 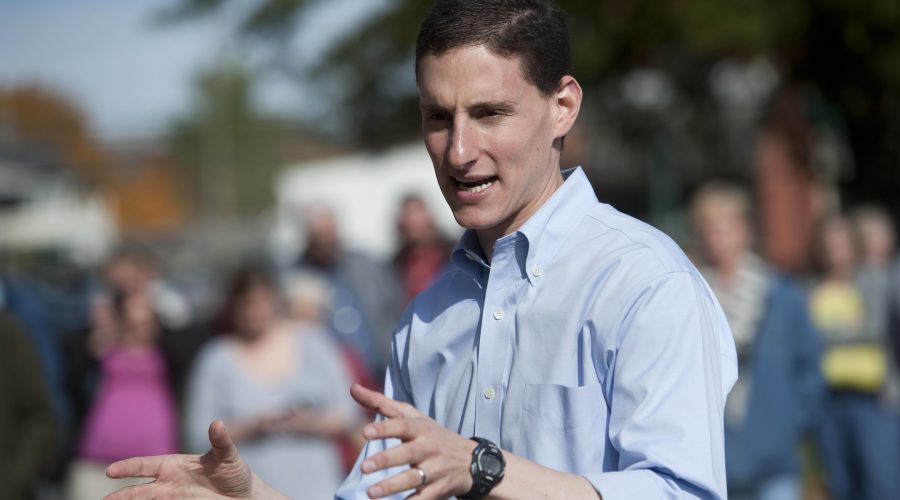 Josh Mandel, a Republican U.S. Senate candidate in Ohio, is an awful amalgam of Trumpism, neo-fascism and faux-nationalism all wrapped in one spiteful 5-foot-8-inch bundle. His own family can’t stand him.

Most of that is just boiler-plate Republican politics at the moment. Sure, Mandel wants to be a clone of Matt Gaetz and Marjorie Taylor Greene, because he clearly thinks that will get him elected. And part of that process, for him, appears to involve refusing to acknowledge his Jewishness. No one should be forced to talk about their religion on the campaign trail. But what is upsetting about Mandel is that he lies and obfuscates about his religion in an attempt to appeal to hyper-conservative voters who more than likely wouldn’t be comfortable knowing that he does not believe in Jesus.

The American evangelicals that Mandel is courting flatly refuse to deny their antisemitism. They tend, instead, to deflect any such accusation by touting their support for Israel. But that conflation of American Jewry and Israel is itself antisemitic: I do not live in Israel, I’ve never lived in Israel, and supporting a country far away from me because Jews also live there does not mean you support Jews.

This is where Josh Mandel comes in. He’s willing to openly support Israel based on religious grounds, to appeal to evangelicals, but every other acknowledgment of his Jewishness is a step too far for him. Once you notice this in his speeches and tweets it’s hard to stop noticing it.

I first was awakened to this pattern when I met Mandel in person a few months ago. I was at a dinner reception and speech he was giving in rural southeastern Ohio, the epitome of Trump country and the seat of Mandel’s evangelical religious base.

To clarify, I am very much not a supporter of Republicans, but for the sake of journalism, I can throw on an ill-fitted suit to listen to their speeches and write about it later.

As Mandel was making his rounds table-to-table, I decided to see what would happen if I asked him about being Jewish. When he got to me, I looked at him, with only a slight smirk on my face, and said, “Josh, it appears we’re the only two Jews here.”

He looked back at me, leaned in as close as possible to my ear, and whispered, “It’s always good to see a fellow Conservative yehudim here. We just need to work on the rest of them.” Then he walked away.

This struck me for a number of reasons. First, the need to lean in and whisper an affirmation of who he was so no one else would hear. Next, the usage of the word “yehudim,” which I’d never heard in this context.

It’s the Hebrew word for Jews, but we don’t call ourselves it. Jews call each other, generally, Jews. We use many other words too, but in all my years I had never before heard a Jew call themselves a “yehudim.” I checked with my Jewish mother, in case there was a generational divide, and she agreed with me that she had never heard it used this way either.

(“Yehudim” is also plural, so there was grammatical awkwardness. Plus it sounded even stranger with the faux southern accent Mandel has taken to using lately.)

I listened to Mandel’s speech that day intensely, as I planned to write about it later, but also to hear specifically what he would say about being Jewish in a room full of non-Jews. The answer is: nothing. Instead, the speech described the quintessential evangelical playbook.

He talked about his campaign being run through churches, described the various pastors who support him, quoted Christian scripture, and said that if elected he’d have, “the Bible in one hand and the Constitution in the other.” If you’d heard the speech, the thought of him being anything but a Christian would be the furthest thing from your mind.

Google will use any excuse to shut down the Pro-Life movement.

They will go to any length to silence those who fight to protect Judeo-Christian values.

Their flimsy arguments in favor of censorship consistently crumble when examined through the lens of Bible and Constitution. https://t.co/6qLMHlybdE

Judeo-Christian values as a whole are almost as fraudulent as Mandel. As Rabbi Danya Ruttenberg wrote on Twitter in January, “‘Judeo-Christian’ isn’t a thing.” Jewish values cannot be lumped in with Christian values because they aren’t the same, and no Rabbi or Judaic-scholar would remotely consider them as such.

If Mandel wants to use this alt-right pandering term, he opens himself up to a fair examination of how he displays — or hides — his religion. A look at his Twitter account, where he makes most of his statements, muddies the question even more.

Writing about Palestinians on Sept. 25, he not only centered Christians in a mostly non-Christian issue, but appeared to conflate being an American with being Christian or Jewish, which is disgustingly incorrect.

The Palestinians are a people from a fictional land who hate everything we stand for as Christians, Jews, and Americans. https://t.co/H38F5DRSSV

Back in July, there was this unhinged take, undoubtedly referring to the Christian Bible.

The Bible and the Constitution are not supposed to be separate.

And on Sept. 3, he again wrote about a Judeo-Christian way of life that never existed.

These planes are now being emptied into Cleveland, Toledo and other places in the heart of America.

To protect our kids, our communities and our Judeo-Christian way of life, we must FIGHT this with all our might. https://t.co/Cnu2L1PZ82

I could link dozens more of these tweets. Over and over, they show Josh Mandel deliberately hiding the fact that he’s Jewish in favor of a return to the Judeo-Christian value set of a fantasy land.

The reason could not be more clear: his courting of evangelical voters who wouldn’t support him if he were Jewish. If you have to make up a belief system to win their support, I’d argue it’s not worth having. But Mandel cares about only one thing in this world: winning his next election.

If there’s one silver lining to Mandel’s hateful candidacy, it’s that it helps make the point that the Republican Party is not the place for proud Jews. It is a party where vitriolic hatred of Muslim is deemed acceptable, and that hatred can just as easily target Jews.

We’re three years removed from a deranged alt-right gunman murdering 11 Jews in a synagogue, and not one thing in those alt-right communities has changed. The biggest change is people like Mandel craving to be accepted into the worst of society. They won’t let him in with full acknowledgement of who he is, but whether he grovels in the church risers or not, Josh Mandel will never be one of them.