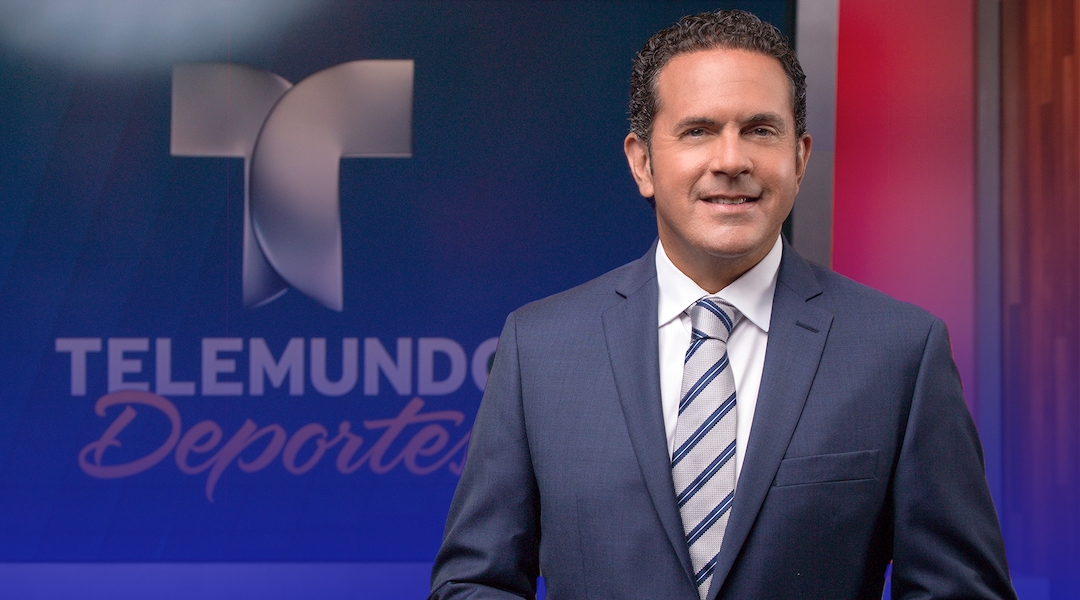 (JTA) — Viewers of soccer on Telemundo are likely familiar with the “gooooooooaaaal” call that their announcers helped make famous. Those who’ve watched that American Spanish language network during a World Cup, Olympics or other major soccer tournament have probably heard Sammy Sadovnik call a game.

Sadovnik is a play-by-play announcer who has been with Telemundo since 2007, but he’s covered sports since 1989. He’s also a proud Jew from Peru who visits Israel every year, and a mentee of Andres Cantor, the Jewish Telemundo announcer who perhaps is most responsible for popularizing the “gooooaaaal” call in the English-speaking world.

Starting early next month, Sadovnik will be part of the network’s crew for the FIFA Women’s World Cup in France, where the U.S. team will try to defend its title.

The Lima native launched his career in journalism at age 14. His parents also were born in the capital city, but his grandparents on both sides immigrated from a small town on the Moldova-Romania border called Lipcani. He attended the one Jewish day school in Peru, Colegio León Pinelo, and then college at Universidad Particular San Martin de Porres, where he studied communications.

After years as a disc jockey on Peruvian radio, he moved to TV.

“In 1989, when the network canceled my music shows, I switched to sports and soccer, and I’ve continued with soccer [since] 1990,” he said.

Growing up, Sadovnik said, there were almost 5,000 Jewish families in Peru. Now there are only around “a thousand families, and I may be exaggerating, maybe 800 families. Now it’s a small community,” he said.

Sadovnik said the Jewish community in Lima is dwindling “due to economic and terrorist problems.” Many Peruvian Jews move to Israel, or to the United States or Canada. (The U.S. State Department said in a March report that there is “serious risk from crime in Lima,” and JTA reported a Pervuian Jewish tour guide saying in 2002 that “today we’re working on survival.”)

Sadovnik himself moved to the United States in 2000 — in December 1999 he married a “nice Colombian Peruvian Jewish girl.” He also makes yearly trips to Israel to connect with his roots.

His first job in the States was working on the radio with Cantor as a broadcaster on Cantor’s Fútbol de Primera, a Spanish-language American radio network based in Miami. He also worked for GolTV, a cable soccer channel. Later he joined Cantor at Telemundo.

Sadovnik speaks highly of Cantor, one of the best-known sports commentators in the world.

“He’s my boss here on the radio, and he’s my colleague at Telemundo, so he’s a mentor — or older brother — for me,” Sadovnik said. “He opened the door. He was the first guy to open the door [for me] when I moved to the States.”

Sadovnik isn’t shy when it comes to speaking about his Jewish identity. He observes most holidays and sometimes Shabbat.

“We almost have a minyan in the sports department!” he joked about Telemundo. Two other commentators there are Jewish — Cantor is from Argentina and Miguel Gurwitz is from Mexico.

Even though all the Telemundo play-by-play announcers (Copan Alvarez joins Sadovnik and Cantor) use the drawn-out goal call, Sadovnik says they do it slightly different.

Watch him in action (it’s worth watching the full video):

To prepare for a game, especially for a tournament as large as the World Cup, Sadovnik begins days before a match. He reads profiles of each player, and makes sure to watch the last two games played by each team.

“We try to watch as many of the games as possible,” he said. “Who kicks the ball with their left foot? What are the [players’] nicknames?”

Calling a game is not just narrating what you see — it’s a form of storytelling, Sadovnik explains.

“We try to [bring] the emotion and excitement of the game to the audience,” he said. “The easiest way to connect with the audience is simple language.”

As one of Telemundo’s three main play-by-play announcers, Sadovnik was at the center of the 2018 World Cup in Russia — his seventh time calling the men’s tournament (his first was in 1994). France will be his third women’s tournament.

Is there a difference between the men’s and women’s competitions?

“No,” Sadovnik said definitively. “The sport is the same, the players, it’s 11 versus 11. I mean, 99 percent [of the time] we call men’s games, but it’s the same sport and the same passion for the soccer.”