‘One Jewish Boy,’ an English play about a mixed-race interfaith couple, sold out shows — and ignited a storm of anti-Semitism

(JTA) — Stephen Laughton is a British-Jewish playwright on the road to stardom. His third play, “One Jewish Boy,” received rave reviews a little more than a year ago when it ran at the Old Red Lion Theater, a London equivalent of an off-Broadway house.

It was so successful, in fact, that it scored a movie deal, a national tour and, starting Tuesday, a run in a prestigious West End theater.

One more thing: The play also unleashed the rage of anti-Semitic trolls.

“I was shocked,” Laughton, 39, said in a telephone interview with the Jewish Telegraphic Agency from his office at New York’s Museum of Natural History, where he is a writer in residence. “I thought I’d get a bit. But I didn’t expect how virulent they were.”

Posters of the play were defaced, ripped down, urinated on. Anti-Semitic screeds were posted on social media: “Who cares about Jews. This looks shit”; “Perhaps you could write a play about Palestinian kids getting blown to pieces by Jews”; “You’re a f***en enabler. You Jews disgust me.”

There were threats of physical violence and, worse, some crazies discovered his home address.

“I was getting [letters] to my house,” he said.

The irony is that this visceral and irrational hatred hurled at Jews is at the very center of “One Jewish Boy.” The protagonist Jesse is Jewish and married to Alex, a mixed-race woman. Both have experienced hatred, though from different perspectives. 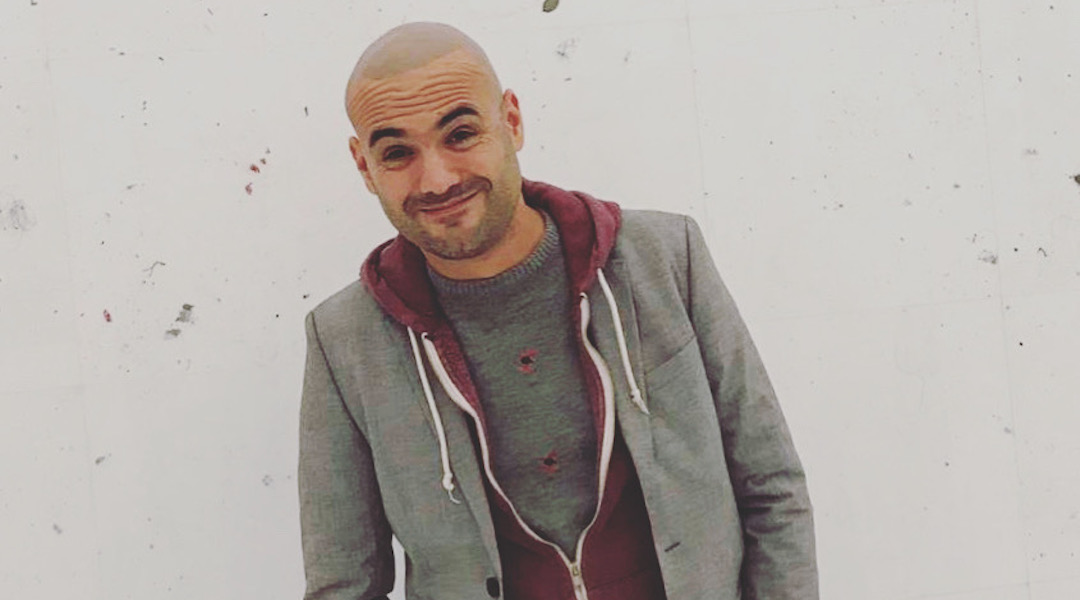 Stephen Laughton didn’t expect his play to trigger a deluge of anti-Semitism. (Courtesy of Laughton)

Because he was violently beaten in an anti-Semitic attack in London, Jesse’s fear of the non-Jewish world becomes obsessive and eventually affects their marriage.

The play skips alternately from their initial meeting at a resort to courtship, marriage, parenthood and ultimately separation. The relationship explores different interfaith and interracial issues — Alex admits that she wouldn’t want to circumcise their child and Jesse crosses the road after seeing a black man he finds threatening.

Alex isn’t the only one bothered by Jesse’s attitude. His fixation on his internal angst makes him less than likable. When that’s pointed out to Laughton, he agrees — in fact, he rewrote the part for the West End version to make Jesse more palatable.

“It did work in the room. Audiences did like him. But it was a failure on my part,” Laughton said. “I held him too close. I only let the fear come out of him. That fear undermines him.”

Laughton insists that he is not Jesse but adds: “Some of his fears are potentially based on me.”

The playwright has been harassed because of his identity, including while working for the BBC in the summer of 2014, during the armed conflict between Israel and Hamas. Tensions were high at the BBC offices, and it didn’t help that activists regularly held competing pro-Israel and pro-Palestinian rallies. Both sides accused the BBC of bias.

One time he was accosted at a rally.

“I’m walking out onto the plaza where there was a pro-Palestinian rally was going on. This kid who absolutely was not Palestinian, he was Caucasian, hands me a flyer,” Laughton recalls. “I reach for it and he sees I have a tattoo on my wrist. It’s the Hebrew word ‘herut,’ which means freedom. He asks me what language that is, and when I say Hebrew, he asks me if I’m Jewish, grabs my wrist, lifts it in the air and says, ‘We have a Jew.’”

Laughton escaped unharmed, but the sense of rage and fear he felt in the moment stuck with him. Growing up in Worcester, England, with a Greek Cypriot father and a Jewish mother, he didn’t feel very connected to Judaism or his Jewish identity. 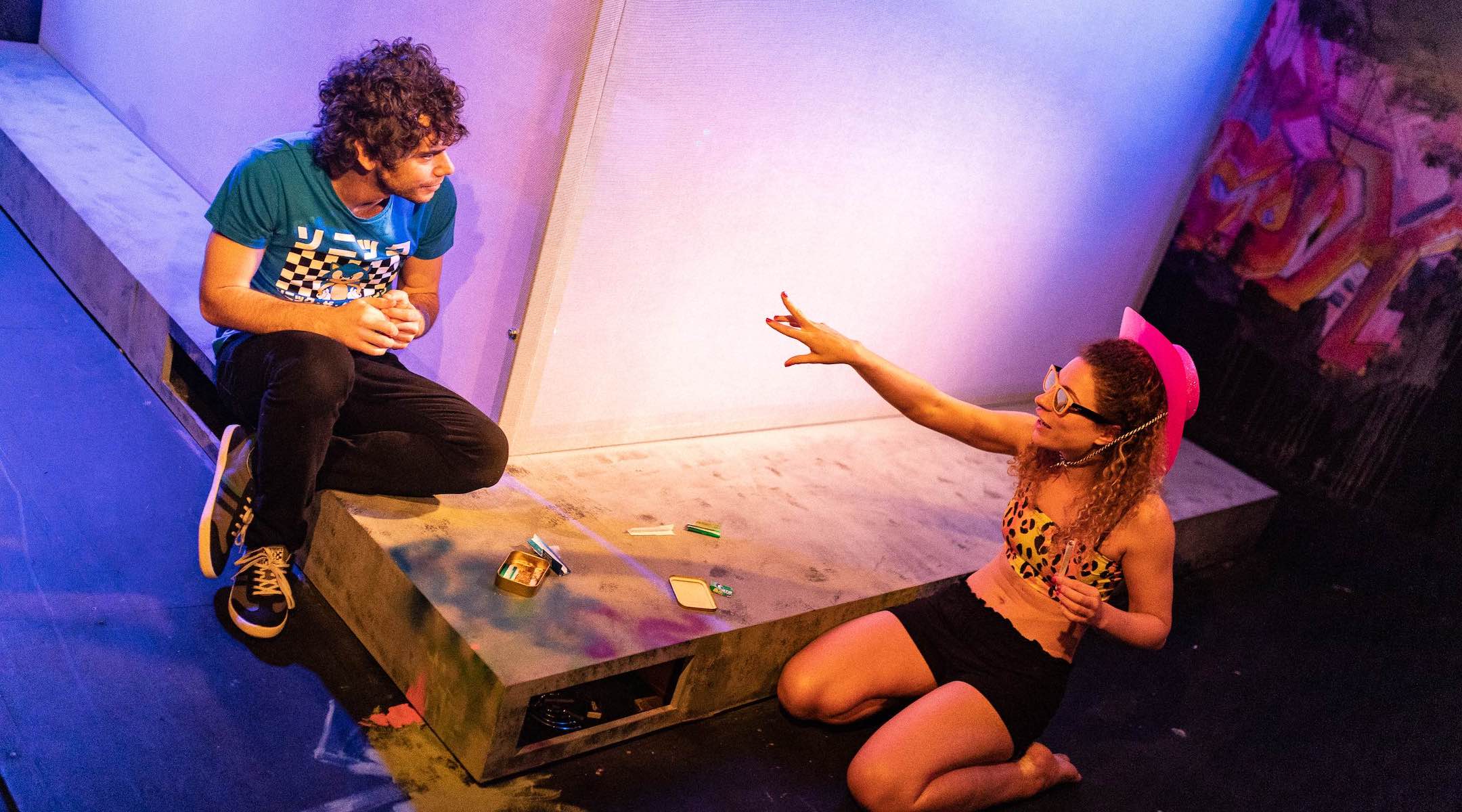 The play explores issues that come up in an interfaith and interracial relationship. (Alex Fine)

He says he always “felt it was deep in in me,” but it wasn’t until after Laughton moved to London in his 20s, where “there were more Jewish people around,” that it began to emerge.

“The Jewish side of me began to win out,” he said.

These days, Laughton thinks the anti-immigrant rhetoric surrounding Brexit has “given voice and permission to racism” and “made anti-Semitism respectable.” England has been shaken up by a years-long anti-Semitism controversy involving the country’s liberal Labour Party, which until recently was the political home of most British Jews.

Laughton has tried to reach out to some of the anti-Semites he has crossed paths with online. During the Red Lion run, he even invited some of those “who had a go at me online” to be his guest at the show and sit next to him. He believes some of them showed up to past performances.

Laughton only asked them in his invitation that if they had a problem with him to just get up quietly and leave without disturbing the show.