Oh. My. Gawd. Janice from ‘Friends’ is a choir director. Maggie Wheeler, right, and Emile Hassan Dyer are the co-founders of the Golden Bridge Community Choir in Los Angeles. (Courtesy of Wheeler)

(JTA) — Ask actress Maggie Wheeler what her most iconic character — that would be Janice Hosenstein Litman Goralnik from “Friends” — would say about her current “role” as a choir director and, well:

As it happens, however, Wheeler’s voice sounds nothing like the beloved, braying “Friends” regular.

And she’s passionate about it, too.

“Music has been my soul food,” she said. “I’ve always loved gospel music and spirituals and the music of Africa.”

In fact, Wheeler is a founder and director of Los Angeles’ Golden Bridge Community Choir, an inclusive, non-auditioned choir. Golden Bridge is a member of the Ubuntu Choirs Network, an international organization of socially engaged choirs that embrace that “singing is an essential human birthright” and together, regardless of musical background, individuals can help improve the world by joining voices in song.

Ubuntu, Wheeler explained, is a term from Southern Africa that means “human kindness.”

“The spirit of Ubuntu is about sharing a bond,” she said. “On a personal level, the Golden Bridge Community Choir aims to connect people by joining their voices in song.”

It’s an ideology that resonates deeply with Wheeler. Quoting from Simon Jacobson’s book “Toward a Meaningful Life: The Wisdom of the Rebbe Menachem Mendel Schneerson,” Wheeler noted that “every human being, man and woman, was created for the same purpose — to fuse body and soul in order to make themselves and their world a better and holier place.”

Wheeler, who was born Margaret Jakobson, was raised in a secular Jewish household in Manhattan.

“My siblings and I grew up in a creative home full of eclectic influences,” she said.

Her choir reflects that: In addition to gospel, they do songs and rhythms from around the world, including West and South Africa, Australia and Asia. (Proceeds from the choir’s concerts support orphanages in South Africa.)

One of the standards in the choir’s repertoire is “The Contemplation Chant,” by Sophia Roberts, aka Sophia Songhealer. According to Wheeler, it is an uplifting, spiritual psalm that incorporates the lyrics and melodies from five religions: Judaism, Christianity, Islam, Buddhism and Hinduism.

“But I don’t select songs based on any one religion,” she said. “I scour the world for music that strikes me at some kind of emotional level, that touches my heart.”

“Music provides an opportunity for people to come together and create something beautiful,” she added. “When that occurs, there’s a profound, deep connection made. The power of song is transformational.”

Of course, what has also been transformational in Wheeler’s life was landing the Janice role on “Friends,” whom she portrayed 19 times during the show’s 10-year run. Wheeler told JTA she “had no sense” that her character would have such an enduring impact.

“When you’re in the middle of things, while you’re filming, you just don’t think like that,” she said. “I’m just thrilled that the writers and our audience loved her so much.

“Janice has been very good to me,” Wheeler added. “I am so glad people connected with her.”

But while film and television work is what she is best known for — she’s also had recurring roles on “Everybody Loves Raymond” and “Californication,” among others — it’s only one of the ways Wheeler enjoys connecting with others. Her lifelong love of singing is another.

She’s been singing since the age of 7, when her parents began sending her to Camp Killooleet in Vermont. Owned and operated by the legendary folk singer Pete Seeger’s brother, John, Wheeler said the camp was inspirational.

“Sitting around campfires and singing songs was a piece of heaven for me,” she recalled.

Wheeler has also been passionate about a cappella music since her early 20s, when she met members of the ensemble Sweet Honey in the Rock while seeking refuge during a rainstorm at an outdoor music festival. Finding shelter in the group’s tent, Wheeler and others were introduced to the power of song.

“It was a life-changing moment for me,” she recalled. “The energy in that tent just exponentially grew and grew. It was like we were raising the roof. It was at that moment that I first felt what the power of singing could do.” 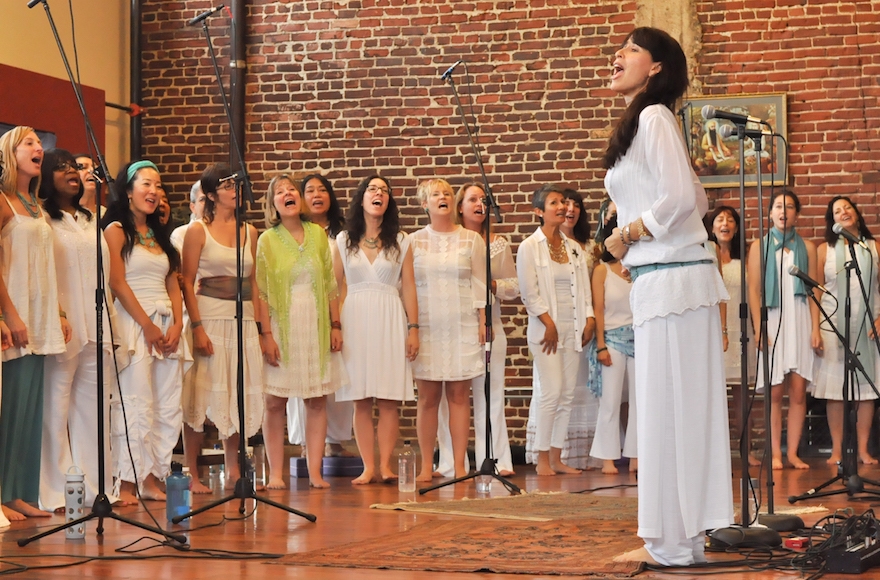 Maggie Wheeler leading the non-auditioned choir in 2013. (Courtesy of Wheeler)

Wheeler and some friends eventually founded a New York-based a cappella group, Sons and Daughters. But as her acting career inevitably took her to Los Angeles, Wheeler had to leave the group.

(Even in Hollywood, however, there were occasions when she could tap into her passion — like when her friend, actor David Duchovny, asked her to arrange and perform an a cappella version of “Michael, Row the Boat Ashore” for an episode of “The X-Files.”)

Make no mistake, Wheeler is still passionate about acting.

“I’ve been on a roller coaster as an actress throughout my whole career. What sustains me is my other creative outlet — my music.”

In addition to Golden Bridge, Wheeler and choir co-founder Emile Hassan Dyer teach musical workshops, “Singing in the Stream,” with the aim to “open hearts and bring us closer to understanding our interpersonal and global connections,” she said.

Wheeler has been married to her husband, Daniel — an award-winning sculptor with an affinity toward ceremonial objects and spaces — for 26 years.

“As a couple, we’re both involved and invested in creating spaces for people to express themselves,” she said proudly. “He with his art and me with my music.”

They are also the parents of two daughters, ages 16 and 21.

There is clearly a lot more to Wheeler than meets the eye (or ear). She’s not only a double threat — a singer and an actor — but she actively encourages others to follow their own dreams and journey on their own paths.

“I love this Balzac quote that was shared with me at a pivotal moment,” Wheeler said. “’Vocations which we wanted to pursue, but didn’t, bleed like colors on the whole of our existence.’”