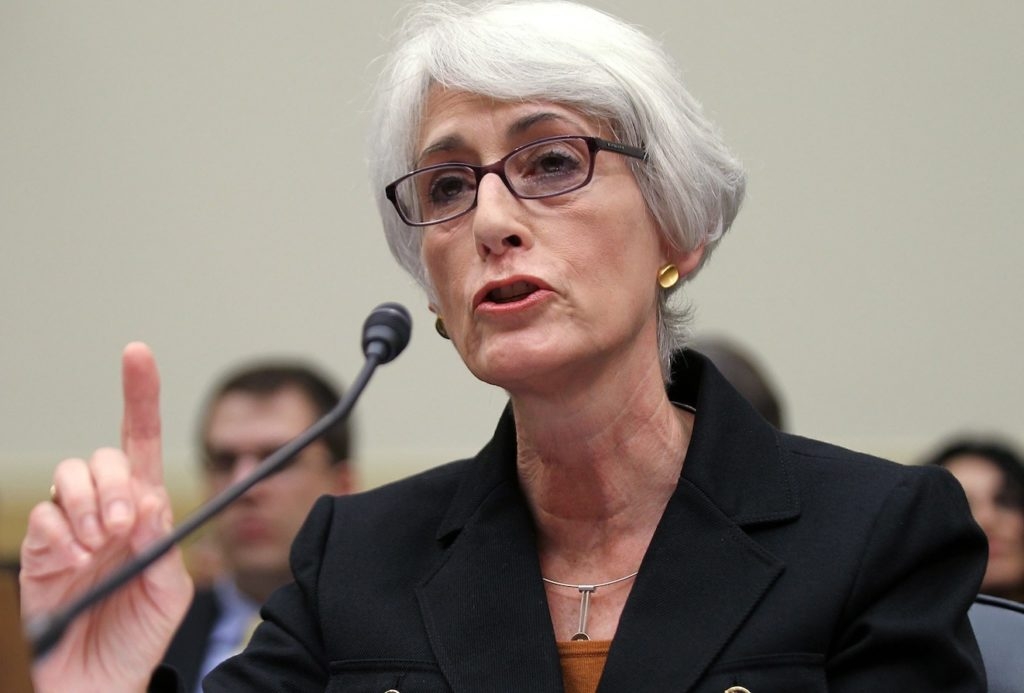 State Department official Wendy Sherman, shown testifying in 2011 before the House Foreign Affairs Committee, said the U.S. ability to enforce Iran sanctions “is being hampered significantly” by the shutdown.

WASHINGTON (JTA) — Is the U.S. government shutdown undermining the sanctions that helped bring Iran to Geneva this week for talks aimed at ending the standoff over its nuclear program?

Top administration officials have been emphatically making the case that it is.

Wendy Sherman, the third-ranked official at the State Department, said in Senate testimony on Oct. 3 that the Office of Foreign Assets Control, the Treasury department that monitors international trade to ensure compliance with the sanctions regime, “has been completely, virtually, utterly depleted at this time.”

“Our ability to do that, to enforce sanctions, to stop sanctions evaders is being hampered significantly by the shutdown,” Sherman said.

It’s not clear how many Foreign Assets Control staffers have been sent home because of the shutdown. A number of reports have suggested the Treasury department overall has furloughed 90 percent of its staff.

But the Foreign Assets Control office isn’t completely inoperative. Since the shutdown went into effect earlier this month, the office has issued one list of entities and individuals designated as terrorists.

The lone employee of Treasury’s communications staff still on the job did not respond to a request for comment.

Some Republicans are skeptical that the shutdown is undermining sanctions, suggesting that the Obama administration is using an initiative with rare bipartisan support to bash the Republicans who brought the government to a standstill.

One GOP staffer said that if a real threat to national security were to emerge, Treasury Secretary Jack Lew could recall furloughed workers just as Defense Secretary Chuck Hagel had done.

“If Secretary Lew were to get briefed that certain people are hurting national security, he has the prerogative to bring them back,” the staffer said.

Still, the warnings from the administration have prompted some concern on Capitol Hill.

“The administration is engaging in its first diplomatic negotiations with Iran under Hassan Rouhani’s presidency, and whether or not we agree with the outreach, we believe that furloughing nearly all of OFAC’s employees makes the U.S. negotiating position weaker,” the letter said.

Rouhani, elected this summer on a platform of reform and outreach to the West, has acknowledged that the devastation wrought by 30 years of U.S.-led sanctions — intensified over the last five years during the Obama administration — helped bring him to the negotiating table.

Wendy Sherman is leading the U.S. team in talks in Geneva this week aimed at arriving at a verifiable agreement that Iran is not seeking a nuclear weapon. Also participating in the talks are Russia, China, France, Britain and Germany.

Joel Rubin, a former Democratic congressional aide and a former U.S. diplomat, said it was unlikely that banks and oil companies adhering to sanctions would start cheating just because the monitoring mechanisms are not operating at full capacity. But the absence of staff is problematic if new issues arise, he said.

“You don’t want to be in a situation where something happens but you could have prevented it because the staff’s not in,” said Rubin, the director of policy at the Ploughshares Fund, a nonproliferation advocacy group.

Pro-Israel officials who monitor sanctions noted that the Office of Foreign Assets Control is not the only arm of the U.S. sanctions monitoring apparatus. Other relevant agencies — including intelligence agencies and the State Department — are running at almost a full complement.

“From what I’ve heard, folks that have active intelligence functions are being asked to continue to serve,” said Jonathan Schanzer, the vice president for research at the Foundation for Defense of Democracies, a group that has taken a lead in advising Congress and the administration on the shape of sanctions.

Colin Kahl, a deputy defense secretary in Obama’s first term who is now a senior fellow for the Center for a New American Security, said the ability of the Obama administration to implement sanctions, or to waive some of them in the event of progress in Geneva, would not take an immediate hit because of the discretion afforded Obama in existing law and his executive powers.

“At least for some period of time, the administration probably has enough discretion to do something on the sanctions front without Congress,” Kahl said in an address Monday to the annual conference of the National Iranian American Council.

Rubin said the shutdown’s bigger hit was long-term — to the U.S. reputation.

“The Iranians are not in a position to worry about whether the U.S. government is in crisis because they’re the ones under pressure, and that’s a good thing,” he said. “But it makes allies nervous and creates an opening for adversaries” such as China and Russia — countries that have only reluctantly joined the pressure on Iran.

“If the shoe were on the other foot and there was a government in turmoil every few months,” Rubin said, “how would the United States relate to that government?”

Ron Kampeas is JTA’s Washington bureau chief, responsible for coordinating coverage in the U.S. capital and analyzing political developments that affect the Jewish world. He comes to JTA from The Associated Press, where he worked for more than a decade in its bureaus in Jerusalem, New York, London and, most recently, Washington. He has reported from Northern Ireland, Afghanistan, Bosnia and West Africa. While living in Israel, he also worked for the Jerusalem Post and several Jewish organizations.