Nudity and neon lights at the annual Israel Festival

JERUSALEM (JTA) – The Israel Festival is the closest thing the Jewish state has to a national art event.

But director Eyal Sher insists it is not government approved. As evidence, he points to the performances lined up for the annual festival, now in its 56th year, showcasing dance, music, drama and performance theater from Israel and around the world. The event will run June 1-18 in Jerusalem.

“Look at the shows we brought,” Sher told JTA. “They’re full of nudity and violence and subjects that people see and say, ‘Oh my God. Can you really do that in Jerusalem?’”

Despite receiving state funding for the festival, Sher said he has never been told what to do in his three years at the helm. Still, he said, attempts by the current right-wing government to influence cultural expression have given the organizers a renewed sense of purpose.

According to Sher, the Israel Festival doesn’t seek to highlight Jewish nationalism or any particularist identity. Rather, the goal is to celebrate the human experience in its singular — and sometimes deviant — forms. Here are some notable works to expect at the festival this year.

More information about the shows and scheduling is available online.

A portrait of an artist with neon eyes 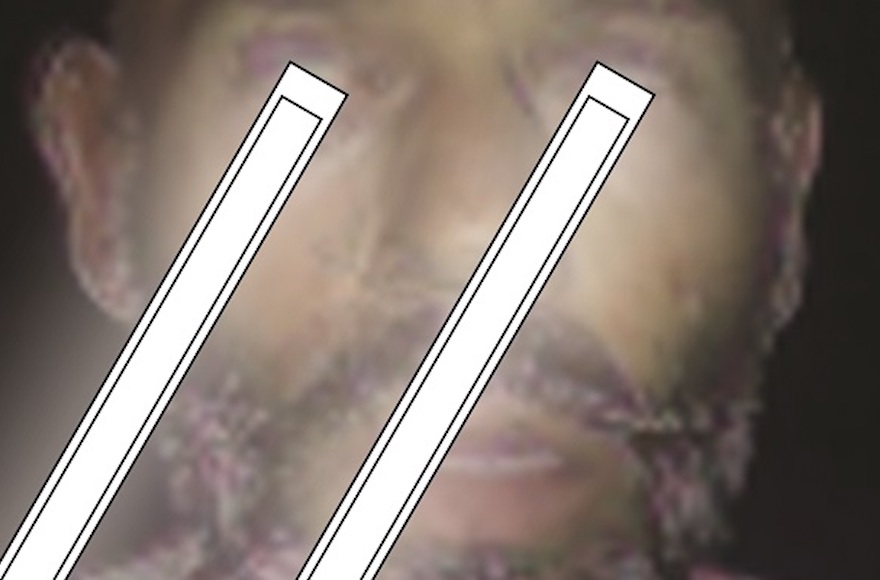 “Light in My Eyes” (Courtesy of the Israel Festival)

Festival-goers will be welcomed to the Jerusalem Theatre, where most of the shows will take place, by a 19-foot-tall self-portrait of multidisciplinary Israeli artist Yochai Matos. Neon lights will emanate from the portrait’s eyes, dazzling those who gaze upon it — hence its title, “Light in My Eyes.”

According to promotional material sent out by the festival, the portrait “examines the relationship between the grandiosity of the theater hall and the transient contemporary artwork.”

Talk about putting the individual front and center.

“It’s like mainlining a mashup of ‘High School Musical,’ an extreme Japanese TV reality show, a cheesy pop video and an outtake from ‘Les Misérables’ in the company of a group of hyperactive under-fives who are having a food fight with the volume pumped up to maximum,” according to The Guardian.

With its focus on technological stimulation and superficial satisfaction, Nikaido both celebrates and savagely sends up the world of Japanese teenage girls and contemporary reality, in general — like it or not, she warns, powerful young women are taking over. Raincoats will be issued to protect patrons from flying water, tofu and seaweed.

French artist Olivier De Sagazan is so desperate to bring his sculpture to life that he climbs inside it, covering himself in clay. As the audience watches his live performance, called “Transfiguration,” he loses his identity and becomes an ever-changing work of art.

“Sagazan delves into this nightmare of shape-shifting and this belief that we have to be a certain way or hold certain ideas,” said Itzik Giuli, the Israel Festival’s artistic director. “Western society is trying to control us. But we see there is a deep need for transformation, transfiguration and transcendence.”

In the end, Sagazan emerges from the clay seemingly a new and liberated man. 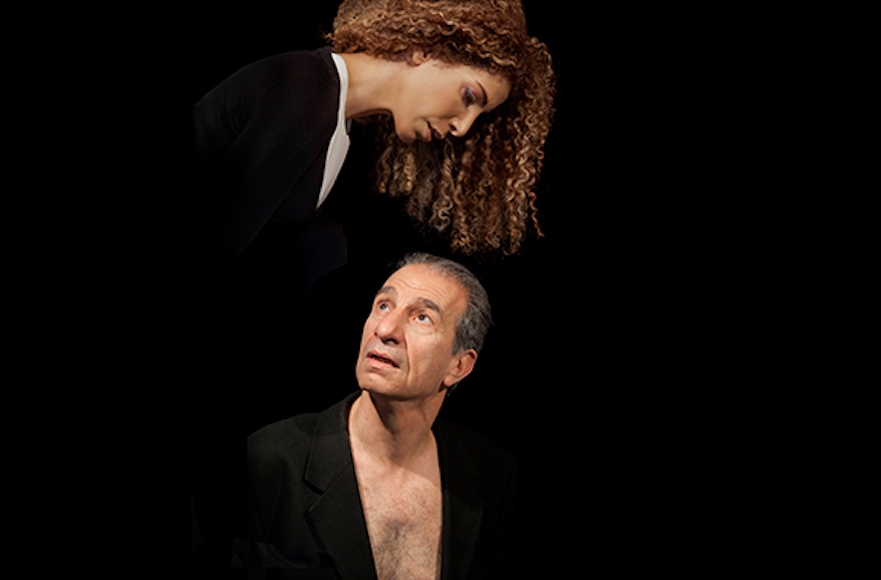 Sasson Gabay, right, and Keren Hadar playing Job and his wife in the opera “Job.” (Courtesy of the Israel Festival)

You know the biblical story. Now check out “Job,” the original Israeli opera.

Job’s wife often gets a bad rap for doubting her righteous husband as God tests him with repeated calamity. But director Yossi Yzraely gives her a voice — in Hebrew.

What will she do with that sword?

In “And What Will I Do with This sword?” Spanish stage performer Angelica Liddell grapples with two attacks in Paris: a Japanese student’s murder and cannibalization of his classmate in 1981 and the November 2015 terror attack at the Bataclan theater.

“Angelica Liddell explores the inexplicable and ineffable through her work,” France’s Les Trois Coups writes. “This hybrid and disturbing artist, virtually a witch, returns with a performance bordering on ceremony, an invitation to come to terms with all that is good and all that is evil in the space of five hours.”

Filled with nudity and violence, the play — in Spanish, Japanese and French with Hebrew subtitles — reminds the audience that the horrors of human nature span all cultures, but so does the capacity for decency.

A man with regrets

American theater master Robert Wilson offers an avant-garde take on Irish writer Samuel Beckett’s 1958 play “Krapp’s Last Tape,” which he directs, designs and stars in. While preparing to record his annual birthday musings, the 69-year-old Krapp encounters a much younger version of himself and is made to reckon with the past three decades.

“Krapp is forced to ask what he knows about his own self,” Giuli says. “Viewers begin to realize that memories make up so much of our identities.”

Looking back on their country’s 69-year history, Israelis may be able to relate. The play will be performed in English with Hebrew subtitles.