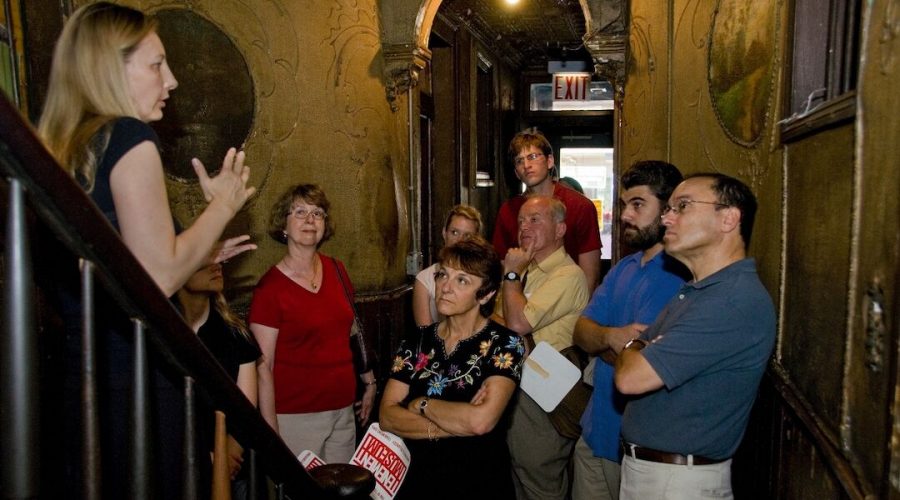 A group takes a tour of the Tenement Museum, which tells the stories of Jewish and other immigrants to New York, in 2008. (Kiko Niwa)

(JTA) — The Tenement Museum, which tells the stories of Jewish and other immigrants who lived on New York City’s Lower East Side, announced that it is laying off its tour guides and other part-time workers — a total of 76 employees.

The museum, like most cultural institutions in New York City, has no firm reopening date.

In addition to tour guides, or educators, the part-time workers include front-desk and retail employees.

The museum’s president, Morris Vogel, also took a 99% pay cut in March. He is being paid $25 a month in order to retain his health insurance.

“Our educators make our programs come to life,” Vogel said in a statement. “They are an important part of the Museum’s success. We had hoped to avoid this drastic step.”

The museum’s federal loan period ends on Sept. 20, but it is hoping to avoid further layoffs afterward by attracting visitors and schools on virtual tours, and conducting outside tours of the neighborhood for single families.

The interior, however, will remain closed indefinitely. Other New York museums, like the Metropolitan Museum of Art and the Museum of Modern Art, have discussed reopening in the coming months. But the Tenement Museum consists of period immigrant apartments from more than a century ago — conditions that would make social distancing impossible.

The layoffs come a few weeks after another Manhattan Jewish institution, the Marlene Meyerson Jewish Community Center, laid off 32 employees and furloughed 40 others.